5 Vegan Foods You Should Skip

People decide to go vegan for different reasons. While some do it solely to support animal rights, others are seeking an overall healthier eating style. Among the latter group, many believe that the word “vegan” automatically means nutritious, and that’s not always the case.

The reality is that packaged foods labeled “vegan” can actually be highly processed and loaded with refined carbs, sugar and even artificial additives. If you’re going vegan for health reasons, here are five vegan products you should skip, as well as better options to try instead.

Ben & Jerry’s recently launched four vegan flavors, including P.B. & Cookies, which packs 290 calories and 22 grams of sugar per half cup. That’s almost 1,200 calories if you polish off the pint!

Instead try: Homemade pops. Whip together unsweetened almond milk and fresh or frozen fruit, like berries or cherries. Then stir in a square or two of chopped dark chocolate, pour into molds, and freeze. You’ll save a ton of calories, take in almost no added sugar, fit in a serving of fruit, and boost your intake of antioxidants.

Instead try: Chocolate-peanut butter strawberries. In a skillet over low heat, warm up a half cup of sliced strawberries with a little lemon water for a few minutes. Transfer the berries to a bowl and top with a tablespoon of peanut butter and one chopped square of dark chocolate. This 175-calorie treat has way more nutrients and antioxidants, and a lot less added sugar.

Health.com: 12 Things You Need to Know Before Going Vegan

A few brands—including Tofurky, Amy’s, American Flatbread, and Daiya—offer vegan frozen pies. But these plant-based healthy dinners are loaded with calories. Daiya’s margherita pizza, for example, contains 390 calories per serving. While that may not seem like much for a meal, keep in mind that one serving is equal to just one-third of the pie. So if you eat the whole thing (and let’s face it, it’s tough to stop after one-third of a pie), you’re looking at 1,100 calories and 159 grams of carbohydrates.

Instead try: Cauliflower crust pizza. After your crust is done baking, load it with lots of veggies, like roasted tomatoes, mushrooms, peppers, and fresh spinach. To replace the creaminess of cheese, I like to top my cooked pizza with chopped avocado. The result is a nutrient powerhouse.

Barbecue
Some vegans tell me they don’t want to eat anything that resembles meat. But others miss the taste and texture. That’s why some non-meat-eaters turn to faux meat products like Morningstar Farms Hickory BBQ Riblets. A single riblet packs 16 grams of protein, but it also contains 35 grams of carbs and 210 calories. Plus it’s made with soy, a food many vegans try to avoid due to intolerance symptoms like bloating, headache, or skin reactions.

Instead try: Bar-B-Que Jackfruit from Upton’s Naturals, which has just 10 grams of carbs and 45 calories per serving. Jackfruit is a meaty-textured tropical tree fruit that’s destined to become a weight loss superfood. But jackfruit is low in protein compared to soy, so pair it with a side of beans. Add a generous portion of salad or grilled veggies for a healthy, balanced meal.

Pumpkin pie is one of my top can’t-live-without foods, and many vegans I’ve talked to agree. Wholly Wholesome makes an egg- and dairy-free version, but just one slice packs 290 calories, 38 grams of carbs, and 18 grams of sugar. And, like the riblet, it’s soy-based.

Instead try: “Liquid pumpkin pie”—aka, a pumpkin smoothie. Whip together ½ cup unsweetened canned pumpkin, 3/4 cup unsweetened almond milk, 1 teaspoon pumpkin pie spice, and 1 teaspoon of maple syrup. You can savor every sip of this generous portion for only 90 calories, 15 grams of carbs, and 9 grams of sugar. If you miss the texture of the crust, sprinkle your smoothie with some toasted, unsweetened shredded coconut, or a “crumble” made from rolled oats mixed with almond butter. 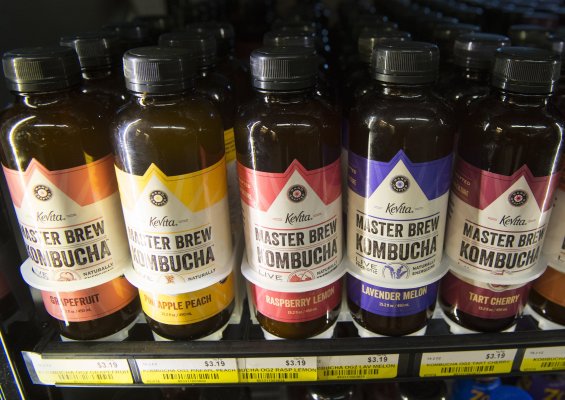 11 Things You Should Know Before Trying Kombucha
Next Up: Editor's Pick