Orlando Bloom plays with pupils of a school in Slovyansk, Ukraine on April 27, 2016.
UNICEF
Ideas
By Orlando Bloom
Orlando Bloom is an actor and UNICEF goodwill ambassador.

A new UNICEF report shows that almost a quarter of the world’s children live in countries affected by crisis.

“How could anybody do this to children?” Those are the words of a kindergarten principal, Lena Antonenko, whom I met in a town called Myronivskyi, near the frontline of the conflict in eastern Ukraine. When the shelling began last year, she took shelter in the basement of the building with a group of terrified children and other teachers. The kids were no older than 5—the same age as my own son. They cowered in the dark on tiny white benches made for toddlers, with no electricity, no running water and nowhere to go to the toilet. Suddenly there were two catastrophically loud bangs. Teachers and children emerged to find walls collapsed, every single window blown out and rubble waist-high in some rooms. This was a kindergarten. The children were obviously hysterical. It is no exaggeration to say that they will never be the same again.

In eastern Ukraine, about one in five schools and kindergartens have been damaged or destroyed in a conflict that has been going on for more than two years now. It seems to be largely forgotten internationally, but about 580,000 children are in urgent need of aid, and 300,000 children need help to continue their education. There are schools still in need of repair. Children need basic educational supplies like pens, books, schoolbags and desks. They also need emotional support to help them cope with the terrifying experiences they have lived through, as well as a chance just to play without being afraid. They deserve a chance to be children again.

Sadly, this situation is all too common around the world. New figures show that nearly a quarter of the world’s school-aged children—that’s 462 million kids—now live in countries affected by crisis. About 75 million of them are in desperate need of educational support.

If an entire generation grows up in crisis, without access to the education they need, what does that mean for their communities? For their countries? Children who are out of school can find themselves in terrible danger. They are easier targets of abuse, exploitation and recruitment by armed forces and groups. They also are not given a chance to access learning that can help them find what they love in life and build a peaceful future for themselves and the people around them.

We have to do better. It’s clear that education can change lives in a disaster. Going to school keeps children safe and gives them a vital routine—just what they need in a time of huge upheaval. UNICEF is doing whatever it takes to get children in humanitarian emergencies back to learning—whether it be by giving children learning supplies, repairing destroyed schools or by training teachers to counsel children through this conflict. But with only an average of 2% of humanitarian appeals being devoted to education—there’s still so much to be done.

Thankfully, there is work going on to change this. A new fund is being launched in just three weeks’ time at the very first World Humanitarian Summit in Turkey: Education Cannot Wait. The aim is to give millions of children living in emergencies access to education.

This is the kind of message of hope that children like those I met in eastern Ukraine need. “We owe these children,” Antonenko said. “Even though we didn’t start this, we owe these children for the rest of their lives for what they have gone through.” 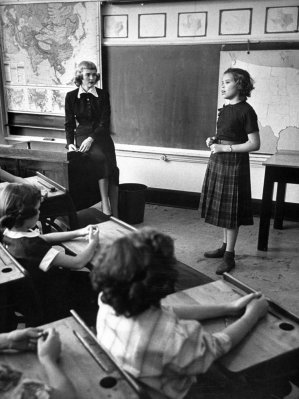 When Schoolteachers Could Win Prizes for Being 'Prettiest'
Next Up: Editor's Pick