Donald Trump and Ted Cruz lobbed petty, gossipy insults at each other Tuesday ahead of the crucial Indiana primary.

Tuesday morning, Trump claimed that Rafael Cruz was with Lee Harvey Oswald shortly before Kennedy’s assassination, a story that originated with the National Enquirer tabloid.

“His father was with Lee Harvey Oswald prior to Oswald’s being—you know, shot. I mean, the whole thing is ridiculous,” Trump said on a phone interview with Fox News. “What is this, right prior to his being shot, and nobody even brings it up. They don’t even talk about that. That was reported, and nobody talks about it. … What was he doing with Lee Harvey Oswald shortly before the death? Before the shooting? It’s horrible.”

Trump’s tale comes from a National Enquirer story that ran last month, purporting to show photos of Rafael Cruz with Lee Harvey Oswald. At the time, the Cruz campaign denied the images were of Rafael, and Tuesday the Texas senator’s team hit back at the GOP frontrunner with a new statement.

“Trump is detached from reality, and his false, cheap, meaningless comments every day indicate his desperation to get attention and willingness to say anything to do so,” Cruz spokesperson Catherine Frazier said, Fox News reports. “We are campaigning on jobs freedom and security while Trump campaigns on false tabloid garbage. And the media is willfully enabling him to cheapen the value of our democratic process.”

At a press conference later Tuesday morning, Cruz scoffed at Trump’s accusation, calling him a “pathological liar” and saying facetiously, “Yes, my dad killed JFK, he’s secretly Elvis, and Jimmy Hoffa is buried in his backyard.”

Cruz also lashed out at Trump on other topics, saying, “Donald Trump is a serial philanderer and he boasts about it. I want everyone to think about your teen-aged kids. The President of the United States talks about how great it is to commit adultery, how proud he is. [He] describes his battle with venereal disease as his own personal Vietnam.” (It’s true: In 1997, Trump told Howard Stern of trying to avoid contracting sexually transmitted diseases: “It is my personal Vietnam. I feel like a great and very brave soldier.”)

Trump then put out a statement painting Cruz as a man on the edge of a breakdown. “Ted Cruz is a desperate candidate trying to save his failing campaign,” the statement said. “It is no surprise he has resorted to his usual tactics of over-the-top rhetoric that nobody believes. Over the last week, I have watched Lyin’ Ted become more and more unhinged as he is unable to react under the pressure and stress of losing… Today’s ridiculous outburst only proves what I have been saying for a long time, that Ted Cruz does not have the temperament to be President of the United States.” 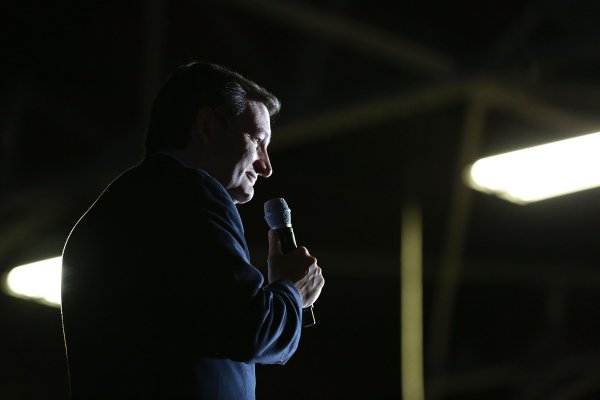