Here Are the Three Planets Most Likely to Harbor Alien Life

There shouldn’t be a reason in the world for you to care about the star known as Trappist-1. Located a comparatively close 40 light years from Earth, it’s a so-called brown dwarf—a Jupiter-sized object that’s so dim it can’t even be seen in the visible wavelength and that burns so feebly its temperature rarely tops 4,400º F (2,400º C). That sounds hot by Earthly standards, but by stellar standards it’s chilly enough to earn the star the label “ultracool dwarf”.

Trappist-1, however, turns out to be ultracool in another way entirely. According to a new study just published in Nature, it is orbited by three planets that may be the most temperate and Earth-like ones ever discovered outside of our own solar system. Where there are Earth-like conditions there could be Earth-like life—and in this case, life right in our cosmic neighborhood.

The research, conducted by investigators from the Massachusetts Institute of Technology, the University of Liège in Belgium and elsewhere, began with extensive observations made by a 60-centimeter telescope in Chile that goes by the somewhat clumsy name TRAnsiting Planets and Planetesimals Small Telescope—hence the TRAPPIST handle that the star now bears, too. The most common method of hunting for exoplanets involves positioning a telescope so that it stares unblinkingly at a field of stars, looking for the slight dimming of light that occurs when an orbiting planet crosses the face of any of them. That, however, doesn’t work with stars the telescope can’t see in the first place.

“You have to design a completely different survey using special instruments and detectors,” said Julien de Wit, an MIT post-doc and a co-author of the paper, in a statement. “It’s a risk.”

The TRAPPIST team took that risk, betting that they might learn something if they studied TRAPPIST-1 in the infrared spectrum rather than the visible. In that wavelength, even a supercool dwarf will light up like a beacon against the deep freeze of interstellar space.

The telescope scrutinized the stars for a total of 254 hours over the course of 62 nights, and while similar studies have shown little going on around other brown dwarfs in the vicinity, TRAPPIST-1 was hopping. Flickers in the infrared signal indicated the existence of at least three planets, all of them about the diameter of Earth, and all of them orbiting the star at a distance at which water—the must-have ingredient for life as we know it—could exist in liquid form.

The two innermost of the three planets complete a single orbit once every 1.5 and 2.4 days, respectively, while the more remote one takes as much as 73 days. That’s a great deal faster than Earth’s 365-day orbit, which means that the planets are a great deal closer to TRAPPIST-1 than our planet is to the sun. Such close proximity to our own hot star would cause Earth to flare up like a match head, but close is where you want to be if you’re trying to be properly warmed by a very cool star.

It’s likely that that same proximity has caused the inner two planets to become tidally locked, keeping the same hemisphere pointed to TRAPPIST-1 all the time. That might make them both too hot on the daytime side and too cold on the nighttime side. At their so-called terminators, however—the dividing line between sun and shadow—conditions might be perfectly, thermally balanced. The third planet has no such limitations on where on its surface life could take hold. It orbits squarely with the not-too-hot, not-too-cold region astronomers have dubbed the Goldilocks zone. If there is liquid water anywhere on its surface, it could flow everywhere.

Spacecraft won’t be visiting TRAPPIST-1 any time soon. Even at just 40 light years, it is far, far beyond the reach of our probes. Now that the existence of the planets is known, however, telescopes around the world can study them in all wavelengths from the ultraviolet to radio, looking for biosignatures of methane, oxygen, CO2 and more in their atmospheres—assuming they have atmospheres—which would further boost the case for life. And all of that is before the James Webb Space Telescope—the follow-on to the Hubble—launches in 2018, bringing the most powerful telescopic eye ever into the game.

“So many people will get to play with this [system],” said de Wit. It’s the kind of play that, very soon, could yield very big results. 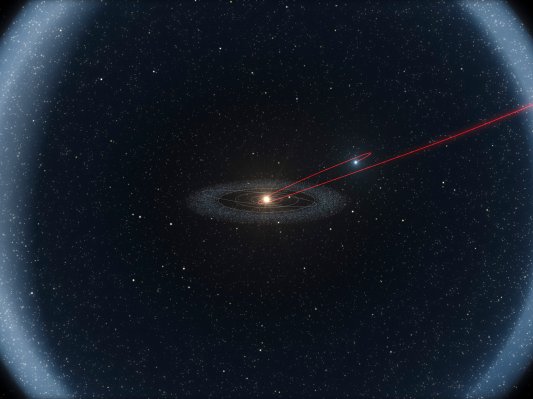 Scientists Found Asteroid from Time of Earth's Formation
Next Up: Editor's Pick