The Link Between Mosquito Spraying and Autism

A new study finds a correlation between the aerial spraying of pesticides to kill mosquitoes and an increased risk of developmental delays and autism among kids.

In the new findings, presented at the Pediatric Academic Societies 2016 meeting, researchers looked at the rates of autism and developmental delays from eight zip codes in a region of New York that is exposed to yearly airplane pesticide spraying to prevent mosquito-borne disease like eastern equine encephalitis virus. They compared those to the rates in 16 zip codes where the pesticide spraying doesn’t happen. (Other forms of pesticide spraying could still occur, like manual spreading.) They controlled for factors like poverty and gender variation across the zip codes.

The authors report that kids living in zip codes where the spraying was done each summer had around a 25% higher risk of an autism diagnosis or developmental problem compared to kids living in areas without the aerial spraying. “Several studies have previously reported links between pesticide and autism risk,” says Dr. Steve Hicks, an assistant professor of pediatrics at Penn State College of Medicine in an email to TIME. “Our data suggests the way in which pesticides are applied might play some role. Studies of pesticides in animal models show they can affect certain neurotransmitters in the brain, but their exact molecular effects on brain development are still being explored.”

The study only shows a correlation between the two and does not show that aerial pesticide spraying causes autism. It also does not provide information about whether a child could have been exposed during pregnancy or after birth. Aerial spraying is a common mosquito control tool, and states in the U.S. are ramping up efforts to control mosquito populations amid the ongoing Zika outbreak. The study authors state that the findings are not strong enough to change mosquito control practices.

“Cities and states should not stop spraying based on this data alone,” says Hicks. “This study needs to be replicated in other regions of the country that use similar spraying methods.”

“In the meantime,” he adds, “communities should continue to warn residents to stay indoors, cover gardens and cover children’s play equipment during periods of spraying, which most already do. It would be important to know what percentage of residents are actually receiving and following these recommendations from their local department of health.” 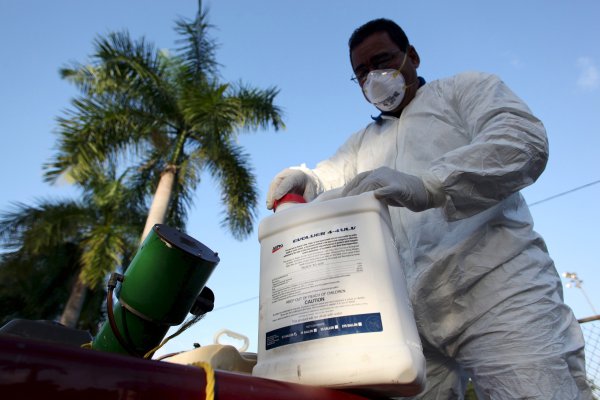 U.S. Reports First Death From Zika
Next Up: Editor's Pick