How a Lack of Representation Is Hurting Photojournalism

In a recent World Press Photo report, 1,556 photographers were surveyed on the state of news photography. Beyond the issues around image manipulation and objectivity that have gripped our industry in recent years, the results put the accent on a more concerning issue: that of representation. Nearly 65% of respondents originated from Europe and North America, and only 15% were women. More disconcerting was the lack of comprehensive figures reflecting the crippling under-representation along socio-economic, racial and sexual orientation factors.

The value of a photograph goes beyond the magazine, newspaper or web page it is placed in. It’s part of the editorial content we collectively generate, not only as a piece of journalism but also as a historical record. As contributors to this visual diary, we must consider what stories we are telling. Dare we leave the bulk of the narrative to the predominately white middle-class heterosexual man from the world’s richest countries?

“Everyone thinks it is someone else’s problem, or that the problem will correct itself, or if you talk about it, the numbers will somehow magically change,” says Alana Barton of the International Women’s Media Foundation. “But solutions are not impossible to identify. We have to decide that diversity is valuable enough for us to address the root causes and find the collective will to treat the problem.”

“In 100 years people are going to look back at what we did,” adds Palestinian photographer Laura Boushnak. “Imagine it from just that one perspective. That is so dangerous.”

There are many equality shortfalls to be aware of – from a lack of gender and racial representation to a dearth of social and cultural range. Put together, these inequalities can create a single homogenous narrative that can lend too much weight on a small part of the larger story—war, poverty and disease in Africa, for instance, says Lagos Photofestival director Azu Nwagbogu. He believes that the way Africa is represented internationally is caused by a lack of diversity in photojournalists, and that the damage these representations cause are far reaching. “African photographers also tell these stories because they think it’s what the West wants to see,” he says. “They instinctively begin to follow these canons because they think this is what will get published.”

That doesn’t necessarily mean that we should altogether bypass foreign photographers in favor of local ones. In a globalized world, achieving diversity will enable more cross-pollination so that we get both foreign and the domestic perspectives on stories. Countries like the U.S. must also be documented from an outsider perspective, as director of Photography at National Geographic, Sarah Leen, explains. “We need photographers from the rest of the world to come here and photograph the U.S. Without cross-pollination, Robert Frank would never have photographed ‘The Americans,’” she says. “We need that fresh look at another culture by photographers who bring no baggage to the story, but we also need people photographing their own backyard, who speak the language and understand the customs.”

The same can be said for all disparities. “At first my interest in LGBT rights was a moral and intellectual interest but then I witnessed a violent attack on a gay person and that incident made it personal to me,” says Mads Nissen, whose work on homophobia in Russia won the 2015 World Press Photo award. After he received the prize, Nissen, who is heterosexual, was repeatedly asked about his sexual orientation. He argues that there’s a need for various views, including for LGBT photographers to document heterosexual and vice-versa.

But how did we get to this point? When you look at the makeup of the leading news organizations in America, a meager 12% of them have either a woman or a person of color in one of its top three positions, as shown in the 2015 American Society of News Editors census. No diversity at the top leads to no diversity at the bottom, says Debra Adams Simmons, the vice president of news development at media organization Advance Local. “The industry as a whole has to renew its commitment to ensure that we have a broad base of people telling the American story, and leadership is one way to influence who we have telling those stories”

Khouloud, an engineering student, shouts slogans May 2013, during the weekly demonstration in front of the Ministry of Interior asking for progress in the investigation of the assassination of Chokri Belaid. opposition leader Chokri Belaid, was killed by a gunman in Feb. 2013.
Laura Boushnak

Change usually takes time. So, it’s the responsibility of the gatekeepers of photojournalism—from media companies to picture editors and agency owners—to commit to addressing this imbalance with top-down leadership. “You want to find the best person for the job,” says Leen. “But we need to look more carefully for diversity in this decision-making process.”

The film board of Canada recently addressed the gender imbalance in their industry by committing 50% of their budget to women directors. This will be implemented in a transparent way over the next three years, it says. Would something similar help to secure commitments from the people in power?

Barton thinks so. “The word ‘quota’ makes some people break out into hives as it can seem unfair when you talk about it abstractly,” she says. “But in a situation like this, it could encourage news organizations to think about the reasons why they are hiring less women candidates. It would also make them think about their processes. If you instituted them in the short term, it would get organizations to a place where they don’t have to institute quotas because their processes are more fair and encourage diversity.”

While quality of work should precede hiring or assignment decisions, diversity considerations would bring change. “Who is he or she, where did this person come from, what varying perspectives might help amplify a voice not already heard?” says Barton. “These are the kind of things that can be at the forefront of a person’s mind, rather than an after thought, when these considerations become part of a standardized process.”

But the responsibility doesn’t reside just with these gatekeepers: We are all accountable for the lack of diversity in photojournalism, and photographers should also take action. Media artist Kyle McDonald, for example, sends a diversity rider to all potential collaborators. It reads:

There’s also a need to address the economic barriers that can prevent photographers from majority-world countries or low-income backgrounds from getting the recognition they deserve. For example, some have no access to photography schools, while others struggle to finance self-initiated work to fill an early-career portfolio. Language can also be a major stumbling block in an industry where English is the common language – in China, a series of workshops were launched to help Chinese photographers enter World Press Photo, for example.

Read next: How a Chinese Organization Is Helping Photographers Win Awards

For those below the poverty line, photojournalism often isn’t even considered a career option, as Paul Moakley, TIME’s deputy director of photography, points out. The son of a fisherman and construction worker, Moakley says he wanted to be realistic when he was growing up. “Photography was just not something that anyone in my family did and no one understood how to make a living off of it,” he says. “I never considered it as a career until I was in college. It wasn’t until my second year that I realized that I could do an internship and that I could be around people who really do these things for a living, and that was a breakthrough for me. I was fortunate to find a path through it.”

Moakley, now a photo editor, educator and adjunct for six years at the School of Visual Arts, still sees many struggle to make it to the top among tough competition. “Many people I encounter from non-Ivy League schools are stifled by not having a path to break through,” he says. “It is very elitist in a sense, and we have to be careful about that as editors, as curators and as photographers.”

For editors like Moakley, social media has been a game changer, giving him access to photographers halfway across the world from his desk in downtown New York,. “It’s made it more difficult to excuse the lack of diversity in photography,” he says. “There is no excuse when you can search for people specifically in geographical areas.”

Leen agrees. “There is so much extraordinary talent out there that we don’t know about. Social media gives us an opportunity to get to know photographers in diverse geographical regions.”

Democratic access to photographic education is clearly a key to correcting the diversity imbalance in photojournalism. For Boushnak, who grew up in Kuwait and studied photography through correspondence with a school in the U.S. (posting prints and receiving feedback on tape recordings), bringing education to regions with no access is key to solving that inequality problem. Her collective RAWIYA has teamed up with World Press Photo to run a workshop in Gaza for local photographers that can’t travel outside of the strip.

Grass roots programs like this one provide invaluable resources and photographic workshops that play a vital role in helping to kick-start the careers of photojournalists in the majority-world.

We are just now beginning to realize the broader implications of photography’s democratization for the future of photojournalism. As devices like virtual reality and computational photography incite a rethinking of photography, now is the time to accommodate the outnumbered.

“Photography is less and less about technical skills or craft work, and more about personal vision,” says Nissen. “I see it more and more. You love a body of work and you look into it and get to know the photographer behind it and you realize of course, only that person with that background could have done it. This is where I get optimistic, because with the democratization of photography, what will make your career, what will make you stand out is really your unique voice and your unique vision.”

Anastasia Taylor-Lind is a photojournalist and artist currently undertaking a Nieman Fellowship at Harvard. She attended a World Press Photo workshop for young photographers in Vietnam in 2004 and was a participant in the organization’s Joop Swart Masterclass in 2011. She was a judge on the People jury for this year’s World Press Photo. 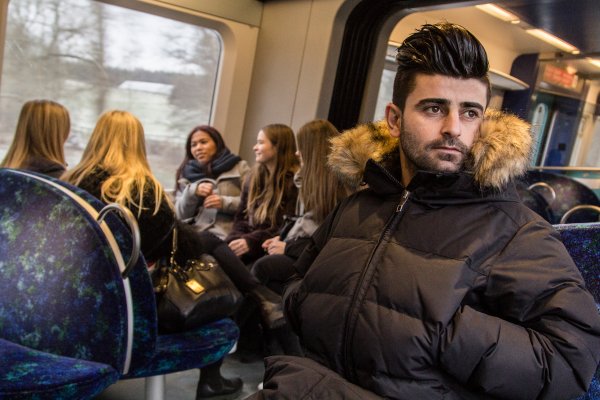 One Refugee's Life in Diplomatic Limbo
Next Up: Editor's Pick