China Campaigns Against 'Western Values,' but Does Beijing Really Think They're That Bad?

A Chinese flag is put up on Sept. 30, 2007, in Shanghai by a McDonald's sign for a celebration of China's National Day on Oct. 1
Lucas Schifres—Getty Images
By Hannah Beech / Shanghai

A Japanese child exemplifies honesty. A Russian one acts as a great friend. These character lessons, in a textbook produced by China’s official academic publisher, have catalyzed an online controversy about whether state schoolbooks glorify foreigners at the expense of locals. An article on a news portal criticized the elementary-school textbook, published by People’s Education Press, for featuring positive foreign characters while appearing to denigrate Chinese ones. But a defense of the textbooks appeared in the Global Times, a Chinese Communist Party–linked newspaper, on April 29: “Such accusations are a reflection of narrow-minded nationalist sentiment and a lack of cultural confidence.”

Chinese textbooks aren’t exactly known for their objectivity. Many nations use textbooks to glorify national myths and circumvent embarrassing historical episodes. But the omissions in Chinese textbooks are particularly striking. While atrocities committed by invading Japanese troops during World War II are amply covered, the Chinese Communist Party’s own excesses, such as the famine that followed the Great Leap Forward, or the 1989 massacre of student protesters around Tiananmen Square, receive little or no mention. On its website, the People’s Education Press stresses that it “adheres to the tenets of the CPC,” or Communist Party of China, and aims “to contribute to the construction of a harmonious socialist society.”

In recent months, Chinese education officials have intensified a campaign against so-called Western values, which they say have infiltrated local campuses. Last year, the nation’s Education Minister Yuan Guiren, a former president of Beijing Normal University, told a conference of college academics that they should “by no means allow teaching materials that disseminate Western values in our classrooms.” (The ideology of Karl Marx is, apparently, exempted from the anti-Western drive.) Professors at Chinese universities complain that they are being pressured to remove foreign material from their syllabi. “It’s excessive interference,” says one Beijing history professor, who declined to be named because of the sensitivity of criticizing the party directive. “Just because something is Western doesn’t mean it harms our students.”

The anti-Western campaign comes as an increasing number of Chinese students head overseas for study. Around 300,000 Chinese students have flocked to American schools. Chinese President Xi Jingping’s own daughter attended Harvard University, while many offspring of China’s political elite also study abroad. Still, the antiforeign rhetoric continues back at home. Earlier this month, cartoon posters in Beijing entitled “Dangerous Love” warned Chinese women off dating Western men, lest they turn out to be foreign spies. A video produced by the Chinese Ministry of State Security also portrayed Western comic-book characters, such as the Joker and Wonder Woman, as foreign moles. After just a month’s operation, Apple’s online book and film services were blocked in China earlier last week, a presumed victim of a mounting crackdown on Internet freedom and online publishing.

On April 28, China’s legislature passed a controversial law giving the Ministry of Public Security broad oversight of foreign NGOs starting next year. The assumption girding the law is that some foreign non-profits — which fund everything from poverty alleviation and environmental awareness to health and legal initiatives — may be national security threats. “A minority of foreign NGOs, through the means of funds and some methods, are able to harm China’s national security interests and [undertake] some other illegal criminal activity,” Hao Yunhong, head of the Ministry of Public Security’s foreign-NGO-management office, said at a press conference on Thursday, according to state media. Hundreds of China’s own civil-society activists have been silenced or detained since President Xi took power in late 2012.

But do Chinese leaders — much less the Chinese public — really believe that foreign NGOS or textbooks lauding foreigners damage the nation? “I think [Xi] believes that the West is irretrievably hostile both to the regime and to China’s rise and tries every tricky way to undermine China and the regime,” says Andrew Nathan, an expert in Chinese politics at Columbia University in New York City. “As far as other slogans and the idea that Xi has a ‘thought’ of his own, I would not expect he believes it any more than the admen in Mad Men believed what they wrote.” 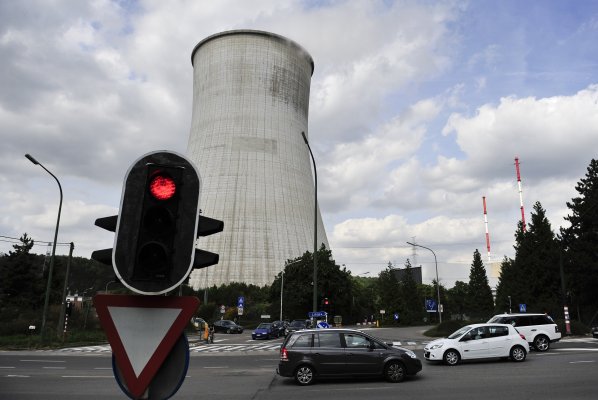 All Belgians to Get Iodine Pill In Case of Nuclear Disaster
Next Up: Editor's Pick