Two guns sat on a table at Baltimore Police Headquarters Thursday. One was fake, the other real. Police Commissioner Kevin Davis suggested that members of the press figure out which was which.

“Which one’s the replica and which one’s the firearm I think is indicative of the tough, tough job, the tough profession we have out here,” Davis said Thursday.

A day before, two Baltimore police officers shot Dedric Colvin, a teenager who police say refused to drop a BB gun that officers believed was the real thing. Colvin was shot once in the shoulder and once in the leg, injuries that have been described as not life-threatening.

The shooting focused attention on guns that are often perceived to be real firearms but turn out to be toy, BB, or air guns, and in the last few years, several incidents have occurred in which boys and young men were shot carrying fake guns. In 2012, police in Texas shot an eighth-grader who was carrying a pellet gun that appeared to be a Glock. A year later, 13-year-old Andy Lopez was fatally shot after officers mistook his airsoft gun for an AK-47.

The incident that caught the country’s attention occurred in 2014 in Cleveland when officers approached 12-year-old Tamir Rice, who was carrying an airsoft rifle, which is a replica of an air gun and shoots non-lethal plastic projectiles. Officers fatally shot Rice. No one was charged in the incident, but this week the city settled with Rice’s family for $6 million.

Rice’s rifle lacked an orange safety tip at the end of the barrel, a federal regulation put in place in 1989 to help officers discern when a gun is fake, but which can be removed or tampered with after the gun is sold. And there are no such federal regulations for BB guns, many of which look strikingly similar to the real thing.

Baltimore police say the gun carried by Colvin was a Daisy Powerline 340 BB gun that sells for $24.99 on Daisy’s website and even less on Amazon. It’s one of several Daisy guns that appear similar to actual handguns. Officers said the gun is not sold in toy stores but can be found in hunting and sport shooting sections in sporting goods stores.

Joe Murfin, a spokesperson for Daisy, says the company intentionally makes its guns appear like the real thing, rather than like toys, because even BB guns can cause serious injury.

“People want an air gun to function like and look like a firearm,” Murfin says, adding that Daisy’s guns have a series of disclaimers warning consumers about careless use of the products or using them out in public.

The issue of replica guns is one faced by police departments across the country. At the Arlington Police Department in Texas, Lt. Chris Cook says officers are not trained to try to distinguish between real and fake firearms, but instead assume all guns are potentially dangerous.

“It would be unrealistic to try to instruct an officer to make a split-second decision that this is a real gun or a fake gun,” he says. “From our perspective, we think there’s no reason to manufacture these fake guns. We don’t see a legitimate need to manufacture something that resembles a real gun.”

Arlington police say they’ve seen an increase in the number of replica guns used in crimes recently because they’re often cheap and easy to find, and Arlington Police Chief Will Johnson is calling for legislation to address the problem.

“There has to be more realistic training with fake and real handguns under all sorts of conditions that simulate what officers are going to be experiencing in the field,” Shane says. But he adds that it’s also up to people who own the guns to use them responsibly.

“It’s not the gun manufacturer’s fault per se,” Shane says. “It’s more how individuals are taught to handle the gun.”

Some states have implemented local restrictions on replica guns that go beyond federal requirements. In 2014, California passed the Imitation Firearm Safety Act, which mandates that the exteriors of BB and airsoft guns be painted a bright color or include florescent strips so they’re distinguishable from real firearms. In New York, the state’s attorney general reached an agreement with Walmart, Sears and Amazon that they would no longer sell guns in the state that resembled real firearms. According to the National Conference of State Legislatures, 12 states, along with Puerto Rico and Washington, D.C., prohibit residents from possessing imitation firearms.

In most of the country, though, guns like the one Dedric Colvin was holding are perfectly legal—if not perfectly safe. 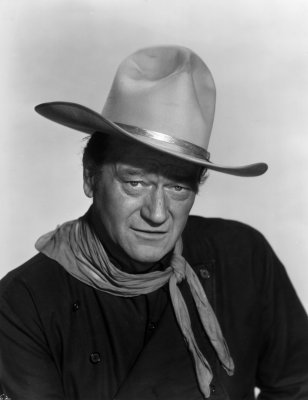 California Rejects 'John Wayne Day' Because of Actor's Comments on Race
Next Up: Editor's Pick