Many of the most notable public policy initiatives to address climate change—from President Obama’s Clean Power Plan to China’s plans to curb new coal-fired power plant—focus on switching the power sources that provide people with electricity.

But as policymakers craft regulations to combat global warming, they are increasingly saying that using different sources of energy can only go so far. Reducing unnecessary energy consumption in buildings—and the carbon dioxide emissions that accompany it—ranks near the top of the list of newfound policy goals.

The math is simple for many cities and regions with strong goals of reducing greenhouse gas emissions. Buildings currently account for close to 40% of energy consumption in the U.S. and are often remarkably inefficient.

In Los Angeles, for instance, the Department of Water and Power spends $150 million annually promoting energy efficiency to its customers. One initiative in that city puts connects utility workers with commercial customers to recommend solutions to make their customers facilities more efficient. The utility hopes that focusing on energy efficiency will allow them to meet goals for greenhouse gas emission reduction while avoiding the need to build large new power plants.

Read More: Why Cities Are the Next Frontier in the Fight Against Climate Change

“We can’t be passive, we need to be very active,” says David Jacot, director of energy efficiency at LA Department of Water and Power. “We’re working hard to mine as much energy efficiency opportunities in our customers’ building portfolios as we can.”

Methods to reduce energy consumption in buildings can take many forms, from the mundane to the state of the art. A recent report from a commission in New York City tasked with planning for a low-carbon future in the city recommended a slew of policies to reduce energy use for heating, cooling and lighting, among other things. The city’s plan includes a requirement that companies to repair and improve faulty heating distribution systems, a measure to encourage updates to exterior lighting, requirements for overing retail refrigerators and improved ventilation systems. And that’s just a start. In total, the measures to reduce greenhouse gas emissions will result in a reduction of 2.7 million metric tons by 2050, the equivalent of taking 560,000 cars off the road, according to a press release.

Read More: Cities Are the Front Lines for Action on Climate Change

“New York City is doing its homework,” says Jeffrey D. Sachs, director of the Earth Institute at Columbia University. “And the entire world is the beneficiary.” 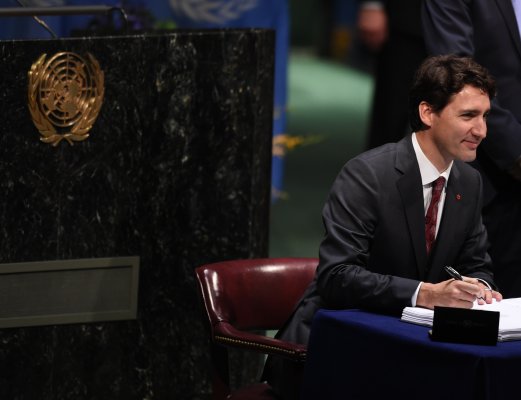 More Than 170 Countries Expected to Sign Paris Agreement on Climate Change
Next Up: Editor's Pick