Bernie Sanders Looks to Promote His Ideas at Democratic Convention

Bernie Sanders speaks during a rally in Springfield, Ore., on April 28, 2016.
Ryan Kang—AP
By Sam Frizell

Bernie Sanders is losing the primary battle, but he’s still waging a war for the soul of the Democratic Party.

Now all-but eliminated from winning the Democratic nomination, the Vermont Senator and his advisers are drawing up plans for a fight over the party’s platform and rules at the July convention, hoping to inscribe his ideas into the party’s DNA.

That could mean putting into the text ideas that Clinton and her allies have resisted, such as raising the federal minimum wage to $15 an hour or changing the primary rules to eliminate superdelegates, Sanders allies say. His advisers are considering tactics that would take advantage of the party’s arcane rules to push proposals through the party-controlled committees, perhaps as far the convention floor.

The looming fight at the convention has become a key motive for Sanders to continue contesting major primary states. “If we don’t win, we intend to win every delegates we can,” he said at a rally on Wednesday, “so that when we go to Philadelphia, we will have the votes to put together the strongest progressive agenda that any party has ever seen.”

But Sanders will face some of the same challenges in his platform fight that he faced in his campaign, with much of the agenda on the convention floor controlled by Clinton and her allies within the party. He has lost a string of devastating losses in Pennsylvania, Maryland, New York and other delegate-rich states in recent days, which means he will have fewer supporters compared with Clinton in the convention halls.

Rep. Debbie Wasserman Schultz, the chair of the Democratic National Committee, has already appointed the leaders of the three committees Sanders hopes to influence. Co-chairing the Rules Committee is former Rep. Barney Frank, a vocal Clinton ally who has repeatedly criticized Sanders for having few accomplishments in Congress. A co-chair for the Platform Committee is Connecticut Gov. Dan Malloy, a close Clinton ally who has harshly targeted Sanders’ gun control stance.

Moreover, it is unclear Clinton herself is willing to compromise with Sanders if he does make stringent demands. “I am winning. And I’m winning because of what I stand for and what I’ve done and what I stand for,” Clinton said on Monday, indicating her resistance to shifting her platform.

Clinton added that in the 2008 elections, she supported then-Sen. Barack Obama without preconditions, despite being closer in popular vote to him than Sanders is to her today. “We got to the end in June and I did not put down conditions. I didn’t say, ‘You know what, if Senator Obama does x, y and z, maybe I’ll support him,’” she said.

Sanders and his advisers have not yet settled on issues they wish to advance at the convention. On Monday, Sanders said that Clinton would need to adopt single-payer healthcare and a more comprehensive climate change plan if she wants to win over his supporters. His allies are adamant that he get a strong hearing at the convention and say on the platform, which could lead to a contentious fight in Philadelphia.

“This resurgence of the progressive wing of the party has been a good thing and it demands its day in the sun at the convention,” said Rep. Raúl Grijalva, a Sanders backer, in an interview. “The platform has to be more reflective of the issues [Sanders] has put up front.”

The rules to the convention are complex, and Sanders’ and his advisors, who spoke on the condition of anonymity, have not settled on the best method to help set the party’s platform. But even if Sanders enters the convention with between 1,500 and 1,900 delegates—well under the number of delegates he would need to win the nomination—he will have a strong base of grassroots organizers committed to his ideas.

“These are people that very much believe in Bernie Sanders’ agenda. They’re going to care about this a lot,” a Sanders aide said. “I don’t think the DNC or the Clinton campaign have wrapped their mind around that.”

Though the leadership of the party’s three key committees generally favors Clinton, Sanders could have significant leverage over the convention.

Each party committee has 187 members. Twenty-five are appointed by the DNC chair, and the other 162 are apportioned according to each candidate’s support in state primaries and caucuses. If Sanders wins 40% of the total delegates in all primaries, he will have roughly the same representation among the 162 members on the committees who are not appointed by the DNC chair. Those delegates will largely be hand-picked Sanders loyalists.

According to party rules, Sanders only needs support from 20% of each committee to propose amendments that could make it to the floor of the open convention—which could in turn spur a contentious, public fight in primetime.

If Sanders’ backers in the platform committee push for a $15 minimum wage, for example, and Clinton’s supporters oppose it, the Sanders camp could issue a “minority report” with 25% support and bring the debate to the convention floor. That would force Clinton supporters to decide whether to vote against a measure popular with the Democratic base.

One change the Sanders campaign has long eyed is making the Democratic primaries open to voting by independents. “One of the things that we will be fighting for on the platform, whether he’s the candidate or not, is electoral reform,” said Jane Sanders, Bernie’s wife, in an interview with CNN this week. “The process needs to change. We need an open electoral system, same-day registration and open primaries.”

Still, Clinton’s broad support in the party is in institutional hurdle against any attempt by Sanders to control the proceedings. The 25 most-senior members on each committee have already been chosen by Wasserman Schultz. On the Platform Committee, for example, at least 16 of the 25 members appointed by the party are known Clinton allies.

Much of the party’s infrastructure is made up of stalwarts who came up during President Bill Clinton’s tenure and have longstanding connections with the family. Others endorsed Clinton early in the race.

“Because the Party’s platform is a statement of our values, the DNC is committed to an open, inclusive and representative process,” said Luis Miranda, communications director at the Democratic National Committee. “[J]ust as we did in 2008 and 2012, the public will have opportunities to participate.”

Sanders’ campaign has not decided how it will approach the convention. It may heed a call to party unity and ensure any negotiations are careful and contained within the committees. Or it may take a more ambitious approach.

In the divisive 1980 Democratic convention, losing candidate and then-Senator Ted Kennedy battled with President Jimmy Carter over major platform points, bringing amendments to the convention floor in a show of defiance. Kennedy was able to help push the Equal Rights Amendment into the party’s platform. At the end of the convention, Carter was ungracefully forced to follow his rival around the stage to seek a reconciliatory victory gesture.

Recent Democratic conventions have been tamer affairs. Clinton in 2008 conceded the nomination to Obama and did not seek an open fight on ideological issues, letting the nominee set the agenda.

Sanders has already defined much of the conversation in this race. Clinton has moved toward Sanders’ position against the Keystone Pipeline and the Trans-Pacific Partnership, and borrowed much of his rhetoric on income inequality and other issues.

Clinton campaign aides are hopeful that the party will come together in July despite Sanders’ language. Jane Sanders said on Tuesday that the campaign “will not play the role of spoiler” and Sanders himself has said he will do everything he can to prevent a Republican from being elected.

“In the end, we have every confidence that our party will be able to come together,” Clinton press secretary Brian Fallon said. “At this point in time, when the primary is still eight weeks left to be contested, I think there’s still plenty of time for Sen Sanders to make a decision as to how he would conduct himself, and what he would ask his supporters come this summer.” 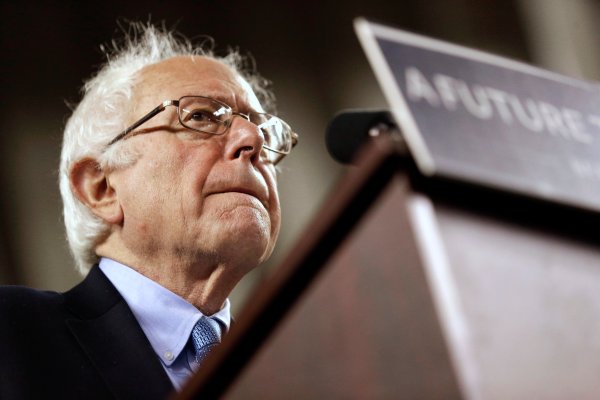 The Problem With Bernie Sanders' Polling Argument
Next Up: Editor's Pick