Matt McGorry on Why Male Feminism Is So Important

Matt McGorry has a message for all the other nice guys out there: “Being nice is not enough to stop sexism or racism or any kind of -ism.”

You might know McGorry from his roles in Orange Is the New Black and How to Get Away With Murder, or from his viral Instagram post in support of the #FreeTheNipple campaign, or from his Twitter spat with Piers Morgan in defense of Beyoncé. If dude feminists formed a lacrosse team, he’d be the captain.

McGorry was sitting in the conference room of the Ms. Foundation headquarters, just a few hours before the organization’s annual Gloria Awards honoring feminists on Wednesday. He was chatting with Ms. Foundation president Teresa Younger and former football player Wade Davis, who came out nine years after he left the NFL, about male feminism and the Ms. Foundation’s #MyFeminismIs campaign to broaden the definition of feminism.

“I actually don’t like to call myself an ally,” Davis said. “It’s almost like this title, being an ally is like, ‘Yeah, I’m here, too, we need a title also.’ No, we should just do the work.”

Younger said guys like Davis and McGorry are crucial to the work of the Ms. Foundation, which she described as promoting “equality of all genders.” She said she wants to expand the feminism tent, so that nobody feels like feminism is only for people who “have read the right books, know the right terminology.” Ambassadors like Davis and McGorry, she said, can help educate men who are coming from the right place but don’t quite get it yet.

For McGorry, that means educating other men about how to actively fight sexism, not just stand back and refrain from making sexist comments. “The people that I’m trying to talk to are the other men out there who are good guys,” he said. “If you’re in high school and watching a bully beat someone up, it’s not going to help if you stand there saying, ‘I support you.’ You have to be willing to take a few punches.”

McGorry has taken a few punches himself. Some feminists object to the whole idea of male feminism — or at least the excessive celebration of men who are carrying the feminist torch that women have been carrying this whole time. McGorry gets that, and he said he’s bothered by the backlash, but it’s not going to make him stop.

Davis said men have a unique opportunity — and therefore a unique responsibility — to educate other men about what they can do to support feminism. He said sometimes his friends will float out thoughts about gender equality, just to see if he’ll set them straight. “Men will go to barbershops sometimes to see what other men are thinking,” he said, adding that he sees all-male spaces as the perfect place to talk about feminism.

Being a male feminist means actively promoting feminism among men and answering questions from other well-meaning guys so that women don’t have to — and that’s McGorry’s favorite part. “I tweeted: ‘When you’re used to privilege, equality feels like oppression,’ and one of my friends I was like, ‘Can you give me an example of that?’” he said, punching his fist in the air. “And I’m like F-ck yea! Ask me again! Got ’em!” 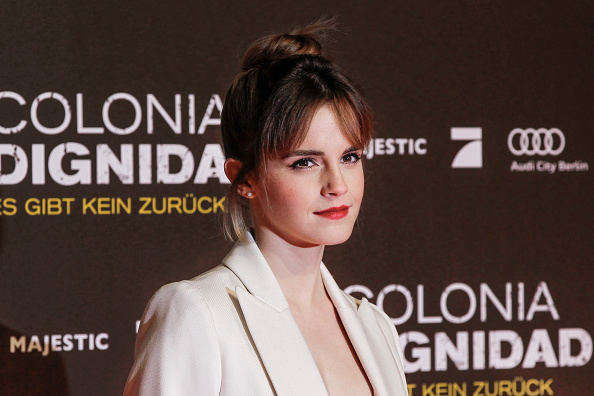 Emma Watson and Geena Davis Are on a Mission to Fix Hollywood's Gender Problem
Next Up: Editor's Pick