The father of Scientology leader David Miscavige has written a book about his son provocatively titled Ruthless: Scientology, My Son David Miscavige, and Me – and David Miscavige has threatened to sue over the book, which its U.K. publisher says details the younger Miscavige’s “brutal approach to running the organization.” In the first excerpts from an interview Ron Miscavige did with ABC, he talks about his estranged son’s childhood and says he “wasn’t always that way.”

“When he was a kid, I am telling you, he was a lovable kid,” Ron Miscavige, who introduced David and other family members to Scientology in the ’60s, tells ABC’s 20/20 in an interview airing this Friday in advance of the memoir, due out May 3.

According to the publisher’s description of the book, the elder Miscavige opens up about his son’s rise to prominence within the controversial church, which counts celebrities including Tom Cruise, John Travolta and Kirstie Alley among its members. As a young man, Miscavige worked directly with Scientology founder L. Ron Hubbard, and eventually assumed control of the church following Hubbard’s death in 1986.

Ron, who admits his son grew up in a dysfunctional household, says David began getting into fistfights in the first grade and grappled with severe asthma attacks.

“He enjoyed having a fight,” he says. “And I’m sure he instigated it … He’s a tough kid. I mean, for his size, he’s like a stick of dynamite.” Ron also said that young David had a tendency to complain about other people: “He would come home and start complaining about somebody and I would say, ‘Hey, come on, you’re like Little Bad News, what the hell is this?’ … and then he would knock it off.”

But Ron Miscavige tells 20/20 he remembers seeing a profound change in David when the boy completed his first “auditing” session – a kind of Scientology counseling session – in 1969 at just 9 years old.

“After 45 minutes, David walks out, smiling, bright,” he says. “[That moment] decided his life, and mine.”

“Of course, that’s what the auditing handled, the actual psychological phenomena of it,” he says.

“I think it was at that moment that he decided he’s going to do something with this,” he adds.

Ron Miscavige says he first heard about Scientology at a business meeting in 1968. He said the entire family eventually began studying L. Ron Hubbard’s teachings, and David became particularly devout in his teens. With his family’s blessing, David left home at 16 to join “Sea Organization” or “Sea Org,” a group featuring Scientology’s most dedicated members.

“He advanced very rapidly in the Church,” Ron Miscavige tells 20/20. “He really decided at a very young age to make it his career and his mission.”

David Miscavige rose quickly within the church, and in 2006 even served as best man in Tom Cruise‘s marriage to Katie Holmes. However, he has been the subject of criticism over the years by ex-members including Leah Remini, who released her own memoir last year about her bumpy exit from the church.

According to ABC, Ron Miscavige also admits in the interview that he hit his then-wife and children. “There was some domestic abuse, which I don’t feel good about,” he says. But he denied a statement that his daughters, Denise and Lori, released to ABC through their attorney, alleging that “our father beat our mother senseless in drunken tirades, averaging two violent attacks with his fists per week.” Ron Miscavige called that claim “a flat-out lie.”

Although David Miscavige has not commented on the book directly, Monique Yingling, an attorney representing the church, spoke to 20/20 and called Ron Miscavige’s book “a literary forgery.”

“On a personal level, I think he [David] is probably very, very sad that his father would do this,” she also said.

“There seems to be no explanation except that his father is trying to make a buck off his name,” she continued. “So I think there’s that level of sadness and I’m sure a sense of betrayal.”

Attorneys working on behalf of the Scientology leader contacted Silvertail Books, which is publishing his father’s memoir in London, threatening to sue if the book is published next month.

“You are now on notice of the highly defamatory content of the subject book,” according the letter, which was first published by noted Scientology reporter Tony Ortega.

“In the event that you proceed … our client will be left with no alternative but to seek the protection of UK/Irish defamation and other laws. Accordingly, even at this late stage, we would urge you to reconsider your decision to proceed … [with] what clearly will be a totally unjustified, premeditated attack on our client’s reputation and character.”

Silvertail Books publisher Humfrey Hunter told The Hollywood Reporter that the book is still expected to be released on schedule.

“My plans for the book haven’t changed at all since I received the letter. Full legal due diligence has been carried out on the manuscript and I am both confident in its integrity and very proud that Silvertail is publishing it. Ron’s story is an important one, and he is a brave man to be telling it.” 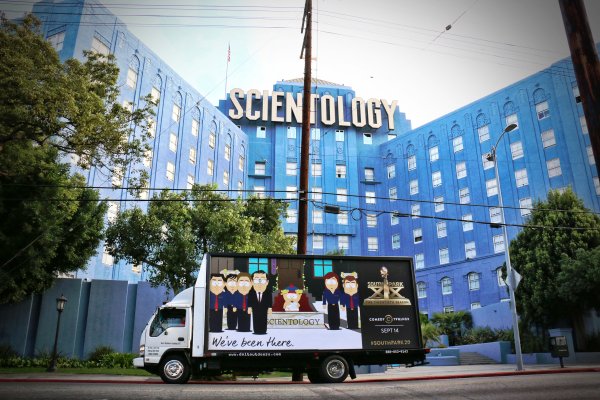