Ted Cruz announced Wednesday that he has chosen former Hewlett-Packard CEO Carly Fiorina to be his running mate should he manage to secure the GOP presidential nomination at the Republican convention this summer.

“After a great deal of consideration and prayer, I have come to the conclusion that if I am nominated to be President of the United States, I will run on a ticket with my vice-presidential nominee, Carly Fiorina,” Cruz announced to a cheering crowd in Indianapolis. “Carly respects the Constitution and the Bill of Rights … She is someone you can be confident in, if the occasion should arise, to be Commander in Chief and keep this country safe.”

Bounding onstage after a lengthy introduction, Fiorina said she was honored and humbled by her selection. She outlined her own personal history and demonstrated the friendship she has formed with Cruz’s family by singing a song to his daughters from the stage. “The character of Ted Cruz has been revealed over time and under pressure,” she said. “He is a fighter.”

The Texas Senator had promised a “major announcement” at an afternoon rally in Indiana, where he is campaigning ahead of the May 3 primary. The Indiana contest, which awards 57 delegates on a winner-take-all basis, is now the linchpin of Cruz’s strategy to stop front-runner Donald Trump from amassing the delegate majority required to clinch the nomination and head off a contested convention.

The move comes at a crucial moment for Cruz, who is hoping to regain momentum after a drubbing Tuesday night in five northeastern and mid-Atlantic states. Announcing Fiorina’s selection now is a way for Cruz — who can no longer win the nomination on the convention’s first ballot — to shake up the campaign narrative on the day after Trump declared himself the presumptive Republican nominee.

The announcement marks the first time since 1976 — the most recent contested GOP convention — that a candidate has indicated their vice-presidential pick before securing the nomination. That move, by Ronald Reagan, backfired when his selection of Senator Richard Schweiker, a moderate, sparked a revolt within his conservative base.

While the timing is unusual, the selection was not a shock. Fiorina, who suspended her own campaign for the Republican nomination in February, endorsed Cruz last month and has emerged as a dogged and effective surrogate. Cruz aides had not disputed a recent report that Fiorina, who has forged an evident bond with the Texas Senator, was being vetted for the role. “She is careful, she is measured, she is serious,” Cruz said Wednesday. “Over and over, she has shattered glass ceilings.”

Fiorina brings several strengths to a Republican prospective ticket. A forceful and disciplined campaigner, the former businesswoman distinguished herself with her withering criticism of likely Democratic nominee Hillary Clinton. Tapping a woman to lead the attacks on Clinton is a way for Cruz to avoid exacerbating his own weak standing with women. A sign of this salience was visible in the tableau the campaign set up for the announcement, with women packed onto the stage as Cruz spoke. The Texas Senator praised the grace and “élan” with which Fiorina had parried Trump’s insults, suggesting that he will rely on her heavily during the remainder of the nominating fight as well.

At the same time, the selection will force Cruz to defend Fiorina’s checkered business record. As chief of Hewlett-Packard, Fiorina presided over the tech giant’s merger with Compaq. When the union soured, the company shed some 30,000 jobs and saw its stock price plummet as Fiorina walked away with an eight-figure golden parachute.

Fiorina’s own presidential campaign ended after disappointing finishes in Iowa and New Hampshire. While she won few votes, she is well-regarded in both the GOP’s mainstream and grassroots wings.

She ran for Senate in California in 2010, losing by 10 points to incumbent Democrat Barbara Boxer. But she won 56% of the GOP primary vote — a feat Cruz is hoping their united efforts can come close to replicating in the state’s crucial June 7 primary.

Cruz acknowledged that the timing of the announcement was “unusual.” But “nobody is getting to 1,237 delegates,” he argued, suggesting the selection would give voters a “clear choice” ahead of a contested convention where he hopes to beat Trump. 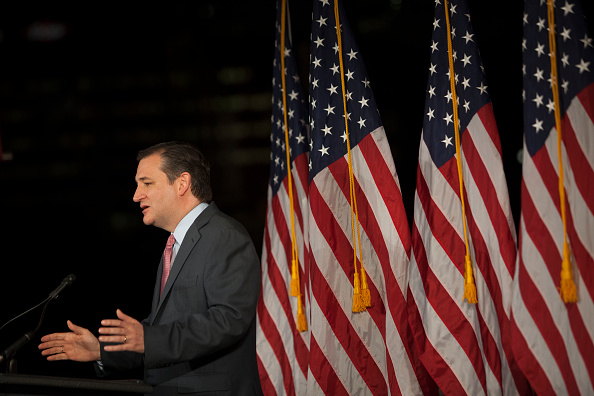