5 Things to Know About Carly Fiorina

Republican presidential candidate Ted Cruz will announce on Wednesday that former candidate Carly Fiorina will be his running mate if he receives the party’s nomination, following weeks of the former Hewlett-Packard CEO campaigning for the Texas Senator.

Here are five things to know about Fiorina.

She has long been considered a contender for vice president

From the start of her campaign, Fiorina’s presidential candidacy fueled speculation that she would become the vice presidential nominee on the eventual Republican ticket. On the day she announced her candidacy in May 2015, Katie Couric asked Fiorina if she was running for vice president. “Oh Katie, would you ask a male candidate that question?” Fiorina replied. In the months that followed, Fiorina emphasized that she was vying to be commander in chief and said the VP question was repeatedly directed at her because she was a female candidate. “It would be different, Sean, if all of the other candidates were asked that same question with the same regularity, but they’re not,” she said in September in a Fox News interview with Sean Hannity. “I’m the person who’s asked that question over and over again, and so one can only conclude that I am getting asked that question because I am a woman.” But others continued to predict she’d find a place on the ticket. “I would be surprised if [Fiorina] were not selected to be the VP in a campaign where Hillary Clinton is the nominee,” Missouri Democratic Sen. Claire McCaskill said at an event hosted by TIME in September.

Fiorina was the CEO of Hewlett-Packard

She led the technology company from 1999 to 2005, when she was fired by the board amid skepticism about the merger she championed between HP and Compaq and concerns about her management style. Fiorina emphasized her business experience during her run for president, but her tenure as CEO was marked by challenges, as Hewlett-Packard struggled through the bust of the tech boom and tens of thousands of people at the company lost their jobs. Criticism about her leadership of the company made her a controversial figure as she launched her campaign, and some have noted that HP’s stock fell significantly during her tenure, performing roughly twice as poorly as the tech-heavy NASDAQ index. HP’s earnings vastly improved once she left the company, and Fortune’s Stephen Gandel says Fiorina might deserve some credit for that success.

She has never held elected office

Fiorina’s background is in business, and she has never before held elected office. She ran for U.S. Senate in California in 2010 but lost to Democratic incumbent Barbara Boxer in a landslide. She served as an adviser to 2012 Republican nominee Mitt Romney and campaigned for 2008 Republican nominee John McCain. When she launched her campaign for president last year, she said her priorities would be to better implement technology in the federal government and to improve the budgeting process at the federal level. She also released a book at the start of her campaign, Rising to the Challenge, in which she detailed the challenges of facing breast cancer and coping with the loss of her stepdaughter.

Fiorina has been campaigning for Cruz

After dropping out of the presidential race, Fiorina endorsed Cruz in early March, calling him “the only guy to beat Donald Trump.” Since then, she has been campaigned for the Texas Senator across the country, praising him as “fearless fighter and reformer” and touting his tendency to “ruffle feathers” and “make enemies” in Washington D.C.

She has been a vocal opponent of Democratic frontrunner Hillary Clinton

Many who had speculated that Fiorina would make a good Republican running mate thought she would help the GOP win over more women voters, especially in the event of a historic general election involving Clinton as the Democratic nominee. In debates and stump speeches during her primary campaign, Fiorina directly targeted Clinton for her policy positions and political background, adopting a favorite one-liner that Clinton is “more qualified for the big house” than the White House. “The Clinton way—say whatever you have to say, do whatever you have to say, lie as long as you can get away with it,” Fiorina said at a debate in January. “Hillary Clinton cannot be the president of these United States.” 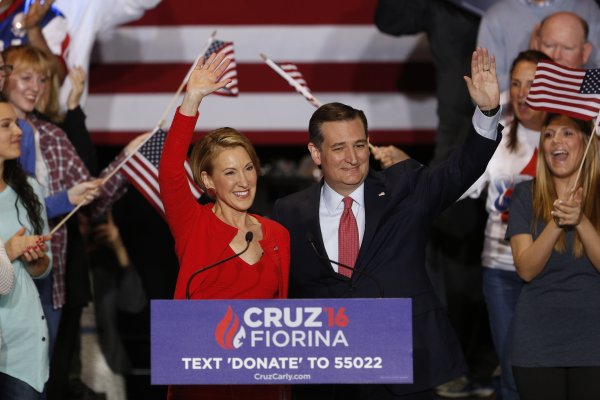