One in Five GOP Primary Ads Have Attacked Donald Trump

About 60,000 TV ads — roughly one-fifth of all ads aired in the Republican presidential primary — have been critical of Donald Trump in some fashion, according to a Center for Public Integrity review of data from Kantar Media/CMAG.

Despite the outpouring of hostility from his opponents, the bombastic billionaire businessman continues to roll toward the GOP presidential nomination, having swept five more states on Tuesday.

“I’ve had negative ads all throughout, and I’ve won races in a landslide,” Trump said in his victory speech Tuesday night. “Most of these people who have been fighting me are gone.”

This massive figure includes about 800 TV ads so far aired in Indiana, a state that holds its primary Tuesday and has emerged as the next major battleground between Trump and Sen. Ted Cruz of Texas, Trump’s chief adversary.

The bulk of these ads aired after Trump already solidified his front-runner status. Now, Trump continues to surge. To date, he’s earned more than 950 delegates, according to the Associated Press. That’s less than 300 short of the 1,237 he needs to clinch the GOP nomination — and avoid a contested Republican National Convention in July.

“We are convinced that Trump can be stopped short of 1,237,” Club for Growth spokesman Doug Sachtleben told the Center for Public Integrity.

Sachtleben said the conservative organization, which was the first group to start airing attack ads against Trump last fall, will be targeting Indiana, where polls show a close race. The group is also eyeing delegate-rich California, which holds its primary on June 7.

California, Sachtleben added, “is ultimately where we believe this race will come down to.”

To date, the Club for Growth has spent more than $9.7 million attacking Trump, according to federal campaign finance filings. Both its super PAC and 501(c)(4) “social welfare” nonprofit arm have participated in the barrage.

In addition to the Club for Growth, a host of other conservative groups have joined the anti-Trump chorus. Some of these organizations have spent millions of dollars opposing Trump while others have made relatively token expenditures.

Among them are super PACs devoted to other GOP candidates, as well as a solely anti-Trump super PAC. Known as Our Principles PAC, this anti-Trump group was founded by veteran Republican strategist Katie Packer, who helped run Mitt Romney’s 2012 presidential campaign.

Our Principles PAC alone has spent more than $16 million opposing Trump — more than any other group. Its largest donors are Marlene and Joe Ricketts, co-owners of the Chicago Cubs baseball team, who have combined to give $5.5 million. Republican megadonor and hedge fund magnate Paul Singer has also so far given $1.5 million to Our Principles PAC.

For their parts, the three pro-Cruz super PACs — Keep the Promise I, Stand for Truth and Trusted Leadership PAC — have combined to spend about $2.6 million against Trump, according to filings with the Federal Election Commission. Meanwhile, two super PACs supporting Ohio Gov. John Kasich — New Day for America and New Day Independent Media — have combined to spend about $287,000 so far attacking Trump.

Some of these ads, which featured a hippopotamus, alleged that Trump is a “hippo-crit” who “repeatedly says one thing [and] does another.” Others criticized Trump’s online education company as a “scam” and argued that Trump will “scam America too.” Still others called Trump “too reckless and dangerous” to be president.

“If Republicans want to win, we have to nominate someone who can actually defeat [Democratic Party presidential front-runner] Hillary [Clinton],” New Day for America spokeswoman Connie Wehrkamp told the Center for Public Integrity. “If Trump is the GOP nominee, we will lose the White House, the Supreme Court, the U.S. Senate and countless down-ticket races, not to mention Trump is entirely unprepared to hold the highest office in the world.”

Sustained anti-Trump advertising didn’t begin until February, a month during which roughly one-quarter of the ads in the GOP presidential race were critical of Trump, according to a Center for Public Integrity review of Kantar Media/CMAG data, a firm that monitors advertising on broadcast television and national — but not local — cable.

Anti-Trump TV ads represented nearly half the ads in the GOP race during March. The figure currently hovers near 30 percent so far in April.

Prior to February, blasting Trump wasn’t many conservatives’ top priority.

As of Jan. 31, the day before the Iowa caucuses, which Trump narrowly lost to Cruz, just 6.5 percent of TV ads in the GOP presidential race had criticized Trump. At that juncture, more than a dozen candidates were still competing in the Republican field, including well-funded former Florida Gov. Jeb Bush and Ben Carson, a retired neurosurgeon who briefly led Trump in national polls late last year.

“Early on, most campaigns were more focused on building up their own candidate in a crowded field than taking down Trump, whose popularity they likely did not fully understand,” said Jay Goodliffe, a professor of political science at Brigham Young University in Utah. “Before February, there were no elections, so the Republican campaigns and allied groups could hope that Trump’s support would be less strong once his supporters had to go to the polls.”

Elizabeth Wilner, the Kantar Media executive who oversees the firm’s political ad tracking project, added that the delay in anti-Trump advertising seemed to come from “a combination of denial and fear — denial that he could become the nominee and fear of messing with the bull.”

Trump often delights in prodding his political opponents, both in word and tweet. That includes big-money bankrollers who dare oppose him.

For example, he tweeted out an admonition to the Ricketts family that they “better be careful” once media outlets reported the Ricketts were funding an anti-Trump super PAC.

Amid the contentious primary, one presidential contender — more than any other candidate, including Republicans — has attacked Trump in campaign ads: Democrat Hillary Clinton.

To date, Clinton has sponsored nearly 8,000 ads that criticize Trump, including dozens of Spanish-language ads that aired as recently as this week in Connecticut and Pennsylvania, which both conducted primaries on Tuesday.

Such activity closely aligns with Clinton’s rhetorical pivot Tuesday away from Democratic primary opponent Bernie Sanders — he almost certainly can’t catch Clinton, but isn’t quitting — and toward the general election.

“Let’s go forward. Let’s win the nomination, and in July, let’s return as a unified party,” Clinton said during her victory speech Tuesday night in Philadelphia, which will also host the Democratic National Convention this summer.

Clinton campaign spokesman Jesse Ferguson told the Center for Public Integrity it was important to criticize Trump for his “divisive rhetoric and dangerous agenda.”

Ferguson added: “We will continue to make the case about the damage his agenda would do and how Hillary Clinton is the toughest candidate to take him on and stop him.”

Dave Levinthal contributed to this report.

This story is from the Center for Public Integrity, a nonprofit, nonpartisan investigative news organization in Washington, D.C. Read more of its investigations on the influence of money in politics or follow it on Twitter. 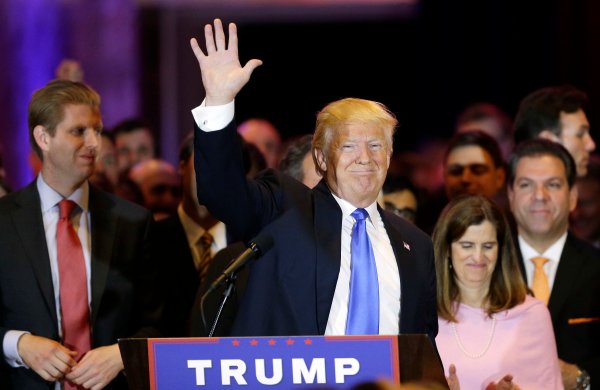