On the heels of a sweep of Northeastern primaries, Republican frontrunner Donald Trump outlined an “America First” foreign policy approach in what was billed as a major speech at the Mayflower Hotel in Washington, D.C.

“It’s time to shake the rust off America’s foreign policy,” he said. “My foreign policy always puts the interest of the American people and American security above all else. Has to be first. Has to be. That will be the foundation of every single decision that I will make. ‘America first’ will be the major and overriding theme of my administration.”

Trump first used the phrase “America first”—which is associated with 1930s-era isolationism—in an interview with the New York Times in March.

In the speech, he criticized President Obama’s nuclear deal with Iran and his trip to Cuba, said he would fight the Islamic State in Iraq and Syria by being more “unpredictable” and called for upgrading the U.S. nuclear arsenal, among other things.

The speech comes as the New York real estate mogul’s campaign has sought to portray him as becoming more presidential as he moves into the general election, even as the candidate himself has undercut that with some of his remarks.

Trump convention manager Paul Manafort argued at a meeting in Florida with members of the Republican National Committee that Trump was simply “playing a part” during his campaign speeches in the GOP primary, though Trump later mocked that at a rally in Connecticut by saying that acting presidential was “easy” and said he doesn’t like “toning it down.”

The foreign policy speech is the second major speech in which he’s sought to establish his bona fides for the Republican Establishment. In March, he gave a speech a speech to the American Israel Public Affairs Committee in which he mostly stuck to the script. 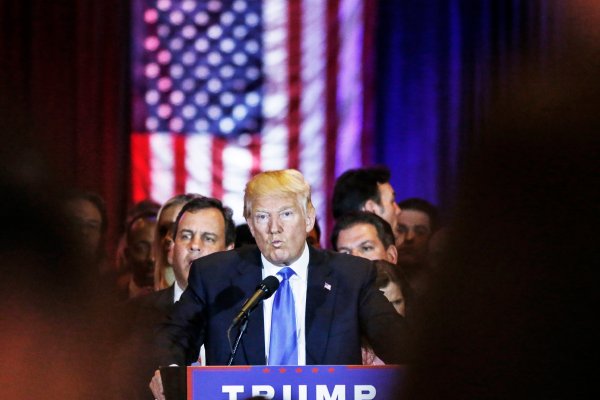 One in Five GOP Primary Ads Have Attacked Trump
Next Up: Editor's Pick