The Evolution of the American Mom in 7 Stories

circa 1960: A mother feeds her baby a bottle.
Hulton Archive / Getty Images
By Lily Rothman

Some aspects of being a mother never change. But, with Mother’s Day approaching this weekend, it’s worth remembering that society’s ideas of what made a newsworthy mother have shifted significantly over the years.

With help from the TIME archives, here’s a look at the stories and trends that have made motherhood news over the decades:

From the time of their birth in Canada in 1934, the Dionne Quintuplets captured the world’s attention. According to TIME’s initial report, they were “the 31st authentically known quintuplet in 500 years” and, after five days, they were the first known set to have lived that long. In retrospect, however, their mother’s story is a shocking one. When TIME caught up with the quints in a cover story in 1937, it was clear that their mother Elzire Dionne had been nearly replaced by the doctors who monitored the children. She had borne six children (five surviving) before the quints, and gave birth to another within about two years of the quints. By the time of her death in 1986, she had given birth to 14 children. But after the birth, her role in the quintuplets’ lives was minimal:

As war swept the world, the idealized 1940s woman could be found in the factory just as frequently as she was found at the family hearth. However, motherhood still usually meant an end to work outside the home:

In a 1960 cover story about the suburban wife, TIME trained its lens at the rituals of family life in America at the close of the suburbia-embracing 1950s. And, in a world where fathers were expected to be away at work in the city, the magazine found that the mother was the center of daily suburban life. The picture of her routines reads as stereotypically retrograde today, all cooking and cleaning, but lurking below that pre-Feminine Mystique picture of white American womanhood was an nod at her power:

Within a decade, much had changed. Among the options opened for women during the 1960s was the possibility of respectable single motherhood, and some women seized the chance:

By the 1980s, the topic of motherhood—at least on the conception side—was fodder for the science section, as individuals eager to become parents turned to new technology to help make their dreams reality. In 1984, TIME took a look at the new “age of the test-tube baby” and why more and more women were making use of the new technology:

Around the turn of the millennium, the big topic in motherhood was the struggle with work-life balance. As shown by a number of TIME articles over the years, women were confronting the sometimes conflicting desires to be have both family and career. Though some women chose not to have children on purpose, this 2002 cover story described what happened to those who found themselves approaching that situation with regret:

TIME caught up with the first-ever married American battalion commanders going into battle together, Lieut. Colonel Laura Richardson and Lieut. Colonial Jim Richardson. Though the Richardson’s situation was unique, the increasing number of women serving in the military meant that more and more women were, like Laura Richardson, confronting what it meant to be both mom and soldier: 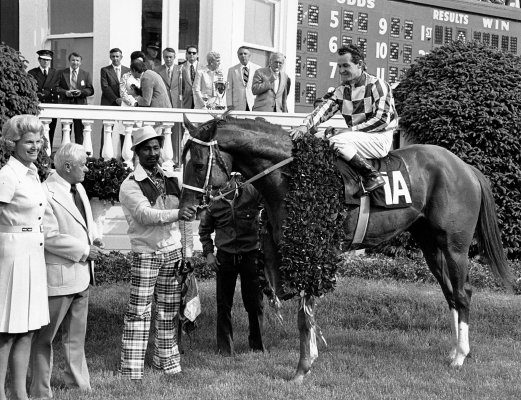 A Brief History of the Kentucky Derby Hat
Next Up: Editor's Pick