The 49-minute pep talk that President Barack Obama delivered on Monday to a hall full of students in Hannover, Germany, hit many of the same notes as the speech he gave in Berlin in 2008, during his first campaign for the presidency. The European Union, he said back then, had arrived at another juncture in its history, one that would challenge countries like Germany to tear down the walls between “nations and tribes, natives and immigrants,” much as Berliners had torn down the wall that divided their city during the Cold War.

Pushing hard on that historical analogy, Obama asked a crowd of about 200,000 people that summer: “Will we welcome immigrants from different lands, and shun discrimination against those who don’t look like us or worship like we do, and keep the promise of equality and opportunity for all of our people?”

Eight years later, the world has something like an answer to his question, and it may not be the answer Obama wanted to see. The arrival last year of more than a million asylum seekers, most of them from the warzones of Syria and Iraq, has tested Europe’s willingness to open up. And despite an early and euphoric abundance of Germany’s famous Willkommenskultur, Europe is failing the test that the arrival of these refugees has presented.

Even as Air Force One touched down in Germany on Sunday for the last leg of Obama’s foreign tour, voters in neighboring Austria were handing a major victory to the nativist and xenophobic forces of the far right. Norbert Hofer, the candidate from the nationalist Freedom Party – who is known to carry a pistol even in the halls parliament to protect himself from refugees – handily won the first round of voting for the presidency, a ceremonial office in Austria but one imbued with a great deal of moral authority. When the final results came in on Sunday, Hofer had 36.7 percent of the popular vote, more than three times as much as the candidates from the establishment parties that have dominated Austrian politics since the end of World War II.

“It is really horrible, this situation in Austria,” said Sabrina Wilm, one of the German students who came to listen to Obama’s speech on Monday in Hannover. “We have the same things going on in Germany.”

Not quite to the same extent. But in the past year, support for the far-right Alternative for Germany has surged to around 14 percent, according to the most recent polls, which suggest that the anti-immigration party is now the third most popular in Germany. Much of that support has been siphoned away from the conservative Christian Democratic Union, the party of Chancellor Angela Merkel, who attended Obama’s speech on Monday in Hannover.

For her, the visit from the U.S. President was a much-needed vote of confidence. Merkel’s approval rating has sunk to the lowest levels in years, largely because of her willingness last summer to open Germany’s doors to a deluge of migrants and refugees. In his speech, Obama made sure to cast that decision as a moral triumph.

“In Germany, more than anywhere else, we learned that what the world needs is not more walls,” Obama told the auditorium packed with a few hundred people. “We can’t define ourselves by the barriers we build to keep people out or to keep people in. At every crossroads in our history, we’ve moved forward when we acted on those timeless ideals that tell us to be open to one another.”

To anyone who attended the Berlin speech of then-Senator Obama, this may have sounded like a rehash. But the remarks this time around were delivered to a very different country. The Germany of 2008 had yet to experience the global financial crisis, the rise of the terrorist group known as ISIS, and the exodus of refugees that ISIS’s conquests in Iraq and Syria have helped create.

“That does seem like a long time ago,” says Ben Rhodes, who helped write Obama’s Berlin speech in 2008 and has since become the President’s Deputy National Security Adviser. “But if you look at the Berlin speech, and you look at what the President wanted to get done when he came into office, we have been able to affect a significant amount of change around the world,” Rhodes told reporters before Obama’s remarks on Monday.

In particular, he listed the hard-won deal to end Iran’s nuclear program, the global accords on climate change reached last year in Paris, and the broader shift in American foreign policy from unilateral action toward coalition building and diplomacy. “I think we have been able to follow through on those commitments,” Rhodes says.

Relations with Germany have also been a bright spot in Obama’s foreign policy. While Merkel was skeptical about the presidential bona fides of the junior Senator from Illinois – famously denying his request to deliver his 2008 speech in beneath the iconic chariot of Brandenburg Gate – she has since become one of his closest allies, close enough for Obama to poke a bit of fun at her on Monday morning. “I truly believe you’ve shown us the leadership of steady hands,” Obama said, imitating the way she likes to hold her hands in public, with the fingers arranged in a sort of rhombus, or as the Germans call it, a Raute. “How do you call it?” Obama said with a smile. “The Merkel Raute?”

There had been more of the same the previous night when the two leaders hosted a dinner for business executives as part of the Hannover Messe, the world’s largest industrial trade fair. As the subject turned to trade negotiations between the U.S. and Europe, “there were friendly little jabs at each other,” says Andrew Liveris, the CEO of the Dow Chemical Company, who attended the dinner. “It’s an exceptionally good relationship, and it permeated the whole dinner conversation.”

That levity may have helped cut through the challenges Obama laid at Germany’s feet during his speech the following day. Perhaps the most difficult was his push for Germany to embrace its position as a country of immigrants – much like the U.S. has done throughout much of its history. “I want you to remember that our countries are stronger, they are more secure and more successful when we welcome and integrate people of all backgrounds and faith,” Obama said.

Even before last year’s influx of refugees, Germany was the main destination for migrants in Europe, taking in 465,000 newcomers in 2013, double the number that arrived in 2007. To the dismay of the conservatives in her ruling coalition, Merkel welcomed them. “There is something enriching if someone wants to come to us,” she told a town-hall meeting early last summer.

But as her ratings began to plummet amid the tide of new asylum applications – and especially after migrants committed a spate of sexual assaults and robberies on New Year’s Eve in Cologne – Merkel began to turn away from that position, a shift that Der Spiegel magazine referred to as a “quiet capitulation.”

As part of a deal agreed in March to stem the flow of refugees into the European Union, members states from Scandinavia to the Balkans have sealed their borders to migrants. In Germany, too, xenophobia has overshadowed the idealism of Wilkommenskultur, and Merkel has stopped referring to Germany as a nation of immigrants.

For Merlin Helwes, another of the students who attended Obama’s speech, the shift was necessary to stop the rise of the radical right. “Now I think it will pass,” he says. “We will not become like Austria now that the flow of refugees has gone down.” But what about the remarks he had just heard from the American President, calling for Germany to keep its doors open? “It’s optimistic,” he said. “It may take time.” A lot more time than Obama has left in his tenure. 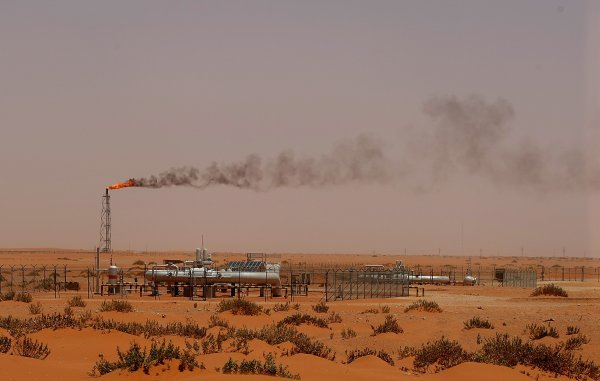 Saudi Aramco IPO Is a Distraction From Real Oil Issues
Next Up: Editor's Pick