Democratic presidential candidate Bernie Sanders speaks during a rally at the Fitzgerald Field House on the campus of the University of Pittsburgh on April 25, 2016 in Pittsburgh, Pennsylvania.
Jeff Swensen—Getty Images
By Sam Frizell

Bernie Sanders on Monday aired a stubborn position on the election: If he loses the Democratic nomination, he will help Hillary Clinton in the fight against Republicans. But he is not giving up on central parts of his platform.

At a town hall meeting hosted by MSNBC on Monday evening in Philadelphia, Sanders was asked what he would do to mobilize his supporters to continue his policy proposals, assuming he lost at the Democratic convention.

Sanders said that “If we end up losing,” it would be “incumbent upon [Clinton] to tell millions of people who right now do not believe in establishment politics and establishment economics” that she supported Sanders’ Medicare-for-all plan.

“I think Secretary Clinton is going to have to explain to millions of young people and a lot of other people that climate change is a real crisis and incrementalism is just not going to solve it,” he added.

Clinton is highly unlikely to embrace any of Sanders’ policy proposals, which would cost trillions of dollars over the next ten years. She has repeatedly rejected those ideas, saying that Sanders’ Medicare-for-all proposal would require the United States to scrap the Affordable Care Act and that his free tuition at public colleges would require compliance from Republican governors.

The former Secretary of State said as much on Monday night, during her own town hall meeting.

“I am winning. And I’m winning because of what I stand for and what I’ve done,” Clinton said. “I have 2.7 million more votes than he has. I have more than 250 more pledged delegates. I’m very proud of the campaign that we have run and the support we have gotten and of course we’re gonna work together.”

She argued she has a better plan for regulating Wall Street than Sanders does, and pointed to the 2008 election, when she supported the then-Sen. Barack Obama.“I spent an enormous amount of time convincing my supporters to support him. And I’m happy to say the vast majority did,” Clinton said.

Though both the candidates suggested they were taking a hard position ahead of the convention in the case that Clinton wins, Sanders also said he would do what he could to prevent a Republican from winning in November.

“I will do everything in my power to make sure no Republican gets into the White House in this election,” Sanders said. 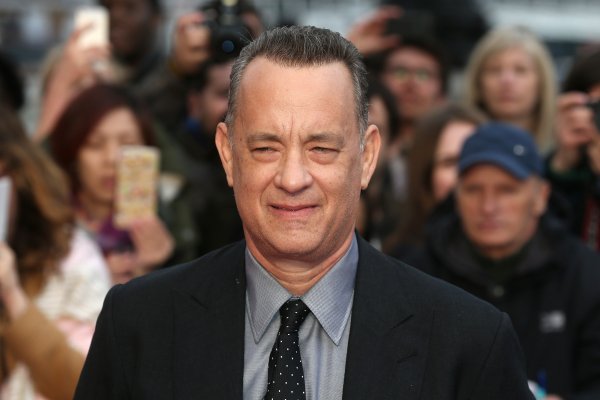 Tom Hanks Says Donald Trump Will Be President When 'Spaceships Come Down'
Next Up: Editor's Pick