I want Hillary Clinton to be President. I think she’d do a fantastic job, better than anyone else.

Yes, I admit, I’m pretty worked up about the possibility of a woman President: it’s something I thought was impossible, maybe even illegal, when I was a little girl. But one thing I’m not, as I’m routinely told, is ill-informed or ignorant — supporting Hillary only because of our shared anatomy. I have no plans to blindly follow my uterus to the nearest polling station.

So once and for all — for everyone who asks me online, for the waitress who took me aside after serving me an omelet and said, “I’m so confused about what to do in this election” — here’s why I’m voting for Hillary Clinton.

I’m with Hillary because of her commitment to women’s reproductive health and rights. The quest for reproductive care can be lonely, scary and crushingly expensive. As someone with a chronic reproductive illness who frequently receives treatment from kind, expert doctors and nurses, I believe all women and girls — even if they aren’t on premium cable — deserve that same level of care. As Senator, Hillary fought to protect Roe v. Wade from Republican attacks and led the charge to stop the Bush Administration from making it harder for women to get emergency contraception. At a time when Republicans are practically giddy about their attempts to slash funding for Planned Parenthood, Hillary says she’ll actually fight for more funding. Planned Parenthood doesn’t just provide abortions. It is the primary health care provider for so many women, and now many of our trans friends and family. Hillary recognizes how a loss of funding would devastate these people and their families. She also wants repeal the Hyde Amendment, the dangerous law responsible for the deaths of women like Rosie Jimenez, because she holds the (somehow still revolutionary) belief that even low-income women deserve access to safe reproductive health care.

Our country suffers from the disease of systemic racism. I’ve been moved by the stories of people across the country who attest to Hillary’s decades of working for social justice in their communities. She’s gone beyond any politician I’ve ever heard in laying out white people’s responsibilities in ending racism (spoiler alert: we have a lot of work to do). And in honor of people like Sandra Bland — by all accounts an incredibly driven, smart-as-heck woman who should still be with us — I’m relieved that Hillary has a comprehensive plan addressing injustice in policing and criminal justice. Among other things, she wants police to wear body cameras, will fight to end racial profiling in policing and will eliminate the sentencing disparity between crack and powder cocaine (a superweird and racist policy that just shouldn’t exist anymore). Additionally, she has a detailed and compassionate plan for helping people reintegrate into society once they’ve served time, a plan that would involve banning the box (the law that requires ex-offenders to disclose their criminal record on a job application before they can prove their qualifications) and therefore provide real job opportunities.

I’m with Hillary because of her plan to quell the gun violence that regularly sends our nation into mass grief. Gun control is a feminist issue — guns are responsible for more intimate partner killings than all other weapons combined, and women are the primary victims of deadly domestic violence. But in 35 American states, the law doesn’t prohibit those convicted of misdemeanor domestic violence from buying guns (or keeping the ones they already have). Hillary has a plan specifically to keep guns out of the hands of domestic abusers. Meanwhile, Senator Bernie Sanders has voted against the Brady Bill five times.

As a sexual-assault survivor, I’m deeply concerned about protecting women and supporting them if they’ve been violated. When Hillary was my Senator in New York, she quietly introduced a law to make emergency contraception available to women who are raped. When it became evident that women in uniform are particularly vulnerable to sexual assault, she introduced a law making emergency contraception available to them too. That’s the kind of seemingly small but utterly essential policy work that makes me confident in her holistic approach to protecting the vulnerable.

Right about now, a Sanders supporter might interject to say that Bernie would fight just as hard for women, or — and this really turns me into a growling beast — that his policies are actually better for women.

I respect Senator Sanders and his supporters. I am turned on by how informed and invigorated they have been throughout this campaign. And there’s a lot in Senator Sanders’ voting record to cheer about. But there’s no comparison between his commitment to fighting for women and Hillary’s. None. This has been her life’s work and she comes at it from every direction.

She fights for equal pay. She raises money for other women running for elected office. She stays current on prenatal-nutrition research. (Though when the time comes for me to have my baby, just let me eat in peace, O.K., Hillary?) She flies to countries where women are routinely denied basic freedoms — from China to Yemen to the Democratic Republic of Congo — and puts their leaders on blast. She coined the phrase “women’s rights are human rights,” for goodness sake!

In a million ways, for women and girls in every walk of life, Hillary does the damn thing.

I just don’t see that from Senator Sanders. When Donald Trump said women should be punished for seeking abortions, Bernie’s response left me cold. “Any stupid, absurd remark made by Donald Trump becomes the story of the week,” he said. “Maybe, just maybe, we might want to have a serious discussion about the serious issues facing America.” As someone terrified by Trump’s flailing ginger wig of a candidacy, I took his words very seriously. We all should.

Of course I recognize that Hillary’s not perfect. She’s been working hard in the public eye for a long time and she’s made mistakes. It would be weird if she hadn’t. She’s repeatedly said that her greatest regret is her vote for the war in Iraq, and I agree that was a huge miscalculation. I believe she worked her heart out as Secretary of State to make up for it. Wouldn’t it be cool if everyone else who voted for that war did as much to promote peace and human rights around the world?

So I’ll say it again: I’m with her. Not as some winsome nod to “girl power,” but because I share her bone-deep belief that when women are strong, families are strong, and that makes our country strong. I’d like to think that if a male candidate expressed that sentiment this clearly, I’d be hauling my ass around Iowa for him too (love you, Iowa!).

That said, dudes, I’m allowed to be excited that the most qualified and battle-tested candidate in this race is a woman! It’s O.K. that it makes my chin wobble with urgent emotion. I refuse to separate my politics from my pride in being a woman. When barriers for women fall, the world becomes a better place for everyone — especially when they’re kicked down by the baddest lady in the game. 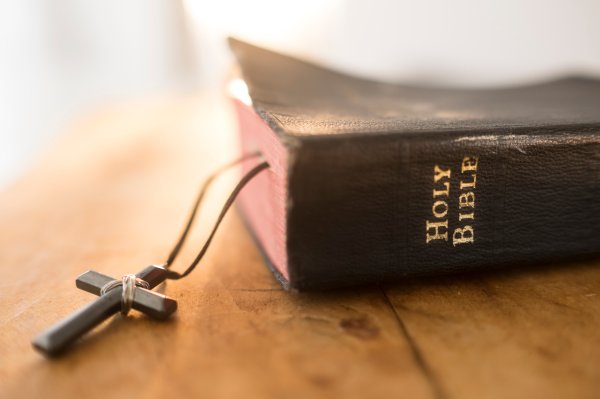 Tennessee Wasn't First State to Attempt to Make the Bible the Official State Book
Next Up: Editor's Pick