Egypt Clamps Down on Protests Over Red Sea Islands

Egyptian security forces quickly snuffed out a series of protests across Cairo against the government’s decision to transfer control of two Red Sea islands to Saudi Arabia.

The successful clampdown reverses a sense of momentum enjoyed by opposition groups after they staged the largest protest in Egypt in over a year on April 15, also in reaction to the handover of the islands, Tiran and Sanafir.

Police in riot gear deployed in force in Cairo’s central districts, cordoning off locations where dozens of activists had called for demonstrations, such as the steps of the Journalists Syndicate downtown. Security forces also policed the entrances to Tahrir Square, the scene of multiple waves of protests since the mass uprising in 2011 that ejected President Hosni Mubarak after some 30 years in power.

Chased away from the designated protest locations, protesters appeared in a square in the upper middle class neighborhood of Dokki, chanting “down with military rule!” Police fired tear gas, scattering the demonstrators.

Later, heavily armed security forces arrested would-be demonstrators on the neighborhood’s main streets. Police led away one man, his hands bound, as riot police blocked off the street. Across the street, onlookers tried to ascertain the identity of the detained man. “He looks like your uncle,” one man said to another. Nearby, a masked riot police officer stood on the median strip of the divided road, holding a rifle in one hand and motioning for cars in the opposite lane to keep driving.

The decision to cede control of the islands has sparked nationalist anger against the government of President Abdel-Fattah al-Sisi, and served as a pretext for Egyptians to express discontent over a broad range of issues, including the regime’s handling of the economy and ongoing rights abuses by its security forces.

The government insists the islands are Saudi territory, and had been administered by Egypt under an agreement with the kingdom since the 1950s. Saudi Arabia is a critical ally of the Egyptian regime, providing billions in financial assistance in recent years.

The decision angered some Egyptians who saw the handover as a capitulation to a foreign power, and roughly 2,000 protesters appeared on the streets of Cairo and Alexandria on April 15. Those protests ended after several hours, with opposition groups calling for another protest on April 25, an Egyptian national holiday commemorating the return of the Sinai Peninsula from Israel.

Since the two islands lie off the coast of the Sinai, the call for protests offered a critical interpretation of the holiday, known as Sinai Liberation Day. One Facebook page called on the government to “liberate Sinai for real.”

In the days prior to the protest, the security forces launched a campaign of arrests activists said were designed to forestall the demonstrations. According to a joint statement from 16 Egyptian human rights groups, police arrested at least 90 people including activists, lawyers, and journalists in eight provinces. Police raided homes and cafes and detained activists at police checkpoints. Egypt’s interior minister, Magdy Abdel Ghaffar, said anyone who joined the planned protests would be crossing a “red line.”

Early Monday morning, police raided the home of one prominent rights activist, Ahmad Abdallah, the director of the board of the Egyptian Commission for Rights and Freedoms. “We declare our concern regarding the brutal crackdown currently affecting everyone with no exceptions in Egypt,” the group said in a statement.

President Sisi, who came to power following a military takeover in 2013, is facing mounting criticism from parts of the Egyptian public and normally supportive mainstream media. When he first assumed office, Sisi enjoyed a significant cult of personality fueled by a wave of militant nationalism and a backlash against the government Sisi deposed, led by Mohamed Morsi of the Muslim Brotherhood.

The current government’s plans to boost the Egyptian economy have stalled as the currency falls and insurgent attacks keep tourists away. In addition, a series of high-profile incidents have drawn new attention to the abuses of the security forces. In one incident last week a police officer shot a man dead in the street outside Cairo, following a dispute over a cup of tea. An angry crowd gathered, flipping over a police car.

The Egyptian state is also grappling with worsening anger overseas over the killing of an Italian doctoral student, Giulio Regeni, whose tortured body was found beside a desert highway in February, more than a week after he went missing in Cairo.

Last week, Reuters published a report that quoted Egyptian security officials saying Regeni had been detained by police prior to his death, an account consistent with reporting from the New York Times and other international media. A police official later lodged a legal complaint against the news agency. The New York based Committee to Protect Journalists called the complaint “disturbing.” 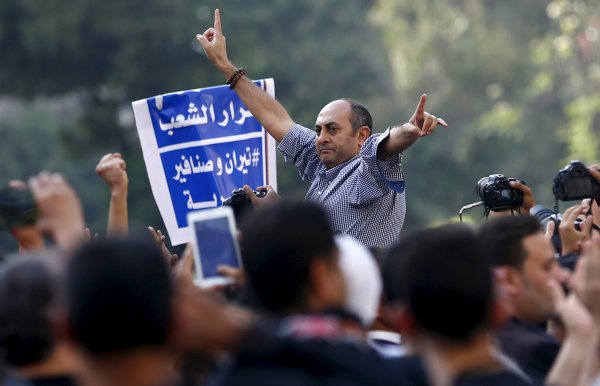 Egypt Takes to Streets Over Red Sea Islands
Next Up: Editor's Pick