Based on the ‘Spider-Man’ creator’s first Indian superhero character Chakra, launched back in 2011, the live-action film will be directed by Vikramaditya Motwane, whose debut film screened at the Cannes festival.

Stan Lee’s first Indian superhero character launched as a comic book, Chakra the Invincible, back in 2011. In late 2013, animated TV films launched on Cartoon Network India. After first stating in 2014 that he was in talks to develop a Bollywood version of Chakra, the project is now greenlit with a director and studio attached.

Chakra was originally developed as a superhero property by Lee’s POW! Entertainment with Indian character entertainment company Graphic India. The comic revolved around an Indian teenager, Raju Rai, a technology genius living in Mumbai. Determined to use science to unlock the secrets of human potential, Raju develops a technically enhanced suit that activates the mystical chakras of the body, unleashing newfound abilities and powers.

For the film version, Graphic India and POW! Entertainment have partnered with Phantom Films. The live-action film will be directed by Vikramaditya Motwane, who is one of the co-founders of Phantom along with well-known director Anurag Kashyap (Gangs of Wasseypur). Motwane’s 2010 debut Udaan screened at the Cannes film festival.

Motwane is currently working on the Chakra screenplay with Lee and Graphic India co-founder and CEO Sharad Devarajan. Phantom’s Madhu Mantena will produce the film with Devarajan and POW! Entertainment’s Gill Champion. The film version of Chakra, for which a budget was not given, will feature an older version of the titular character in his 20s, unlike the animated kids property.

“I’m a fan of Bollywood films and am really excited about launching Chakra the Invincible as my first Bollywood superhero movie,” Lee said in a statement. “Vikramaditya is an amazingly talented filmmaker who I have no doubt can make the Chakra film a massive hit in India and around the world. I only hope he remembers to include my cameo!”

“It’s an honor and an absolute delight to be making a film based on a Stan Lee character,” said Motwane adding, “And no, we won’t forget Stan’s cameo…”

Highlighting that “Stan Lee’s characters have generated $15 billion at the global box office” and arguing that “more people likely know the face of Spider-Man than they do the Mona Lisa,” Devarajan added that in Motwane “we have been fortunate to find both a groundbreaking director and a passionate comic book fan, who will be able to create something uniquely Indian, but also authentic to Stan’s pantheon of superhero storytelling.”

Three new Chakra the Invincible animated TV movies are currently in production and set for release on Cartoon Network India later this year. A digital mobile series was also launched on Rovio’s ToonsTV available through the Angry Birds game.

Read More: Stephen King’s ‘It’ Gets a Release Date From Warner Bros. 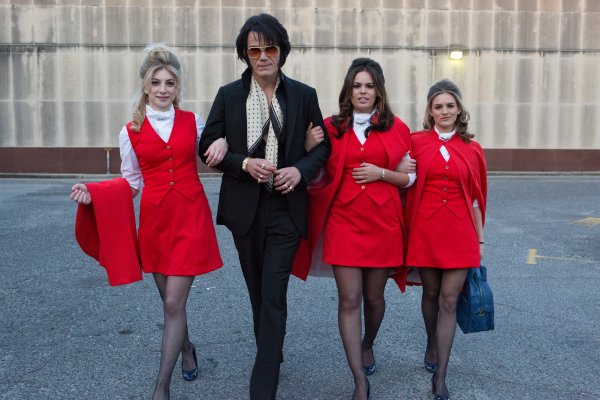 Michael Shannon on His 'Behind-Closed-Doors, Private Version of Elvis'
Next Up: Editor's Pick