Donald Trump Tones Down the Bombast on the Campaign Trail

So, this is what Donald Trump on his best behavior looks like.

The Republican frontrunner counted the number of residents in Delaware’s Kent County who are on food stamps. He pointed to median household income’s decline in the state. Even when criticizing rivals Ted Cruz and John Kacish, Trump stuck to his problems with their trade policies over the personal attacks.

“They should both get out. They cannot win,” he said of his rivals during a Friday evening rally at the Delaware State Fairgrounds. “When they get out, we will start on Hillary Clinton like nobody’s ever seen.”

The billionaire in recent days has shelved some of the more outrageous fixtures of his campaign speech in favor of a more presidential approach. “All campaigns pivot,” shrugged one Trump insider. “This evolution was going to happen sooner or later.”

And when protesters interrupted Trump’s remarks on Friday evening, he was restrained. He stepped away from the podium as volunteers ushered them from the barns. “Those are the people we love,” Trump said. Gone was his earlier suggestion that protesters deserved to be punched in the face.

That’s not to say the braggadocio is fading. Trump arrived at the fairground by helicopter and bragged that he has 378 businesses registered in the state. He excoriated the assembled reporters as “the world’s most dishonest people back there,” to jeers from the crowd. And, predicting unmatched interest in a Trump-Clinton contest, he promised “the greatest turnout of voters in the history of the United States.”

Still, it is certainly more in keeping with campaign civility than his statements during one Michigan debate when he insisted to audiences that his penis was plenty large, thank you very much. Defying political correctness has brought Trump so far, but apparently outright brashness has its limits.

The change comes as Trump has transferred day-to-day power to a new de facto chief, GOP veteran Paul Manafort, and limited the power of his sometimes controversial campaign manager Corey Lewandowski. The internal jostling shifted control of delegate-chasing, hiring and media strategies to Manafort, who reports directly to Trump. The campaign is also reviewing all of Lewandowski’s spending.

One of Lewandowski’s top lieutenants, Stuart Jolly, resigned last week, and there are signs that the aides who were with Trump when he started this run would soon be sidelined or dismissed, too, to make room for Manafort’s team, which includes former Scott Walker campaign manager Rick Wiley. It makes for fascinating Kremlinology inside Trump Tower.

The shift has been slow, but it’s noticeable in how Trump is campaigning. “You cannot allow policy that allows these business to be ripped out of the state, like candy from a baby,” Trump said as he stood in a livestock arena and kept his remarks unusually focused on policy.

Maybe audiences are finally starting to meet the real Trump. Manafort told members of the Republican National Committee this week that Trump’s bombast has been little more than an act aimed at firing up disaffected voters. Manafort also promised the party elites during a closed-door briefing in Florida that Trump would start to tone down some of his theatrics, suggesting that the boorish businessman would start to more closely resemble a traditional candidate.

As he declared victory earlier this week in the New York primary, he even deigned to call Cruz a “Senator” — not “Lyin’ Ted.” The nickname has since returned, but Trump is doing his best to calm skittish party insiders who have been shocked at Trump’s success. Instead of mocking Cruz, Trump picked apart his votes against cracking down on Chinese currency manipulation.

“Being presidential is much easier,” Trump chuckled on Friday. “We’re going to be very presidential.”

All campaigns add bodies and move tactics as they get closer to the nomination. Mitt Romney four years ago brought back into the fold media adviser Kevin Madden when summer arrived and basically borrowed the staff of then-House Speaker John Boehner to run the VP team. John McCain eight years ago brought aboard members of the George W. Bush administration to reboot his race against Barack Obama. John Kerry fired his campaign manager and dismissed his top spokesman even before the primaries and caucuses in 2004.

Trump, who prides himself on his loyalty to staff, is showing a reluctant acceptance that the team that brought him this far might not be suited to the rough-and-tumble race against Clinton. While polls show Trump competitive with the likely Democratic nominee, even his most defensive advisers acknowledge that national polls at this point are meaningless and a waste of money this far from voting. Trump’s team expects the polls to tighten—if not flip to Clinton’s favor—as voters are presented something more than a theoretical choice between the two New Yorkers. A real campaign is going to be needed.

Trump, too, is showing signs he’s shifting from the ad-hoc operation that has logged wins through his media savvy. A sign that Trump’s machine is maturing, he has opened three offices in Delaware, ahead of next week’s primary. And next week, Trump is slated to deliver what advisers are describing as a foreign policy address at Washington’s National Press Club.

It’s not clear that Trump’s supporters will react fondly to the shift. After all, independent vendors outside his event on Friday were still selling T-shirts silkscreened with this gem: “Ted Cruz sucks. Hillary Clinton swallows.” Another offering urges supporters to “Trump That Bitch.” Trump’s appeal has been that he refuses to conform, that he does everything that he can to be provocative, if not offensive.

Perhaps nodding to his more somber turn, Trump cast himself as a reluctant candidate who was drafted into the campaign out of patriotism. “I love this country. This country has been so good to me. Really,” Trump said. “We need a great, great President.” And, perhaps, a candidate who acts like one. 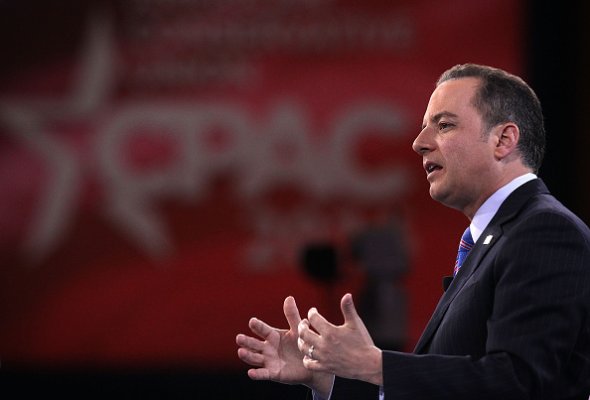