China Warns Against Falling in Love With Foreigners in New Poster

The Chinese government pasted posters warning against falling in love with foreign strangers and handing over state secrets in honor of a new holiday: National Security Education Day.

National Security Education day falls on April 15 and was launched after a new law that called for greater political, territorial, military, cultural and technological security, the New York Times reports. Sharing state secrets is a serious crime in China. A man was recently sentenced to death for selling documents to foreign spies between 2002 and 2011, according to Reuters. The man was a former computer technician; he shared over 150,000 classified documents.

Last Friday, however, a poster warned women not to be wooed by foreign men looking to nab state secrets. The posters were titled “Dangerous Love” and featured a cartoon depiction of a love story gone wrong.

The young woman in the 16-panel cartoon is a civil servant named Xiao Li who falls for a red-headed foreigner she meets at a party. The Guardian reports the posters appeared on public bulletin boards to target low to mid-level employees. The posters also appeared in Beijing’s financial district, where many foreigners work.

The NYT asked about a dozen passersby if they were at all swayed by the signage, but few even noticed it. Those who did couldn’t understand it.

“How could ordinary people know anything about state secrets?” one man asked. “If even young girls know secrets, what kind of secrets are they? 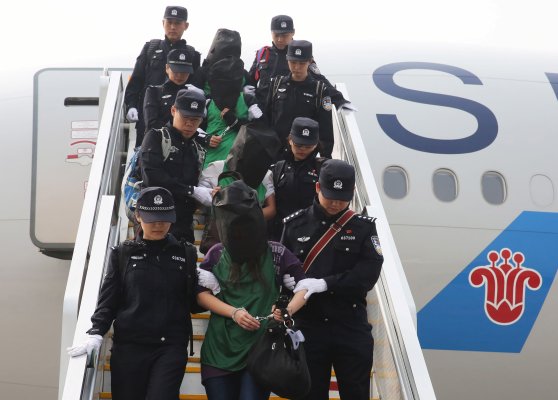 China's Law-and-Order Dispute With Taiwan
Next Up: Editor's Pick