In a shop under the tangle of neon signs that line Kowloon’s Tsim Sha Tsui commercial district, tailor Manu Melwani sat in a cloud mourning the loss of another client this year, Prince.

The iconic musician died on Thursday aged 57 at his Paisley Park estate in Minnesota. By Friday, news of the death had echoed around the world and hit Melwani when he turned on his television. He was shocked. Prince was too young, he says.

Melwani and the musician met 13 years ago when Prince came to Hong Kong as part of a world tour. Before the showman took the stage and played his bursting hits for of thousands and thousands of fans, he stood with Melwani in Sam’s Tailor, the snug premises nestled in the back corner of an aging arcade on Nathan Road.

Prince knew exactly what he wanted, Melwani says. Two single-breasted, 3-button suits in silver with silver lining, cut from fine Italian silk and constructed without a back vent. “He was very skinny,” Melwani tells TIME, and “spoke very little.” A band of 15 tailors started to work on the clothes immediately, sewing carefully but with haste enough to finish the suits within 48 hours. The singer wanted the outfits for his show.

“He wore my suit,” Melwani says. A simple thought, but what clothier could ask for a better compliment?

Melwani is no stranger to stars. A parade of the world’s most famous and powerful people have visited Sam’s Tailor since his father opened the store in 1957. Photographs of the tailor alongside Presidents, royalty, actors, athletes, models and musicians hang throughout the store, more numerous than the bolts of bright fabric that line the shelves. Where else might you find pictures of Michael Jackson, Bill Clinton and Kate Moss on the same wall?

But one photograph is missing: Prince’s. “He didn’t want a picture,” Melwani says. So the tailor is left with his memories as he sorts through the recent loss. It won’t be easy though. “I just lost [another] good friend of mine,” Melwani says, “David Bowie.” The British musician, who died in January, was another one of his regular customers. 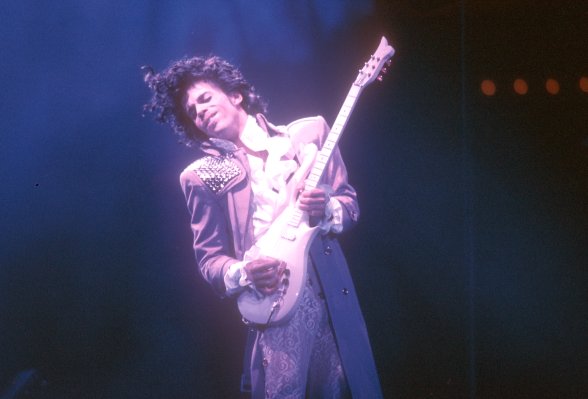