“What are your concerns about Zika?” Dianca Sierra, a program coordinator at University Hospital at Centro Medico in San Juan, Puerto Rico asks a circle of five pregnant women. The women, some with partners, are kicking off a group session program to learn the ins and outs of becoming a parent. And if pregnancy jitters weren’t enough, the emerging Zika outbreak in the territory adds a new layer of anxiety.

“Every mother wants to have a normal baby,” says Desiree Vazquez, 28, who is 26 weeks pregnant with her third child. “When I wasn’t pregnant I wouldn’t wear bug repellant, but now I put it on at 7 a.m. and reapply. I don’t like the hot weather, but I wear long clothing. I’ll do what I have to do what’s best for my baby.”

Health authorities estimate that Puerto Rico, which has over 500 confirmed cases of Zika so far, could have hundreds of thousands of infected people. Currently there are over 40 pregnant women in the country who are infected, and that number is expected to rise. No babies have been born with microcephaly so far, but the connection was recently declared definitive. The territory also has a major mosquito problem. More than 80% of adults in Puerto Rico have been infected with dengue, and about a quarter of adults became infected with chikungunya in less than a year.

Puerto Rico’s public health responders have launched an emergency mission to try to protect mothers and their babies. When the outbreak first started, officials called every pregnant woman registered with the territory’s Women, Infants, and Children program, and told them to come in for mandatory Zika information. A temporary WIC clinic offers Zika information sessions in a large shopping mall in San Juan, and health workers are giving out Zika prevention kits that consist of bug spray, a mosquito net and one condom. The territory also happens to be in the midst of a debt crisis.

One of the primary challenges, experts say, is racking up enough concern to get people to take action. Pregnant women aside, several health workers and residents told TIME that concern over Zika isn’t high, in part because people are used to mosquitoes giving them illnesses, and Zika doesn’t seem all that bad in comparison. “When people have chikungunya they can’t even move sometimes,” says Hector Colon, deputy director of Puerto Rico’s office of public health preparedness and response. “Eighty percent of the people with Zika don’t present symptoms. People think it’s just something that is going around.”

Even people who know better, occasionally lapse. “I didn’t put repellant on this morning,” says Dr. Susana Schwarz, who was working with pregnant mothers at Centro Medico. “I’ve had dengue twice.”

The problem is people are part of the spread. If an uninfected mosquito bites a person with Zika, that mosquito can now pass it along to someone else. Puerto Rico health officials have recommended that women put off getting pregnant if they can. “For young women who have plenty of time, I say delay,” says Dr. Evelyn Zeda, the medical director of Profamilia, a sexual health and services group in Puerto Rico. “Women who want to have a baby and are over 30, I tell to take all the precautions to avoid Zika and remember it’s also sexually transmitted.”

In the meantime, responders want people to stop taking the virus lightly. “I think people are waiting for the first case of microcephaly,” says Dana Miro, the executive director of the Puerto Rico WIC program. “People say, ‘If I don’t see it, I won’t believe it.'” 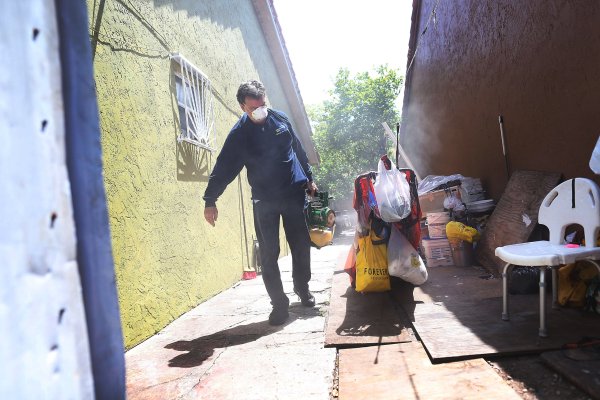 How the United States Is Bracing for Zika
Next Up: Editor's Pick