The already unusual campaign season could see an even more unlikely spectacle in August: the Republican presidential nominee striding into a San Diego courtroom to testify that one of his former ventures was not fraudulent.

“Whenever it happens, it happens. But, you know, I would imagine the courts would make it not go on during a campaign,” Trump told TIME in a recent phone interview about this history of litigation. “I would think that would be very unfair.”

But that doesn’t mean he is willing to settle the case, an option he says has been open to him in the past. “I don’t know when the case goes,” he says. “But it’s a case that I could have settled and I’d rather go to court.” The billionaire real estate mogul says he’ll mount a vigorous defense against those who argue that his now-defunct for-profit Trump University was nothing more than a brazen moneymaking scheme.

Such is the way of Donald Trump in the courtroom. For decades, he has been a frequent litigant in civil cases, both as plaintiff and defendant. And without fail, he has entered each battle focused with a similar strategy of public defiance and private calculation. While he claims to never settle lawsuits, he has done so numerous times. Through it all, the most important rule has remained constant: Whatever the outcome, he will declare himself the winner.

In the interview, Trump admitted that his public claims—“I don’t settle lawsuits, very rare.”—were incomplete. What is true, he argued, is that he never loses. “Generally, I am not a settler,” he said. “If I do a good settlement or a fair settlement, I’ll settle.”

In Trump’s eyes, legal settlements on some cases are just another deal. Take, for instance, his fight with a Florida zoning commission over the enormous American flag that flies over his Mar-a-Largo estate. The flag was larger than some New Yorkers’ apartments with a pole was twice as tall as zoning rules allowed. Trump refused to yield and filed a $25 million countersuit against the town, claiming his free-speech rights were infringed.

Trump essentially bullied his way to a deal with the Town of Palm Beach to move the flagpole, make it 10-feet shorter, and very slightly reduce the size of the Stars and Stripes. He also refused to pay the fine to the zoning board and instead insisted the $100,000 go to charity.

“I got what I wanted, right?” Trump said. “I gave a certain amount of money to charity, which I would do anyway. The flag is the same size as it was. It was fine. It was a good settlement. That made sense. You don’t want to go to court and fight for three years when they’ve already said you could keep it.”

His other lawsuits have not been as innocuous as the fight over a flag.

He cut off his grand-nephew’s health coverage amidst an inheritance dispute. He settled a $100 million housing discrimination case with the Justice Department and separately settled a Federal Trade Commission case for $750,000. He also reached an out-of-court settlement in his $500 million lawsuit against Univision’s decision to dump him as a partner for the Miss USA pageant. He settled a lawsuit with a New York union, which complained that Trump hired about 150 Polish workers in the country illegally to build Trump Tower. In Trump’s telling, each time, he negotiated to a draw or better after he considered the long-term implications, both on his finances and his image. The lawsuits are just another cost of doing business.

In the Trump University case, Trump can’t imagine settling, even if it affects his presidential campaign.

“I just feel that I have to do what’s right. I always do what’s right, and the right thing to do is to not settle to lawyers that want to make a lot of money and don’t care about their clients. They care about their wallet,” Trump said in his conversation with TIME. “We’ll go to court with that one. It will be a long case but it will end up in a victory ultimately because, again, almost all of them have given great reviews of the courses.”

He is sticking to his defense of Trump University, which was branded as a real estate and investment school where students would learn from Trump or his handpicked lieutenants. Two class-action lawsuits and a case from the New York Attorney General have hung over his presidential campaign, and Trump could wind up testifying in open court—a spectacle in a campaign cycle that already has defied precedent. He is listed as a possible witness for both the plaintiffs and the defense in a case slated to start this August in San Diego.

Many of those former students have said they were coerced into giving favorable reviews, which were not anonymous. Trump disputes their account. “Do you mean 10,000 of them? All of those people who wrote those letters?” Trump said, giving a hint that he would challenge the plaintiffs’ credibility. “Those are glowing letters. In many cases, we have tapes of them of them, films of them.”

For Trump, those approval surveys are not unlike the public opinion polls that are at the center of his campaign message: People like me, therefore I am winning. “We have a tremendous approval rate from the people who took the courses and I think we’ll win that in court,” Trump said. “I expect to go to court and we’ll win that in court.”

He noted one of the original plaintiffs, Tarla Makaeff, on Wednesday officially withdraw from the case. She said she wanted out for health reasons. Trump said she wanted out because she recorded a testimonial for the program, and Trump fought to keep her breaking off from the suit. “She was such a bad witness. They didn’t want her on the case. They wanted her out,” Trump said, adding his legal team was going to call her as a witness regardless.

Trump said the sour customers were just trying to get their lessons for free. “People figure they can get money back, so people who wrote the most beautiful reviews of the course now say, ‘Oh, wow, I can get my money back,’” Trump said.

If the case goes to trail, as Trump insists it will, the star witness will undoubtedly be Trump, a masterful salesman who seldom can be forced to answer any question he doesn’t want to address. “I fully expect to testify, sure,” he said nonchalantly, saying he has no idea when that could happen.

Asked whether he would be asking for a continuance, Trump said that he would not. But he again said a trial right now would be unfair, and he criticized the American legal system overall.

If elected, Trump would not be able to push for a delay, as the Supreme Court ruled unanimously in 1997 that a civil lawsuit against Bill Clinton could go ahead, leading, indirectly, to his impeachment.

Trump said that “it’s very sad” that people would turn to courts. “Frankly, if they ever change the rules that loser pays, you’d knock your court cases down by close to 100%,” Trump said. Asked specifically if he would push such loser-pay reforms if elected President, Trump said many people have discussed the idea, but he wasn’t ready to say just yet if he would support it.

Yet Trump is not just a victim of lawsuits; he has also pursued them against others.

When a contestant in the Miss USA pageant claimed the contest was rigged, the Trump-owned pageant sued Miss Pennsylvania and won $5 million. Trump also often threatens to sue reporters during the course of a contentious interview, and occasionally makes good on those claims. For instance, he sued the Chicago Tribune’s architecture critic for a bad review of Trump Tower (a judge dismissed the $500 million suit) and Bill Maher over a joke that Trump’s mother mated with an orangutan (Trump withdrew the lawsuit). He has in turn threatened his rivals and their super PACs, as well as the Club For Growth, over negative ads.

At other times, in Trump’s telling, the threat is just as effective. For instance, he threatened the Better Business Bureau of New York for rating Trump University a D-minus in 2010. The demand on its own didn’t force the bureau’s hand, but it let Trump claim victory. As a policy at the Better Business Bureau, older complaints roll off after three years and no longer impact its grading formula. Fewer and fewer customers were complaining about Trump’s courses as he offered them less frequently, and the rating climbed to an A-plus in January 2015. The program has been listed as “not rated” since September of last year. “At no point did BBB change the rating of Trump University based upon a demand from anyone. BBB followed its standard evaluation process applicable to all businesses,” the organization said.

At other times, the threat is just as effective. He threatened the Better Business Bureau of New York for rating Trump University a D-minus in 2010. Using its rating policy, the bureau dropped reviews of the Trump initiative that were more than three years old. When those negative reviews were dropped, the rating climbed to an A-plus in January 2015. The program has been listed as “not rated” since September of last year.

For Trump, the three major cases about his school could come at huge personal costs to him. A sign he’s taking this seriously will be the man who is tasked with defending him: Dan Petrocelli, who won the wrongful death civil suit against O.J. Simpson and defended former Enron chief Jeff Skilling.

Pre-trial hearings are scheduled for May 6. If the case moves ahead, the trial would be in August, midway between the Republican national convention and the fall presidential debates. 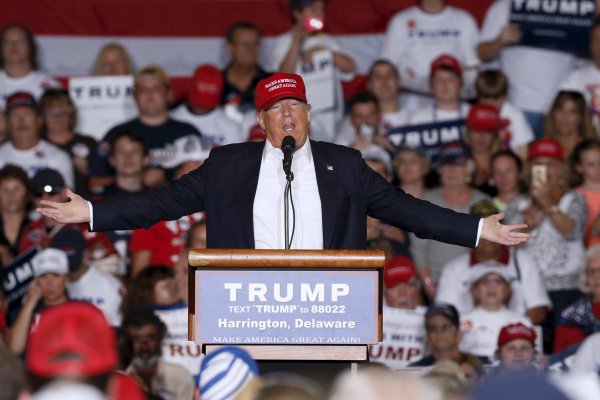 Trump Tones Down the Bombast on the Trail
Next Up: Editor's Pick