Tens of thousands of South Sudanese line up for the second food distribution administered by the ICRC since the fighting stopped in Leer and a tentative peace is holding in Unity State, South Sudan, March 17, 2016.
Lynsey Addario—Getty Images Reportage for TIME
By Aryn Baker/Leer, South Sudan

It’s just a few weeks before the start of the planting season in South Sudan’s Leer County, but 51-year-old farmer James Gatjung hasn’t made any moves to plow his lands or even buy seeds. South Sudan’s brutal civil war — tens of thousands of people, if not more, have been killed — has made it impossible to farm. “How can you cultivate the land when you are running for your life?” he asks. South Sudan’s former Vice President Riek Machar was supposed to resume his post in the capital, Juba, on April 18, putting an end to more than two years of conflict, but he has delayed his return “indefinitely,” making it increasingly likely that farmers like Gatjung will wait out another planting season, bringing the world’s newest country even closer to crippling famine.

The war started in Juba in December 2013 when President Salva Kiir dismissed his Vice President, Machar, over unsubstantiated suspicions he was attempting a coup. The conflict broke along ethnic lines, pitting Kiir’s Dinka ethnic group against members of Machar’s Nuer tribe. The war has been defined by gruesome violence on both sides, and more than 2 million have been forced from their homes. In August the two sides signed an internationally brokered cease-fire that paved the way for Machar to resume his post, but the war didn’t stop, and sporadic and widespread fighting has forced men like Gatjung to take refuge in temporary settlements. Instead of clearing land, they are lining up by the tens of thousands to register for humanitarian food packages delivered by the International Committee of the Red Cross. Most have been subsisting on little more than wild water-lily roots, fish and snails for the past few years. Some 2.8 million — nearly a quarter of the population — are at risk of famine if farmers don’t start planting this year, say aid agencies.

The cease-fire is meaningless, Gatjung says, until he has concrete proof that peace is here to stay. For Gatjung and other members of the Nuer tribe, that means seeing Machar back in the capital. “If Dr. Machar goes to Juba, I think the situation will calm down,” says Gatjung, using a popular honorific for the veteran politician, who has a Ph.D. in philosophy. “When he goes to Juba, the war will be finished, and when the peace is implemented, we can go home.” Only then, he says, will farmers return to their crops.

The opposing sides have spent the past several months negotiating over the conditions of Machar’s return to Juba: how many troops he would be allowed to bring with him, with what kind of weapons, and how many of the President’s forces would be sent to garrisons away from the city to ensure that the opposing sides didn’t clash. By early April, it seemed, both sides had ironed out the final details, and Machar’s return was slated for the 18th.

On the appointed day, cheering crowds gathered at the airport in Juba, only to be disappointed to hear that Machar’s return would be delayed a day, due to “logistical” difficulties. On Tuesday, the red carpet was rolled out again — literally — and a slightly smaller crowd waited at the tarmac. Again, a government spokesman announced that Machar’s return had been delayed, this time “indefinitely.” A government official told reporters that Machar was not allowed to come because he was attempting to bring in prohibited weapons, “an arsenal of … anti-tanks, laser-guided missiles and heavy machine guns.” Machar told al-Jazeera television that the government was setting up “obstacles” to prevent his return.

Whatever the reason for the delay, “the agreement is at risk,” says Festus Mogae, chair of the Joint Monitoring and Evaluation Commission, an international body appointed by the African Union and other supporters to oversee the peace deal. “Having come so close to the formation of the transitional government of national unity, all parties must ensure that the spirit of reconciliation, compromise and dialogue embodied by the agreement should be protected.”

The real obstacle is that peace may not be a real goal for either side. The peace accord was forced upon them by an international community appalled by the violence and fed up with the antics of a kleptocratic leadership more interested in self-enrichment than developing their newborn nation, says John Prendergast, founding director of the Enough Project, a Washington-based organization focused on the prevention of genocide. Even if Machar does eventually return to Juba, says Prendergast, he won’t be able to ensure the stability needed to set South Sudan back on its feet. “Forming a government with the same actors responsible for the collapse of the economy and atrocities holds open the possibility that grand corruption will return to its pre-war patterns. Without an emphasis on consequences for gross corruption and atrocities, it’s unlikely the deadly patterns will be broken.”

But if Machar doesn’t return soon, there won’t be much of a country left to save. That would mean economic catastrophe. South Sudan is largely dependent on oil revenues for income, and global prices are so low that the current government can’t even pay civil-servant salaries. But South Sudan can’t ask for loans if it doesn’t have an internationally recognized unity government to negotiate the terms. Its not just farmers in Leer who are waiting for Machar. He may be flawed, but President Kiir needs him too.

Correction: The original version of a photo caption in this story incorrectly described the photo. It pictured the second food distribution administered by the ICRC since fighting stopped in Leer. 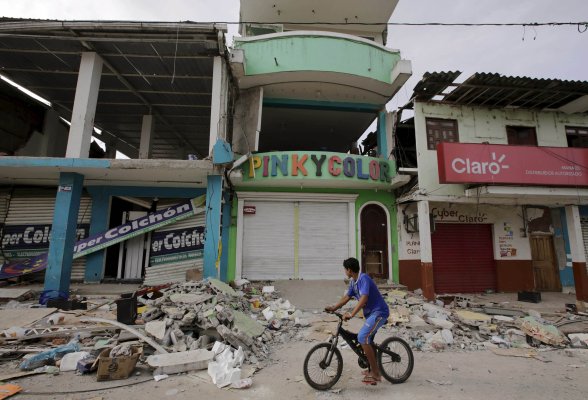