A Brief History of Harriet Tubman, Who Is Replacing Andrew Jackson on the $20 Bill

This image provided by the Library of Congress shows Harriet Tubman, between 1860 and 1875.
H.B. Lindsley
By Olivia B. Waxman

Abolitionist Harriet Tubman will replace the seventh President Andrew Jackson on the front of the $20 bill, while Jackson will move to the back, Treasury Secretary Jack Lew announced Wednesday. Following public pressure, the Treasury Department backed off a plan to replace Founding Father and former Treasury Secretary Alexander Hamilton on the front of the $10 bill, despite the campaign launched last summer that asked citizens to suggest a woman for the denomination.

While most Americans have learned about Tubman (c.1820s-1913), here’s a quick primer for those who may not be familiar with her or who need a refresher.

Born into slavery in Maryland as Araminta Ross, she changed her name to “Harriet Tubman” when she married John Tubman in 1844. When she was 27 years old, she fled to Philadelphia for freedom, then returned to her birthplace several times to help friends and family escape.

She is best known as a conductor of the Underground Railroad, the secret network that helped fugitive slaves in the South get to free states in the North or in Canada. She often dressed up her escapees in disguises and earned the nicknamed “Moses” for this dangerous work.

During the American Civil War, she was a spy for the Union, as well as a nurse, scout and cook. “Today, she is considered the first recorded African American woman to serve in the military,” according to the National Women’s History Museum. After the war, she cared for elderly African Americans at the Harriet Tubman Home for the Aged up until her death.

In 2013, President Barack Obama signed a proclamation establishing the Harriet Tubman Underground Railroad National Monument on the Eastern Shore of Maryland, and a state park in her name is expected to open in March 2017. 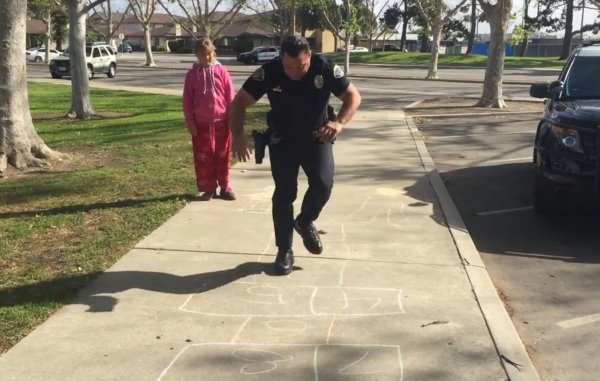 Watch This Cop Teach a Homeless Girl Hopscotch
Next Up: Editor's Pick