CHICAGO, IL - APRIL 19: Andrew Shaw #65 of the Chicago Blackhawks watches as the puck sails over Brian Elliott #1 of the St. Louis Blues on a goal by Duncan Keith in the third period in Game Four of the Western Conference First Round during the 2016 NHL Stanley Cup Playoffs at the United Center on April 19, 2016 in Chicago, Illinois. The Blues defeated the Blackhawks 4-3. (Photo by Jonathan Daniel/Getty Images)
Jonathan Daniel—Getty Images
By Daniel White

A Chicago Blackhawks player apologized Wednesday after shouting a homophobic remark at a referee during a playoff game.

Andrew Shaw, the Blackhawks’ 24-year-old center, was angry after receiving a penalty during the last minutes of Game 4 against the St. Louis Blues, when he made the remark. No audio of the incident has surfaced, according to ESPN, but video was quickly posted to social media.

When asked about the incident following the game, Shaw said he didn’t remember it, saying that he was “upset with the call” and that his emotions were high, according to ESPN, but he later apologized.

“When I got home and saw the video, it was evident that what I did was wrong, no matter the circumstances,” Shaw said in a statement. “I apologize to many people, including the gay and lesbian community, the Chicago Blackhawks organization, Blackhawks fans and anyone else I may have offended. I know my words were hurtful and I will learn from my mistake.”

The Chicago Blackhawks, who lost the game 4-3 and face possible elimination from the playoffs, also apologized for Shaw’s remarks, saying the team was “extremely disappointed” in his actions. The National Hockey League told the Chicago Tribune that it was investigating the issue, which has placed the league in the spotlight of a growing movement to stop homophobia in sports. 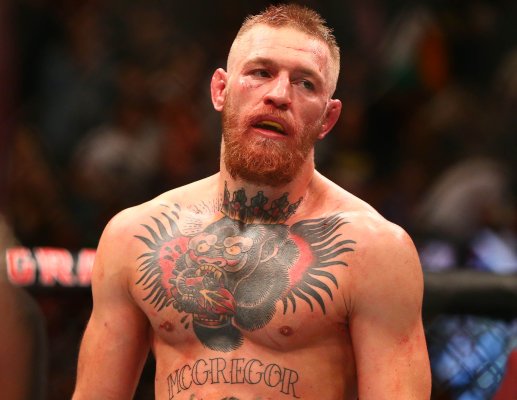 Conor McGregor Won't Be At UFC 200
Next Up: Editor's Pick