Men in white gloves guarded the gold-plated elevators of Trump Tower, as guests buzzed around waiting for The Donald to arrive.

The shops selling Donald Trump’s colognes with names like “Success” and “Empire” were closed for the event, as were the Trump Bar, Trump Grill and Trump Ice Cream Parlor. The podium was set up in front of an indoor waterfall, just yards from the stage where he had made his campaign launch last July, back when many people didn’t take his campaign seriously.

But on Tuesday night, nobody was rolling their eyes. It was the same Trump—the same hair, the same cheesy soundtrack, the same ostentatious setting—but this time he was making a victory speech after winning the New York primary by an enormous margin.

Flanked by red marble walls and backed by fellow business tycoons, Trump blasted at the idea that his opponent Ted Cruz could scoop up the nomination on a second round of voting if Trump fails to get the majority of delegates and called the GOP system of delegates “rigged.”

He entered the atrium of Trump Tower to the tune of Frank Sinatra’s “New York, New York,” a song about being a winner that sounded as if it were written for a triumphant Trump. In his victory speech, which was shorter and slightly more disciplined than some past efforts, he made clear he intended to remain king of the hill.

“Nobody should take delegates and claim victory unless they get those delegates with voters and voting, and that’s what going to happen,” he said. “Because the people aren’t going to stand for it. It’s a crooked system, it’s a system that’s rigged, and we’re going back to the old way, it’s called ‘you vote and you win.'”

Trump even used his fight against Establishment Republicans to tar his likely general election foe, former Secretary of State Hillary Clinton, expressing sympathy for problems facing her rival, Bernie Sanders, who remains behind in the delegate count in part because he tends to win smaller states.

“I am no fan of Bernie,” Trump said. “But I’ve seen Bernie win, win, win and then I watch and they say he has no chance of winning.”

Trump, by comparison, is the clear frontrunner in the GOP primary, although he still may fall short of the outright majority typically needed to win on the first ballot at the convention. But he was ahead, and he argued that’s all that matters.

“We’re leading by a lot and we can’t be caught,” Trump said. “It’s impossible to catch us.”

“We’ll be going into the convention I think as the winner,” he said, and the crowd cheered. 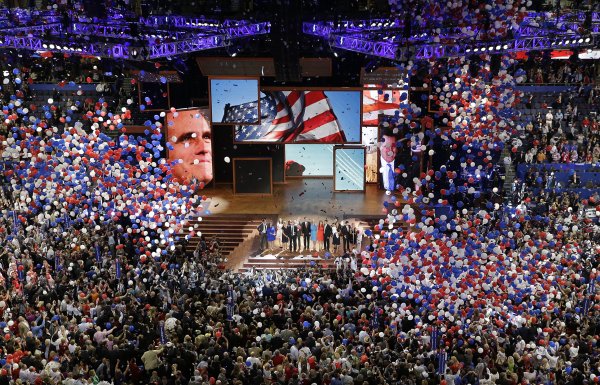 GOP Chairman: Don't Change the Rules
Next Up: Editor's Pick