Hillary Clinton and Donald Trump both hope to cement their position in their races Tuesday with expected strong victories in New York. For Clinton, a win all-but makes her the presumptive nominee of the Democratic Party, with her delegate haul making the slim chance of Bernie Sanders getting the nomination all the more unlikely. Sanders would need to win about 65% of the remaining delegates in a two-person race, which, given the strict proportionality rules of the Democratic process, isn’t going to happen. Clinton will also expand on her more than 2 million vote lead in the raw popular vote, further diminishing Sanders’ long-shot hopes to win over super-delegates from Clinton’s orbit to his campaign.

For Trump, his expected rout in New York will change the narrative after three weeks of straight delegate losses. Since Ted Cruz‘s victory in the Wisconsin primary two weeks ago, Trump has witnessed scores of his delegate slots infiltrated by rivals supporting other candidates. A big win in New York is essential if he has any hope of securing 1,237 delegates before the start of the GOP convention three months from now. The open question is by what margin Trump wins. New York Republicans awards three delegates per congressional district, with the victor only securing all three if he reaches 50% of the vote in that district, otherwise he only earns two and the second-place finisher earns one. For the state’s at-large delegates, Trump also needs to place about 50% to secure all of them. But even a blow-out win won’t guarantee he’s the nominee—he’d need to build on the momentum in the other Northeastern states voting next week, while laying the groundwork for strong performances in Indiana and California. Trump has shown signs he’s unhappy with the recent trajectory of his campaign, and is shaking up his top leadership in hopes of turning his organization around in time to lock in 1,237.

Nine months before he leaves the White House, President Obama begins the first of his farewell tours, with visits to England, Saudi Arabia, and Germany. The visits come as Obama works to keep his counter-ISIS strategy on track, and amid candid words from the president about U.S allies overseas.

The Damage Bernie’s Hillary Bashing May Do
Damage from attacks is starting to matter, especially in Clinton’s standing with independent voters [Wall Street Journal]

“I’m answering the question the way I want to answer it You want to answer it?” — Ohio Gov. John Kasich snapping at a reporter questioning him over the fact that he’s only won a single state—Ohio

“There’s no question I believe he is the best candidate. And if people want to interpret that as an endorsement, it is, but it doesn’t require any obligation on my part to have to defend every single thing they do.” — Former New York City Mayor Rudi Giuliani explaining to Fox News’ Megyn Kelly Monday why he won’t formally endorse Trump’s candidacy 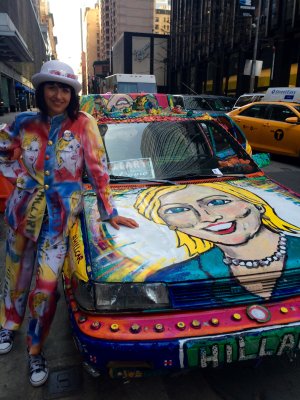 Hillary Clinton Swings at Bernie Sanders on Guns, Abortion in New York
Next Up: Editor's Pick