Komara, 67, who spent 100 days imprisoned without trial during the Indonesian government's anticommunist purge in 1965–66, tells his story on the sideline of a symposium on April 18, 2016 in Jakarta
Mast Irham—EPA
By Yenni Kwok

For the past two days, Indonesia’s focus has been on a posh hotel that stands in central Jakarta, opposite a Soviet-made statue of a farmer armed with a rifle and a woman serving him food — an image that has often been identified with communism, which remains controversial in Indonesia still. Hotel Aryaduta has been the venue for the country’s first official discussion on the anticommunist massacres of 1965–66 that saw at least 500,000 alleged leftists and leftist sympathizers killed (some say millions lost their lives) and hundreds of thousands jailed in remote gulags.

The government-supported conference, entitled “National Symposium: Dissecting the 1965 Tragedy, Historical Approach,” was attended by 200 people, including Cabinet ministers and other VIPs — among them police chief Badrodin Haiti, Attorney General M. Prasetyo, Muslim scholar Syafi’i Maarif, former First Lady Sinta Nuriyah and Sukmawati Sukarnoputri, daughter of former President Sukarno. It brought together survivors of the pogroms, scholars, human-rights activists and members of the Indonesian military, all in one room.

Read More: Indonesia Calls a Symposium on the 1965–66 Killings, but May Not Be Ready for the Findings

In his opening speech on Monday, Chief Security Minister Luhut Panjaitan — a retired general and one of President Joko “Jokowi” Widodo’s most trusted and influential ministers — said he personally wanted to resolve cases of human-rights violations but ruled out any official apology.

Following Luhut’s speech, Sintong Panjaitan, a retired general involved in the hunt of the communists, downplayed the killings. He refuted the estimated death tolls and said that only one person was killed during the military operation he led in Central Java.

Other participants, however, voiced dissatisfaction. Many survivors and rights activists have criticized the symposium for focusing on reconciliation, rather than fact-finding or apology.

Historian Asvi Warman Adam called for the government to issue an apology. “The one who should apologize is President Jokowi, because what happened in the past was the state’s wrongdoing,” Asvi said in a session on Monday.

The killing of six generals and other officers in the night of Sept. 30, 1965 and early morning hours of Oct. 1 were blamed on the Indonesian Communist Party, better known as the PKI. The army, helped by Islamic organizations and paramilitary groups, launched a massive anticommunist witch hunt across the nation. Members and sympathizers of the PKI, suspected leftists and their families were killed, imprisoned, tortured and exiled overseas.

General Suharto, who led the purges, ousted President Sukarno in 1966 and ruled Indonesia with an iron fist until his downfall in 1998. Five presidents later, Jokowi — the first Indonesian leader who didn’t come from the military and political elite — has vowed to resolve gross violations of human rights.

Although the fall of Suharto loosened restrictions on the discussion of communism and the 1965–66 pogrom, the topics are still controversial in Indonesia. In the hotly contested presidential election in 2014, Jokowi was hit by a smear campaign alleging he was a communist. Last week, days before the government-sponsored event began, Islamic hard-liners drove away the elderly members of the 1965 victims’ group YPKP 65 from their preconference preparatory meeting in the outskirts of the capital, forcing them to seek refuge at, and sleep on the cold tiles of, the Legal Aid Institute office in central Jakarta. Demonstrators from the Pancasila Front held a protest in front of Hotel Aryaduta on Monday, saying the event was “a PKI Symposium.”

Ilham Aidit, son of D.N. Aidit, the chairman of the PKI who was executed following his capture, said finding the truth behind the massacres was crucial before talking about reconciliation. “Reconciliation is necessary, telling the truth is also necessary,” Ilham said on Monday.

Speaking on Tuesday, Agus Widjojo, son of Sutoyo Siswomiharjo, a high-ranking general killed in 1965, and former military man who initiated and leads the symposium, agreed that the resolution to the 1965 tragedy needed to start with “finding the truth,” but he also added that reconciliation was necessary “so that we can make peace with the past.”

Survivors of the purges — many are now in their 70s — told heartrending stories of how their lives were turned upside down and how they remain socially ostracized. “What’s my sin?” asked Sumini, who was spent years behind bars for joining Gerwani, a progressive women’s group affiliated with the PKI.

Despite the occasionally heated exchanges and fierce disagreements on the resolution to the darkest chapter of Indonesia history, the symposium also gave the opportunity for people who were on the opposite camps in history to sit in the same panel and share their trauma. Svetlana Njoto, daughter of PKI leader Njoto, and Catherine Pandjaitan, daughter of D.I. Pandjaitan, one of the assassinated generals, told the audience how they struck up close friendship after meeting in a group that Agus co-founded to unite children affected by political conflicts. “Catherine is like my own sister,” Svetlana Njoto said. 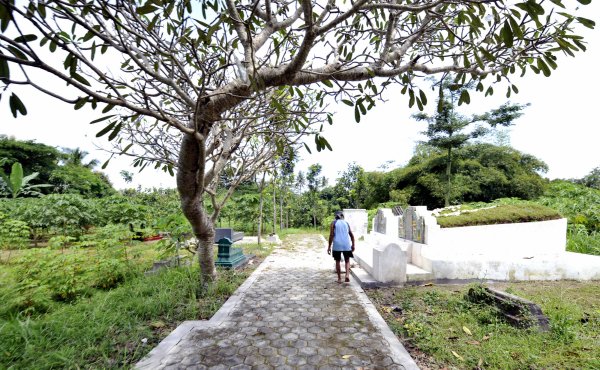 Indonesia Calls a Symposium on the 1965–66 Killings
Next Up: Editor's Pick