Surprises are great, but having a diverse lineup is better.

On Saturday night, singer Kesha joined electronic music artist Zedd on stage in a surprise visit during the Coachella Valley Music and Arts Festival. The singer’s performance—her first mainstream show since she filed suit against producer Dr. Luke—was one of a number of appearances not publicized as part of the original lineup and added something sorely lacking to the festival stage: a female voice.

Fortune.com: Samantha Bee Speaks Out About Being Skipped Over as Host of ‘The Daily Show’

For the ninth year in a row, Coachella’s headliners are exclusively male. In fact, there have only one woman has headlined the festival since it was founded in 1999: Bjork, who was at the top of the bill in 2002 and 2007.

Mainstage acts aside, women are slightly better represented in the overall lineup, with about a quarter of the 167 total acts fronted by women this year, according to a tally by the Los Angeles Times. Not great, but better than last year’s 16%.

However, these tallies don’t include surprise guests, who were plentiful during the festival’s first weekend. A number of these unexpected performances came from women; in addition to Kesha, last-minute adds included Rihanna, Lorde, Janelle Monae, Jillian Herve of Lion Babe, and Aluna Francis of AlunaGeorge.

It is unclear whether the addition of these female performers was a response to previous calls for more women, or just a happy coincidence (Coachella representatives have not yet responded to a request for comment).

While it’s great to see more women guesting and gracing Coachella’s smaller stages, putting female artists in those high-profile headliner slots remains important. As the LA Times‘ Mikael Woods writes, Coachella “has metastasized over the decade and a half since its founding into a closely watched cultural event, one that helps set agendas, not only in music but also in media, branding and style.”

Female artists deserve to be on the agenda, too. 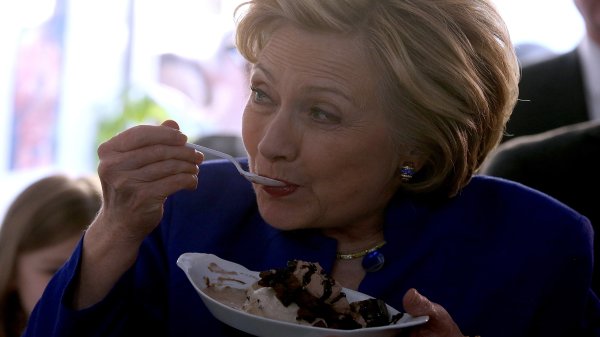 Twitter Was Furious When A Reporter Asked Hillary Clinton About the Calories in Her Ice Cream Sundae
Next Up: Editor's Pick