Climate Change Has Been Making Weather Nicer—and That's a Problem

A couple relax on deckchairs in the warm weather in Hyde Park on July 18, 2014 in London as temperatures soar to their highest of the year.
Oli Scarff—Getty Images
By Justin Worland

Climate change has actually improved weather in the U.S. over the past several decades, but that will not last for long with pleasant weather all but disappearing by the end of the century as the globe continues to warm, according to new research.

The finding, published in the journal Nature, comes as scientists and policymakers continue to grapple with how to best communicate the challenges of climate change to the public. And researchers say the study shows why the rising temperatures that are part of climate change may not be the best motivator for taking action on warming. It may be hard for Americans to see climate change as potentially catastrophic when—in the short-term, at least—it has actually improved day-to-day weather.

Read More: Cities Are the Front Lines for Action on Climate Change

“Scientists tend to say, ‘look temperatures are rising,’ but to a lot of the public that doesn’t carry a sense of alarm,” says study author Megan Mullin, an associate professor of environmental politics at Duke University. “In fact, that may come as good news.”

Previous research—and common sense—shows that most Americans appreciate warmer winters and dislike extremely hot and humid summers. The Nature study showed that 80% of Americans live in places that regularly receive better weather than 30 years ago, using those preferences as a baseline. That’s because winters so far have been warming disproportionately than summers, so Americans have gotten to enjoy less cold winter months without—so far—having to experience equally extreme summers.

That will change dramatically in the coming decades, as summer warming catches up. The study projects that 88% of the U.S. public will live in places that will experience less comfortable weather by the end of the century, barring global action to reduce greenhouse gas emissions. Even moderate action to stop climate change along the lines of what countries committed to accomplishing in Paris last year will not keep the U.S. from a significant worsening of weather, the study found.

The study confirms the wisdom in an approach taken by many savvy politicians and policymakers that avoids discussing climate change as a question of small temperature spikes. President Barack Obama’s speech last August introducing the Clean Power Plan, for instance, discussed national security implications, climate-linked health conditions and contemporary natural disasters—as well the potential for rising temperatures. Secretary of State John Kerry has said that measures to address climate change might best be explained as opportunities to foster economic growth.

“It’s possible to paint a picture of the future,” says Barry Rabe, professor of public policy at the University of Michigan who is not affiliated with the new research. “But you are more effective when you talk about the here and now.”

The evolving approach of climate advocates like Obama and Kerry, as well as the high-profile attention given to the issue by moral leaders Pope Francis, may have contributed to an increase in American acceptance of climate science. Seven in 10 Americans now say scientific evidence suggests that the globe heated in recent decades, according to a survey conducted last fall by the National Surveys on Energy and Environment. That represented a 10 percentage point jump from the same period the previous year.

But political scientists also believe that a string of unusual—and often uncomfortable—temperatures likely contributed to growing acceptance of climate science. Last month was the hottest March since record keeping began, the 11th month in a row to break such a record, and this winter was the warmest ever recorded. And, while some of that record heat can be attributed to climate change, normal variations also contributed to high temperatures. In particular, this year’s strong occurrence of the climate phenomenon El Niño contributed to the temperature spike.

“Talking about daily weather is not the best strategy to communicate with the public about the threat of climate change,” says Mullin. “In the short term, warm temperatures can increase concern. But cool temperatures can reduce concern.” 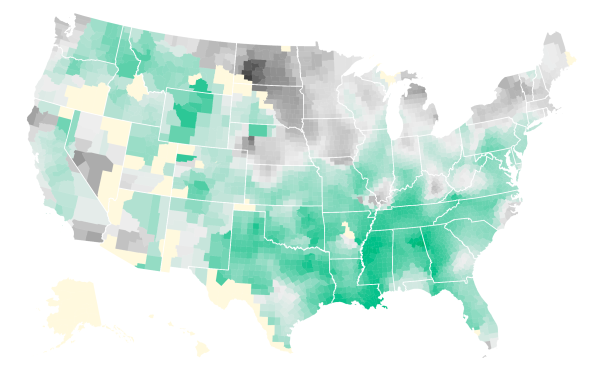 See How Much Nicer Climate Change Has Made Your Weather—And Why That's a Problem
Next Up: Editor's Pick