As Bernie Sanders barnstorms New York’s corners from Rochester to lower Manhattan, he has stuck to reciting his prophetic vision for the U.S.: the end of poverty, $15 trillion spending programs and the coming political revolution. “This is the moment in which we can transform America,” Sanders said at a packed rally in a Poughkeepsie gymnasium this week.

Meanwhile, Hillary Clinton has been talking about things like a cleanup of Long Island Sound.

At a private fundraiser in a Suffolk County wedding venue on Monday, Clinton touted a project she helped maneuver over a several-year period through the Senate, ultimately winning $25 million in annual spending to restore the Long Island Sound. Much of the federal funding was never appropriated, but it played a role in helping revitalize the mucky and polluted coastline.

Clinton’s initiative for Long Island Sound, which passed in 2006, was one of a litany of bantamweight achievements Clinton notched during her time representing New York in the U.S. Senate.

“I figured that is one of the great national treasures and assets that we have in our country, and it deserves to be protected,” Clinton told eastern Long Island’s top Democrats at Monday’s fundraiser, surrounded by glitzy chandeliers and the leftovers of a buffet dinner at Villa Lombardi’s in Holbrook.

In nearly all her public remarks here in New York as she campaigns to win the state’s primary on Tuesday, April 19, Clinton has touted the incremental victories she won when she represented the state between 2001 and 2009.

There was the New York City all-boys charter school in the Bronx for which she made herself pitch-woman. And the $900,000 federal grant for breast-cancer research she helped secure for a suburban hospital. The $20 million she helped bring in for a medical center in Buffalo; the National Air Guard base she fought to keep open on eastern Long Island.

And Clinton mentions, too, the wine ice cream business upstate she helped get off the ground: at a roundtable in Syracuse earlier this month, Clinton called the Mercer’s Dairy dessert “amazing” and “one of the top secret formulas for really producing wonderful ice cream.”

“By working together, we were able to help them create this unique product that is now, as you heard, shipped around the world,” said Clinton in Syracuse, switching gears and sounding like a corporate executive on an investors earning call.

The two Democratic candidates have always had different approaches, but the contrast between Clinton’s style of campaigning and Sanders’ has never been as clear as in New York. Sanders’ vision is grand and prophetic, while Clinton is detailed and precise. In the state Clinton represented as Senator for eight years, she has had a license to remind local voters of what her allies believe she is best at: steady progress.

For Clinton, it is the only way to campaign. “And together, we won’t just make promises we can’t keep,” she said at Thursday night’s CNN debate. “We’ll deliver results that will improve the lives of the people in New York and in America.”

Sanders has taken an opposite tack, relishing the size of his ambitions with implicit jabs at Clinton. “People say, ‘Bernie, you’re thinking too big,’” Sanders said at a rally at Washington Square Park in Manhattan on Wednesday night. “I don’t think so! What this campaign is precisely about is thinking outside of the box.”

Clinton entered the Senate in 2001 at the beginning of George W. Bush’s presidency, in an era when Republicans were warned not to sponsor legislation with the former First Lady. Clinton was forced to pull different levers as a Senator, instead pushing for appropriations and working her networks to develop the local economy.

“We realized the traditional powers of being a Senator were limited as a Democrat, so she started not only doing what she did as a traditional Senator, she tried to think differently with power to convene,” said Kris Balderston, Clinton’s first legislative director in the Senate, and later her deputy chief of staff. “It was very different use of Senate power to bring people together.”

For Clinton, no victory is too small to bear repeating with the April 19 New York primary approaching.

At a campaign event in Buffalo last Friday, Clinton recounted how she had helped secure $10 million in federal funding for the new Buffalo Niagara Medical Campus, which supports 12,000 jobs, according to its website. “We dreamed a lot of dreams together about what we could do, how we could build on these foundational strengths,” Clinton said at a roundtable there.

Stopping on Monday at the Jackson Diner in Queens, a landmark neighborhood Indian restaurant in Jackson Heights, Clinton spoke of outreach with Muslim communities in the days after 9/11. “I worked with communities shortly after 9/11 that were dealing with hate speech and even physical attacks,” Clinton said to a small and mixed group of neighborhood leaders.

In a conference call the Clinton campaign organized with reporters earlier this month, business teacher Karen St. Hilaire recounted how Clinton had pushed to bring e-commerce to a sparsely populated county upstate. The initial investment: just $25,000 from a local bank and an eBay training session with 25 entrepreneurs who wanted to sell fishing rods, moccasins and other tchotchkes.

And Clinton’s campaign released a television ad in New York City media markets on Friday touting her support for the Eagle Academy, an all-boys public school in the Bronx.

Clinton’s style of campaigning is befitting to her fine-grained approach to governing. The former Senator has long built a reputation as a careful, albeit effective policymaker, retreating from the ambitious scope of the health care overhaul she touted in the early years of her husband’s presidency.

Clinton’s 1993 effort on health care reform — which she often references on the campaign trail as her time “taking on” and flouting the drug companies and insurance industry — was a failure, but it led to the creation of the Children’s Health Insurance Program, which provided coverage to more than 8 million children.

By contrast, Sanders has introduced health care legislation in the Senate nine times over the past 20 years, but his latest health care plan is as ambitious as ever. It would raise taxes for middle-income Americans and aim to dramatically cut health care costs by guaranteeing care.

Clinton had little connection to the state before she moved to the tony New York City suburb of Chappaqua to run for Senator. She was sometimes mocked in the press for being opportunistic: a photo of her wearing a Yankees cap was widely lampooned. ”The fact is, I’ve always been a Yankees fan,” Clinton told Katie Couric on NBC as she prepared for her Senate run in 1999.

But she slowly won over New Yorkers in a diligent Senate campaign, holding a lengthy “listening tour” that brought her all over the state and endeared her to many voters. Clinton now tells a story about a maid in a Buffalo hotel she came to know over the course of her campaign who gave her a snowglobe. “She said, ‘Please don’t forget Buffalo,’” Clinton tells her audiences. “I put that on my dresser. I see that every single day.”

New York’s political elites, who have overwhelmingly endorsed Clinton, have tended to side with her approach. “There are a lot of promises in this campaign. People are making promises. There’s a lot of screaming and yelling and pontificating,” U.S. Representative Steve Israel of Long Island said in Suffolk County on Monday. “At the end of the day, the American people want somebody who just knows how to get things done.”

Clinton is best known in the state for bringing aid money back after 9/11. She met with then President George W. Bush two days after the attack and extracted a promise from the White House for $20 billion in federal aid after the destruction. She also was at the forefront of investigating health issues for first responders, steering $12 million to a related Centers for Disease Control program.

“I think her leadership through 9/11 was profound. You have to remember the state this state was in at the time. It was shaky,” said New York Governor Andrew Cuomo after the CNN debate. “It needed a hero, and she really stepped up to the plate and showed tremendous leadership that resonate with people all across the state. They still talk about it because they talk to me about it.”

But there is a downside of Clinton’s small-bore approach too. As she made her last pitch to New Yorkers in the days before the April 19 primary, not all of them remember her record.

“I’m trying to think of anything she did,” said Meredith Heuer, a 46-year-old photographer and Sanders supporter from Beacon. “It felt like it was just a stepping stone to more politics.” 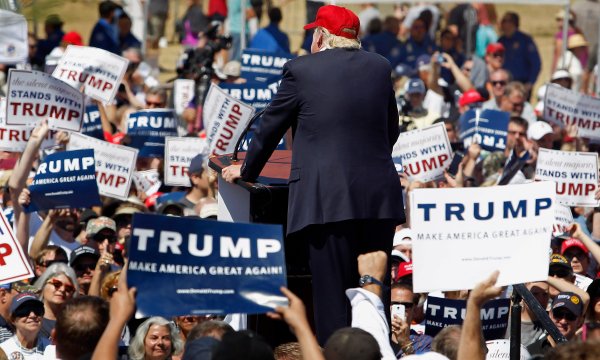 Poll: Americans Happy With Life but Angry at Government
Next Up: Editor's Pick