A group of former contestants from Donald Trump’s reality show spoke out Friday against the billionaire’s presidential campaign.

Members of The Apprentice cast held a press conference in New York, where primary voters will cast ballots Tuesday, calling out the Republican front-runner for the rhetoric used in his campaign. Season one runner-up Kwame Jakcson said Trump appealed “to the lowest common denominator of fear, racism and divisiveness in our populace,” according to CNN.

“We acknowledge Donald’s success as a businessman, and genuinely appreciate the opportunity The Apprentice afforded all of us,” Pinkett said. “We, however, strongly condemn Donald’s campaign of sexism, xenophobia, racism, violence and hate.”

Pinkett and Jackson were joined by season three’s Tara Dowdell, with Marshawn Evans Daniels from season four appearing via Skype, according to the Hollywood Reporter. Though originally scheduled to appear, season two’s Kevin Allen and James Sun from season six were unable to make it.

Trump fired back at the former reality TV stars as “failing wannabes,” criticizing the group for turning their back on him. “How quickly they forget. Nobody would know who they are if it weren’t for me,” he said. “They just want to get back into the limelight like they had when they were with Trump. Total dishonesty and disloyalty.”

Not all former cast members are anti-Trump, as season one contestant Omarosa Manigualt makes frequent television appearances in support of the candidate. The Apprentice ran on television from 2004 through early 2015 and produced Trump’s catch phrase “you’re fired!” 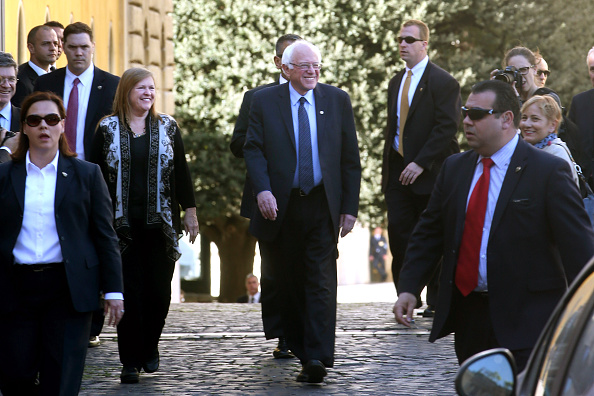 Read the Speech Bernie Sanders Gave at the Vatican
Next Up: Editor's Pick