All shows must die – even Game of Thrones. As the fantasy epic readies to launch its sixth season, HBO and showrunners David Benioff and Dan Weiss are nearly ready to confirm a seventh – and the duo are also talking about an eighth run of episodes that might include an end-date plan. “We’ve known for several years now how many hours, roughly, we want it to go,” Benioff tells EW. “It hasn’t changed.”

The proposed magic number? About 73 hours, with the final run split between seasons 7 and 8. Thrones would then have six 10-episode seasons and shortened seasons for years seven (with seven episodes) and eight (with six episodes). So this could, in theory, mark the final year Game of Thrones gets a 10-episode season – and there could only be 13 hours left after season 6.

But nothing has been officially decided, as this discussion has been going on for quite a long time and may continue well into next year. “In every conversation, that’s been [the showrunners’] thinking,” says HBO’s entertainment president Michael Lombardo of setting a season 8 end date. “It will be interesting to see how strongly they feel about being definitive about that when we are in a position to announce seasons 7 and 8.”

Some background: The Thrones team first told EW a version of this idea back in October. We’ve been holding on publishing because of the level of uncertainty involved. But Variety published an interview with the Benioff and Weiss where they essentially said the same thing, prompting HBO to release a statement: “Any conversations about the end of Game of Thrones and the number of episodes of future seasons is purely speculative. As is customary, HBO will sit with Dan and David to discuss the details once a decision has been made to go forward with season 7.”

Since this will doubtless prompt a frenzy of discussion, we’re telling you what we’ve heard so far, along with some major caveats. Keep in mind HBO and the Thrones producers might not decide to announce an end date plan for another year or more, and could eventually agree to different numbers entirely.

If the Game of Thrones team decides to drive a sword through its own production, some would consider it a Herculean act of creative integrity above financial gain. Thrones is HBO’s most popular series ever, an international sensation that gains a bigger audience every season (racking up 20.2 million viewers in the U.S. alone for season 5). Just as crucial to HBO, the series shattered Emmy records with 12 wins last fall, more than any other drama series in history for a single year. This combination of audience passion and critical acclaim is an enormous incentive for a subscription-based cable network to keep a title going – especially while fighting off streaming rivals like Netflix and struggling to find new Sunday night drama heirs. HBO’s recently launched period drama Vinyl, despite being renewed for a second season, didn’t pop in the ratings charts, while the upcoming sci-fi series Westworld has been beset by production delays.

“[Ending Thrones] will be a tough one for me – partly as an executive and partly as a fan,” Lombardo says. “A show that resonates this way and works on all levels, it’s painful to imagine it ending. At the same time, David and Dan have a big responsibility and I respect that enormously. If we just keep going then we’re doing what the [broadcast] networks have done – and nobody wants to do that.”

Since Thrones is also evolving past the story in George R.R. Martin’s novels this season, there’s no longer even fan expectations that the show will follow a certain path. This is a sprawling fantasy tale without a singular quest – there’s not a magic ring of power being carried to Mount Doom – so the producers could presumably drag the tale out beyond what they and Martin consider the most ideal path. But Benioff and Weiss have long sought to end Thrones on the most epic possible note, and the show’s notoriously grueling production pace has also become an exhausting factor. “We wanted to end while we’re still ambulatory and going strong,” Benioff says. “We love the show too much.”

Game of Thrones returns for its sixth season on April 24. 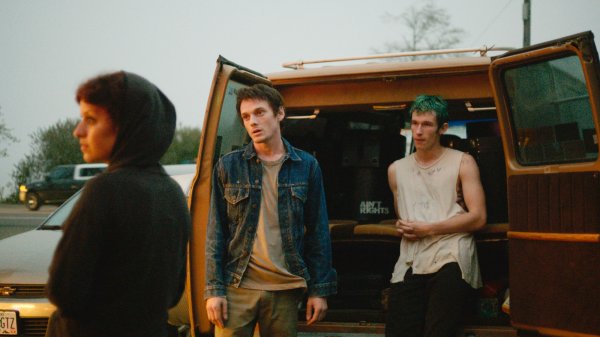 Review: Green Room Is More Unpleasant Than Pleasurably Tense
Next Up: Editor's Pick