When I was a young, words like “date rape” or “child molestation” weren’t commonly used. I didn’t understand that these experiences happening to me were something designed, codified. And then we decided to put a label on these incidents that have affected so many women. We’ve evolved in this way, but we’ve also failed to evolve in other ways. Sexual abuse is such a mysterious topic—it’s an issue that affects all people, not just women—and that’s why I think we have to be more forward in talking about it.

When you become a victim of sexual abuse, it makes you feel so lonely—like you’re the only one this has happened to. That’s one of the tragedies. It isolates you from society in that it’s this unthinkable act that’s happened to you, so you feel like it must be a solitary act. You think, “It must be just me.” The way to get to some sort of peace around it is to know that others have been through it. That’s a big part of why I just don’t shut up about my experiences with sexual assault—I want other people who’ve suffered to know they aren’t alone.

I realize that some people who come forward about their experiences face backlash because of it. But the backlash is just another way to keep you silent. When people shame survivors, it’s really another attempt to reenact abuse and to keep abusers abusing. Their need to keep us silent is their need for predators to still exist. It’s a vicious cycle that stops with the ones who are vocal. It stops with the survivor who says, “I’m not going to stay silent, and I’m going to say what happened.”

Ultimately, if you refuse to stop talking about your experience, the people who criticize you can’t do anything—and also the abusers become the ones who are shamed. At a certain point, it becomes almost fun to just keep going. When you’re speaking out about rape or sexual assault, you have the stand. You have the floor. You have all the power. When I realized that, I felt better. I realized that I have control. All of this is about loss of control, loss of body autonomy. But if you can wrest that control back for yourself, it’s incredibly healing.

Even if you can’t take legal action against your attacker because the crime happened too long ago, there is no statute of limitations on the truth. So if you tell your truth and you tell what happened, the punishment is everybody knowing, and that is very comforting. It’s almost as if the perpetrator of the crime is confined to a sort of prison when the truth is exposed. The silence is what keeps them free.

So when you share your truth and speak openly about what happened, they see that. They become terrified, and that’s the best thing is when you can inspire fear, regret and shame in abusers and predators.

Communicating about my experiences with sexual assault through art has also been very healing for me. That’s why I wrote the song “I Want to Kill My Rapist” and created the video for it. It’s about aggressively going to murder the memory through the song. I don’t believe in forgiveness, and I think it’s a really massive relief for people to let go of the idea of forgiveness. I don’t want to take the high road. I’ve always been a below-the-belt kind of person. For me, it’s very freeing to do that.

Margaret Cho is a comedian, singer-songwriter and author. 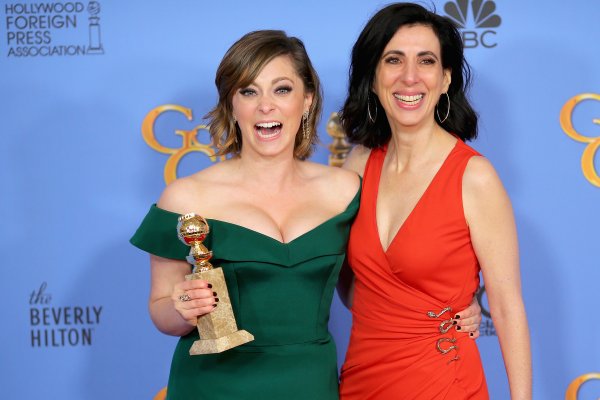 How the Woman Behind The Devil Wears Prada, 27 Dresses and Crazy Ex-Girlfriend Found Her Creative Soul Mate
Next Up: Editor's Pick