People wait in line at the Moria camp for migrants and refugees located in Mytilene, on the Greek island of Lesbos, April 13, 2016. Pope Francis will visit the island on April 15.
Guillaume Pinon—NurPhoto/Sipa USA
By Oscar Lopez / Lesbos

“We ran away from my family because they tried to kill us,” says Eli. “We love each other, but our families are enemies.”

Eli, who preferred not to give her last name for safety reasons, escaped from Kabul, Afghanistan with her husband Mustafa. The 22-year-old told how they fell in love in Kabul and were secretly married. But then her father found out. “He tried to kill me and my husband,” she says.

So she and Mustafa, 27, fled Afghanistan. They made it to Turkey and then traveled by boat for three and a half hours to the island of Lesbos, Greece. Once there, Eli says she thought their troubles were over.

Instead, they were brought to Moria camp, which, after the deal between the E.U. and Turkey, has been turned into a detention centre where some 3,000 migrants like Eli and Mustafa must wait while authorities decide whether they are worthy of asylum in Greece, or should be sent back to Turkey.

“It’s a prison,” says Eli through the fence, watched closely by security guards. “The food is very bad. There’s only cold water. We wait for breakfast until it’s lunchtime.”

Now, Eli is hoping that a visitor to Lesbos this weekend will change her fate. Pope Francis is set to arrive on Saturday, where, as well as meeting with Greek Prime Minister Alexis Tsipras, he will visit the Moria camp.

“Some people say the Pope coming here will change nothing,” she says. “But I hope that after he comes, after he sees this place, things will be better. Then we’ll go to Sweden. I hope then we’ll be free.”

The Pope arrives as numerous humanitarian organizations including MSF, Oxfam and Save the Children have condemned conditions in the camp and many have refused to support it or Greek authorities for creating what they say is a detention centre.

“It’s illogical and unethical,” says Kathleen Prior from the International Rescue Committee, which has also condemned the detention facility. “It’s punishing people for fleeing war.”

But many inside are hopeful the Pope’s visit will focus international attention on the conditions on the camps. “It’s very good, regardless of race or religion,” says Yohanes Zerazion, 40, from Eritrea. “Francis is not a politician. The E.U. and Turkey have sold us so that Turkey can get money and visas for their citizens at any cost. But the Pope, he is not a businessman. He is God’s man. He will bring attention from the world to what is happening here.”

Zerazion, who spoke to TIME from behind the barbed wire-topped fence, was less pleased with the preparations for the Pontiff’s visit. He says he and his wife were moved by Greek officials and made to set up their tent in a different part of the detention centre, behind the bathrooms, while their section of the camp was cleaned.

“Dirty toilet water was running past our tents,” he says. “They’re just trying to make a good picture. This is the same old trick as my government plays back home.”

Outside the camp, Mikhael, a 28-year-old Lesbos resident who runs a small food truck, watched warily as heavily armed military personnel arrived at the gate. “They painted the walls of the camp today,” he says, not giving his last name. “Everything clean and new. They have to give a good impression.”

For him, the main concern is security. “It’s a useless visit,” he says. “It’s too risky. Because Christians are the number one enemy of ISIS. And the Pope is the number one Christian. And the number two is the head of the Orthodox Church – he is also coming. It’s dangerous.”

Read more: A Night With the Greek Coastguard as Migrants Arrive

Though the threat of an attack from ISIS may be outlandish, security is being taken seriously. A military officer outside the camp who asked to remain anonymous told TIME that security would be tripled in the next two days.

A spokesperson for Spyros Galinos, mayor of Lesbos, said that security on the island was mostly being carried out by the Holy See itself. “Everything has passed through the Vatican,” she said, asking not to be named. “They are responsible for security. They have been here all week.”

At the refugee encampment of Kara Tepe on Lesbos, where some 960 migrants who are deemed vulnerable have been sent down from Moria, security was also tight: on Thursday, access to journalists was heavily restricted. Friday and Saturday the camp will be closed altogether.

Some in the island’s main town of Mytilene are not as optimistic about the Pope’s visit. A local acrobat named Andreas, 35, says he used to visit the Moria camp to provide entertainment along with a group of other acrobats, clowns and musicians. “Now we aren’t allowed inside and the refugees are treated like criminals,” says Andreas, who did not want his last name printed.

For Andreas, the Pope’s visit is little more than a distraction. “So much money is being spent for the Pope to come here, when it could be used for the refugees that really need it,” he says. “And afterwards, the media will leave and the refugees will stay here. It’s like chess: the refugees are just the pawns. Now we have the bishops.” 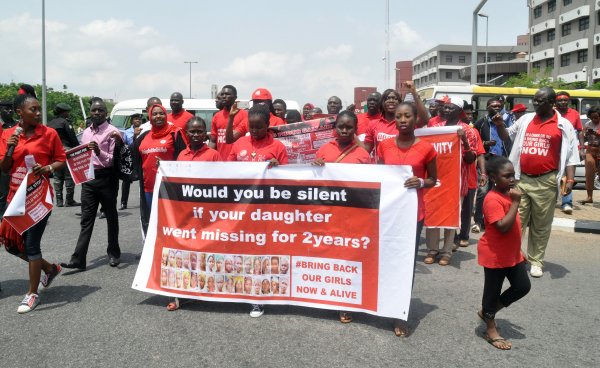 The Kidnapped Nigerian Girls Are Among the Many Victims in a War on Women
Next Up: Editor's Pick