The 7 Worst Campaign Surrogate Moments of 2016

There’s one pretty simple rule to being an effective campaign surrogate: Make the candidate look good.

There can be some nuance within that depending on who the surrogate is and what relationship he or she has to the candidate, but that’s the basic gist. If you’re going out and speaking in favor of a political candidate, you want to help that person, not hurt them.

But some surrogates still manage to mess it up. Carly Fiorina learned her lesson after 2008 when she was serving as an economic advisor to then-presidential candidate John McCain. In two separate interviews, the former Hewlett-Packard CEO said neither Arizona Sen. McCain nor his running mate Alaska Gov. Sarah Palin could run major corporations. McCain’s team yanked Fiorina from further public engagements on McCain’s behalf.

Now Fiorina is back, stumping for Texas Sen. Ted Cruz after her own failed bid for the presidency, and this time she’s been an effective, on-message surrogate.

She could teach some of the other 2016 campaign surrogates a lesson. Here are the seven worst surrogate moments of this election cycle:

Ben Carson for Donald Trump: “Are there better people? Probably.”

Carson has proved to be a phenomenally bad surrogate for Trump. After the former neurosurgeon endorsed the GOP frontrunner in March, he’s consistently undermined him in the media. In perhaps the ultimate example of this, he mused to radio host John Catsimatidis in April, “Are there better people? Probably.”

Santorum tripped out of the gate when he endorsed Rubio, failing to name a single achievement of the Florida Senator’s in one of his first television appearances for him. “I guess it’s hard to say they’re accomplishments,” former Pennsylvania Sen. Santorum said on MSNBC’s Morning Joe in February. “The bottom line is he didn’t get accomplishments done, neither did President Obama.”

You know it’s not a good moment as a surrogate when something you said winds up in an attack ad against your candidate.

Madeleine Albright for Hillary Clinton: “There’s a special place in hell for women who don’t help each other.”

At a rally for Clinton in February, former Secretary of State Albright told the crowd, “There’s a special place in hell for women who don’t help each other.” It’s a line she’s used for years, but it proved controversial in this context, coming off at best as dismissive of women who support Vermont Sen. Bernie Sanders, and at worst as implying that women have to support Clinton just because of her gender. Albright eventually had to apologize for the remark.

Albright isn’t the only female surrogate who has gotten in trouble over gendered remarks to Clinton supporters: feminist icon Gloria Steinem landed in hot water the same week when she said some women weren’t backing Clinton because “the boys are with Bernie.”

Ben Carson on Donald Trump: “I have to look at what is practical.”

While Albright implied that people should consider gender in voting for Clinton, Carson was a little too honest about his motivations for backing Trump. Just four days after endorsing Trump, Carson basically admitted that he likes him the least of the remaining GOP candidates. “I have to look at what is practical. I didn’t see a path for [Ohio Gov. John] Kasich, who I like,” he said on Steve Malzberg’s Newsmax TV show. “As far as Cruz is concerned, I don’t think that he’s going to be able to draw independents and Democrats unless he has some kind of miraculous change. So I have to look at what is practical and what is going to save this country and the American dream for the next generation. Is there another scenario that I would have preferred? Yes. But that scenario isn’t available.”

Chris Christie for Donald Trump: “I wasn’t sitting there being held hostage.”

New Jersey Gov. Chris Christie hasn’t said anything damning about Trump since he endorsed him, but he did a really bad job looking happy during their first public appearance together. Christie seemed so miserable standing behind Trump at the Super Tuesday press conference that memes of him went viral, and he had to explain later, “No I wasn’t sitting there being held hostage, no I wasn’t sitting there wondering, ‘Oh, what have I done.’”

Paul Song for Bernie Sanders: “If we continue to elect corporate Democratic whores…”

Speaking to almost 30,000 people at a Sanders rally in April, health care activist Dr. Paul Song said, “Medicare-for-all will never happen if we continue to elect corporate Democratic whores who are beholden to big pharma and the private insurance industry instead of us.”

Sanders has decried personal attacks throughout his campaign, and was quick to condemn Song’s use of the word “whores.” “Dr. Song’s comment was inappropriate and insensitive. There’s no room for language like that in our political discourse,” Sanders tweeted the next morning. Even Song himself apologized the night of the speech, saying, “I am very sorry for using the term ‘whore’ to refer to some in congress who are beholden to corporations and not us. It was insensitive.” But the hashtag #DemocraticWhores still flew to the top of Twitter’s trending list.

Ben Carson on Donald Trump: “Tell me a politician who doesn’t tell lies.”

And of course, we return to another Carson gaffe to finish the list. It’s probably not a great idea to admit your candidate is a liar, but that’s exactly what Carson did in March on The View. “Unless you say you’re a child molester, he’s a liar,” host Joy Behar said, referencing a campaign attack in which Trump compared Carson to a child molester. “Do you want a liar for the presidency?”

Instead of defending Trump, Carson replied, “Tell me a politician who doesn’t tell lies.” 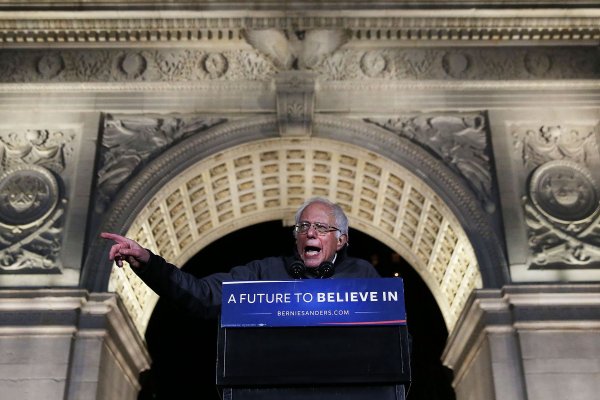