A sign marking the location of the TransCanada Keystone underground oil pipeline in Moberly, Mo, on Nov. 20, 2015.
Jeff Roberson—AP
Ideas
By Ken Ilgunas
Ken Ilgunas is the author of Trespassing Across America.

When I trespassed across America in 2012 as part of my 1,700-mile hike along the proposed route of the Keystone XL pipeline, I fell in love with South Dakota: its big skies, its gently rolling grasslands, its herds of deer and pronghorn. Despite being hit by blizzards and stampeded by cows and called “crazy” every day, South Dakota would settle into my memory as one of the grandest places I’ve ever visited.

Most of this land, though, was considered by TransCanada, the Canadian pipeline company that wanted to build the Keystone XL, to be “low consequence,” a designation that TransCanada sought to apply so that they could use a thinner pipe.

On April 2, 2016, some of this low-consequence land was soaked in oil because of a leak in the Keystone 1 pipeline near Freeman, S.D. TransCanada responded by requesting the FAA to create a no-fly zone above the spill.

The original low-consequence sum of 187 gallons of spilled oil—just enough to fill a kiddie pool—soon increased 90 times to 16,800 gallons. Oil was discovered on 300 square feet of farmland by a neighbor of landowner Loren Schultz. TransCanada pulled out soil around 275 feet of pipe in their search for the leak, which TransCanada would eventually call “small,” despite it having just spurted out benzene-laced tar sands oil over a football field-sized piece of land.

The spill—the largest in South Dakota in Keystone 1’s six-year life—is certainly a mess that an ogreish and shady pipeline company would want to hide, but it’s probably not the only thing TransCanada doesn’t want us to see. In the Heartland, states with tar sands pipelines have been dealing with lousy leak-detection systems, toxic and difficult-to-clean spills and pitiful tax revenues for years.

The Keystone 1 pipeline stretches from Hardisty, Alberta to Illinois and Oklahoma. The pipe, which started pumping oil in 2009, was approved by President George W. Bush and advanced through the application and construction process without much trouble. These were the years before the Keystone XL, when pipelines were relatively uncontroversial and easy to build.

Some states wanted the Keystone 1 so badly that they gave TransCanada generous incentives, like Kansas, which gave TransCanada a baffling 10-year tax exemption. Nebraska may have buyer’s remorse, too, as it watch its annual tax revenue from TransCanada decrease year to year (from $7.6 million in 2012 to $5.9 million in 2015, according to data from Bold Nebraska). In Nebraska, the pipe will be valueless and cannot be taxed after 15 years. South Dakota lost out on big money, too, when it gave TransCanada (a company with $64 billion in assets) $14 million as part of a contractor’s excise tax rebate. TransCanada projected they’d pay $6.5 million in property taxes to South Dakota for the first year of operation, but from 2010 to 2013, South Dakota received an average of only $3.4 million.

With all of this money that TransCanada is saving, you’d think they could invest it into their “state of the art” leak-detection system, which, Bill McKibben, the founder of climate advocacy organization 350.org, wryly tweeted “involves passerby noticing pools of oil.” The leak-detection system uses sensors to monitor for leaks, but the truth is that the general public reports 22% of spills nationwide, according to Inside Climate News, which analyzed data from the Pipeline and Hazardous Materials Safety Administration between 2002 and 2012. In that same time period, only 5% of leaks were detected by remote sensors.

In just its first year, the Keystone 1 sprung 35 leaks, including a 21,000-gallon gusher at a North Dakota pump station. When North Dakota rancher Bob Banderat went to check on his cows, he saw a 60-foot-high geyser of oil. He reported the spill over the phone, and he said that TransCanada asked him if he was joking and put him on hold for five minutes.

TransCanada’s leak-detection system is designed to detect high-volume spills, but it has reported that its sensors are not able to detect leaks beneath 1.5% to 2% of the pipe’s flow rate, which means that the Keystone 1, which carries about 500,000 barrels of oil a day, could theoretically leak as many as 420,000 gallons every day without their sensors detecting it. This flaw in TransCanada’s detection system likely contributed to the recent South Dakota spill, which was caused by an anomaly on a girth weld, where there was an observed leak of two drops per minute.

The South Dakota spill is another ill-timed blunder for an industry reeling from its unlikely loss over the Keystone XL, which President Barack Obama rejected last November 2015. Dominion Energy’s Atlantic Coast Pipeline, a 550-mile pipeline that would go through West Virginia, Virginia and North Carolina, is being aggressively fought by protestors, as is the Northeast Energy Direct, a proposed 188-mile gas pipeline that would bring fracked gas from Pennsylvania and New York to New England. In February 2016, a Kentucky Supreme Court let an appeals court decision stand that had killed the Bluegrass pipeline.

Environmental leaders believe that the rejection of the Keystone XL has bolstered the movement against pipelines.

“I think people now believe that they can win,” said Jane Kleeb, founder of Bold Nebraska, an advocacy group that opposed the Keystone XL. “[They think,] ‘if a state like Nebraska can beat a pipeline, so can we.’”

The recent spill may make things even harder for the Dakota Access Pipeline, a proposed pipeline that would cross South Dakota while transporting oil from North Dakota to Illinois. The pipe has been subject to strong opposition from landowners, tribes and advocacy groups.

Paul Seamans, a South Dakota rancher who opposed the Keystone XL, a grassroots agriculture and conservation group, says the Freeman spill might serve as a warning for other states contemplating pipelines.

“To me, the spill is good news,” said Seamans. “I’m happy it happened. It shows the dangers of spills from even new pipelines. This spill was less than thirty miles from where the Keystone 1 is bored underneath the Missouri River. We should all consider ourselves fortunate that it didn’t happen there.”

It’s uncertain if the other proposed pipelines will fail the way the Bluegrass and Keystone XL have, but it’s clear that, in America, no pipeline is a safe bet anymore. Pipeline companies’ futures may be in jeopardy, but that won’t bother a lot of ranchers and farmers of the Heartland. To some, that may be a matter of low consequence. 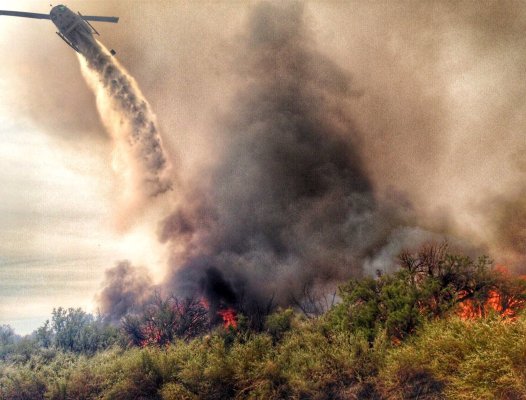 Raging Arizona Wildfire Has Consumed 1,400 Acres
Next Up: Editor's Pick