If you liked the first season of Netflix’s Unbreakable Kimmy Schmidt, you’ll like the second. Kimmy is still indomitably chipper; Titus is still a charming narcissist; the pop-culture references come fast, furious, and gleefully devoid of context. In terms of the show’s core values, there’s no sophomore slump here.

That’ll come as good news for both the fans who’ve turned Tina Fey and Robert Carlock’s first post-30 Rock television series into a zeitgeist hit, if not necessarily an actual one (Netflix doesn’t release viewership numbers). And it’s better news for the streaming service, whose series tend to get renewed and plug along in a nice little groove—as far as we can tell some three years or so into the service’s prominence—forever.

But I’d spent the time between season one’s drop, last year, and the release of new episodes Friday hoping that the show’s core values might be leavened, somewhat. It’s a bit surprising that Unbreakable Kimmy Schmidt thrives on a streaming service, because its devotion to shock over insight yields meaningless discomfort more often than it does insight. The jokes are still, often, wildly funny (and they come densely-packed enough that if you don’t like one, you’ll have all of 15 seconds to wait), but it seems more clear than ever the unpleasant point Unbreakable Kimmy Schmidt is working toward: That all of us, especially the viewership, are dupes.

The plotting, wending and oddly paced in the first season, has basically been tossed out in the first six episodes of this new season, which actually represents an improvement. The vignettes of Kimmy’s life looking for love and money in a cartoonish inversion of Sesame Street‘s 1970s-era New York are more nourishing than the protracted trial that ended season 1, just as the episodes of 30 Rock dealing with a work crisis for Liz worked better than plot arcs about Jack’s love life.

But certain threads remain. Jacqueline (Jane Krakowski), once a princess of Park Avenue, is still coming to terms with her American Indian heritage, a narrative choice I’d say the show has no choice but to commit to if it didn’t seem to quite so relish scenes of a white co-star in a wolf shirt, flannels and chunky beaded earrings, talking about refusing to give into “white culture.” The joke, here, is that Jacqueline is behaving like an idiot for committing so fully and suddenly to a heritage that’s both hers and not hers (she’s perpetually bumping into things because she’s ditched her ice-blue contact lenses, and refuses even to get clear ones).

For a show whose central figure is a naif, Unbreakable Kimmy Schmidt is poisonously savvy about the case it builds—that manners (or a perceived culture of political correctness) are the enemy of free discourse. That’s a point that’s well-made when Kimmy doesn’t get why her love interests think her childlike enthusiasm is a bit extra. It goes beyond the edge of reason in this season’s third episode, in which Titus (Tituss Burgess) puts on a one-man show about the life of a geisha. It shouldn’t escape the viewer’s notice that the only time Titus has ever been shown as a successful artist is the time when he put on a show that’s comically over-the-line; suddenly, he’s a genius, just in time for those P.C. thugs to shut him down!

His play, “Kimono You Didn’t,” gets protested by The Forum to Advocate Respectful Asian Portrayals in Entertainment. Certain capital letters in that group’s name get set off in different colors, when the name is shown onscreen, to emphasize “R.A.P.E.”—perhaps history’s most labored rape joke. (Coincidentally enough, it’s an Asian-American character who’s the least amenable to blue humor on Andrew Dice Clay’s new sitcom, Dice; Fey and Clay both are wise enough to know that certain types of humor truly cross lines in our current political climate, and find a safe group to mock.) When the protestors come to Titus’s show, they’re unambiguously bullies, proven wrong by the sheer quality of Titus’s work. “It’s like, I can’t breathe,” one Asian woman says, before realizing she’s co-opted the language of the Black Lives Matter movement (not exactly, but at this point, why not just go along?). “I’m not allowed to say that! I offended myself,” she says, before immediately ascending into heaven on a light beam.

Given a huge amount of resources and a second season of a wide-ranging show that could deal with any topic, Fey and Carlock put together an episode all about how they are oppressed, and how their oppressors are acting in bad faith to seek attention. It’s a strange choice, particularly given Fey’s adamant and frequent claims that she doesn’t care about those who criticize her humor: “There’s a real culture of demanding apologies, and I’m opting out of that,” she’s said, which is fine! I really admire the episode of 30 Rock dealing with Jezebel and modern feminism, which made sharp points about how Fey can be criticized unfairly. But there wasn’t the flabbiness there that defines Unbreakable Kimmy Schmidt. There’s a big difference between being unapologetic and declaiming, at length, on how those who want you to apologize should apologize to you, baiting them in the process.

Kimmy‘s first season made its share of missteps. A dull musical sequence, “Daddy’s Boy,” existed to make the unimaginative point that “Daddy” could refer to a father or a sex partner. And I’m unsurprised that Fey’s own extremely unsympathetic portrayal of Marcia Clark in the first season has come to be re-evaluated after The People v. O.J. Simpson suggested Clark was something more than a dunce, but the show basically got a free pass at the time. Sure, it was kind of funny, but it was humor by the “edgy” board game Cards Against Humanity: Clark was a target chosen without precision and fired at with heavy artillery. It didn’t, and doesn’t, sit well.

This season’s equivalent is a version of Robert Durst played by Fred Armisen, who doesn’t really say anything funny but certainly does remind us that Robert Durst is a weirdo who probably killed someone. He’s a litmus test: Think this isn’t funny? Then you are humorless. The second season isn’t just doubling down on a say-everything ethos that loses sight of character and plot in favor of being daring. It’s an elaborate defense of itself. Apologies may be the enemy of comedy. But demanding an apology as the price of admission is hardly much funnier.

Correction: The original version of this story incorrectly described Kimono You Didn’t. It is a one-man show. 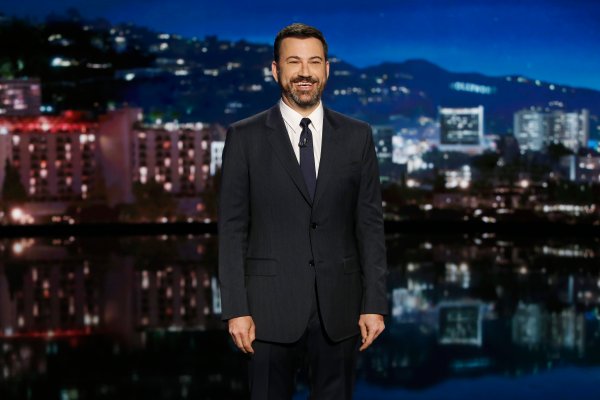 Do Americans Know More About Super Heroes than American Presidents?
Next Up: Editor's Pick