A biological mechanism that helps coral prepare for extreme temperature conditions may vanish as average water temperatures rise in the near future, making widespread coral death in the Great Barrier Reef more likely, according to new research.

The study, published in the journal Science, comes as a global bleaching event caused by warmer than average water temperatures associated with El Niño has sucked the life—and color—out of many of the world’s reefs. The current bleaching event—along with 75% of past episodes—likely benefited from a protective mechanism triggered as temperatures rise gradually, one that likely reduced the quantity of coral that died during bleaching events by 50%.

But that protective mechanism will lose its effectiveness in the coming years, even with a sea temperature rise as slight as 0.5 °C (0.9°F), according to the study. And its loss could will likely make it more difficult for coral to survive future bleaching events. “Reefs that lose their thermal protection in the future will degrade faster and stay in a degraded state for a longer period,” said study co-author Juan Ortiz, a marine researcher at the University of Queensland, in a press release. “Reefs that maintain their protection have a better chance of maintaining coral cover.”

But even for those coral with the protective mechanism, the threats of bleaching will only grow in the coming years as global warming intensifies. The ongoing bleaching event, which has lasted an unusually long two years, could kill off more than 15% of the world’s coral by the time it ends, most likely in the coming months as El Niño fades.

The death of coral presents a slew of problems both for local communities and for efforts to curb global warming. Coral reefs draw tourists, provide a habitat for fish species and act as a barrier protecting coastlines from storms and flooding. Globally, they store carbon dioxide that would otherwise contribute to the warming of the Earth’s atmosphere.

Saving the reefs won’t be easy. Marine scientists say the world’s coral reefs could be severely degraded in a matter of a few decades without dramatic action from governments to reduce greenhouse gas emissions. Nearly 200 countries agreed last year to work to keep global temperatures from rising more than 2°C (3.6°F) by 2100, but recent temperatures spikes suggest warming may be close to hitting that benchmark already. And even a world that is only 2°C warmer may not be all that habitable for restoring coral populations.

“You can’t grow back a 500 year old coral in 15 years,” says study co-author Mark Eakin, a coral reef specialist at the National Oceanic and Atmospheric Administration (NOAA). “In many cases, it’s like you’ve killed the giant redwoods.” 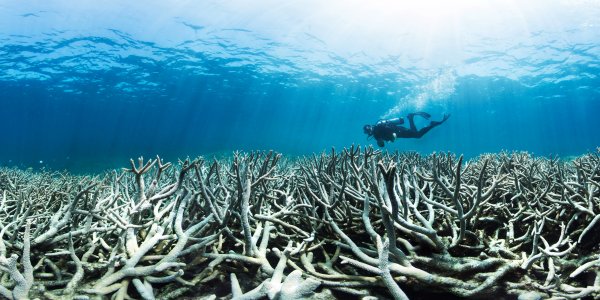 The Great Barrier Reef Is Under Attack
Next Up: Editor's Pick