Meet the Priests Who Risk Their Lives Defying the Mafia

Father Antonio Aguanno was due to prepare for mass one Sunday last month when he discovered a donkey’s head in a plastic bag at the church’s entrance. The priest’s appeal for peace in Vita in the north-west of Sicily after a series of violent incidents was not welcomed by the local mafia and they had responded with a stereotypical warning

Police say that the priest was previously visited by two men who attacked him for the language he had used in sermons but he has not commented further.

The donkey’s head was the latest attempt by the disparate groups that make up the mafia in Italy to intimidate anyone who crosses them. Priests, as leaders of communities, often find themselves at odds with the mafia with sometimes deadly consequences.

Father Cosimo Scordato, a priest in Palermo, has been the victim of intimidation and has documented it in a book, Oh, Lord, Deliver us from …the Mafia. He estimates that there have been 20 high-profile cases of the mafia intimidating priests in the last four years but hundreds more that are unreported.

”Since the church stood up against the mafia, the bosses lost social consensus in their controlled neighborhood,” says Scordato, “Now the church is saying to them [the mafia] ‘no, you are so far away from being a Christian.’ And the mafia never like a ‘no’. So, the acts of intimidation against priests in Italy have been increasing.”

Read More: How the Mafia Make Millions Out of the Plight of Migrants

Since the end of the Second World War, the church has often been accused of pandering to the bosses. In Sicily, the presence of a priest in the family has always guaranteed authority and prestige to the mafia. The uncle of Calogero Vizzini, a celebrated boss in rural Sicily, was Bishop Giuseppe Scarlata. Two of Vizzini’s brothers, Giovanni and Giuseppe, were priests and lived in his house. In 1974, Father Agostino Coppola, parish priest in Cinisi, Sicily, secretly celebrated the marriage of Toto Riina, while he was on the run.

But things changed in 1993, when Father Pino Puglisi condemned the mafia in Palermo. He was killed on Sept. 15, 1993, on his 56th birthday. He was beatified in 2013. In March 1994, Father Giuseppe Diana was killed in Casal di Principe, near Naples, by the Camorra.

The deaths reflected a change in policy by the church to the mafia, which continues today. Father Luigi Merola, 43, followed Puglisi’s example and denounced the drug trafficking of the Camorra in the Forcella area of Naples, but has survived.

Forcella is one of the main strongholds of the Camorra. Drugs are sold in daylight and guns are easy to find. When Merola was assigned to the parish in 2000, Forcella was at the center of a war between the Giuliano and Mazzarelli clans. On March 27, 2004, Annalisa Durante, 14, was caught in the crossfire and fatally wounded.

Merola did not remain silent. ”During the sermon at Annalisa’s funeral,” he says, by telephone, “I came down hard on the bosses. I knew their men were present in the church. I said the Camorra was the ruin of the neighborhood and we needed to beat them to continue living.”

The words of the sermon spread around Italy. It was a declaration of war and Merola knew the risks he faced. ”From 2000, I began to report the trafficking of the Camorra, ” says the priest. “I noticed alleys of Forcella were full of cameras. The police had not put them there. The bosses had put them there to keep an eye on movements into and out of the streets. I climbed to the top of a ladder and smashed them, one by one. Then I delivered the pieces to the prosecutors.”

Soon after, Merola noticed that he was being followed. “They came to my house in the middle of the night, armed with guns. Then, in late 2004, the police informed me they had heard, via a wiretap, that the boss of Forcella, Luigi Giuliano, had decided to eliminate me. ‘We’ll kill him on the altar’ Giuliano said to one of his men. That same day the state assigned me a bodyguard.”

Read More: Meet the Mafia Hitman Who Killed 80 People and Will Be Free in 5 Years

Merola stayed in Forcella until 2007 when he was transferred to a Neapolitan villa which had been confiscated from the Camorra. In 2007, the building was given to the the charity Voice of the Child that Merola set up to keep children off the streets and out of the hands of the Camorra.

Merola continues to stay vigilant with the help of the Italian authorities; in 2014 gunmen opened fire at his car but did not injure him. ”We priests have tremendous power in these neighborhoods, forgotten by the state,” says the priest, “Because it is in the poorest areas of the country that the majority of the faithful are concentrated. And it is in these areas that the mafia takes advantage of the silence of the church to advance their interests. The bosses feel protected by God.”

Religion has always been at the heart of the different mafia in Italy. The Camorra pray to Saint Januarius, the patron saint of Naples for assistance and in Palermo, Reggio Calabria and Naples, it has become customary to halt religious processions outside the homes of the bosses to pay tribute to them.

Father Antonio Coluccia is being persecuted by a Roman mafia for being outspoken and he has also transformed the confiscated home of a mafia boss into a home for the poor and drug addicts.

”When I arrived in Grottarossa in 2009, the neighborhood was in the hands of criminals and drug dealers,” says the priest by telephone, “Their targets were the poor of the area, drug addicts who they would sell heroin to or kill if they did not have the money to pay for it. I realized that to help the poor, the church could not be limited to welcoming them, but had to go further. We had to stop the drug trade.”

The violent warnings started in 2014, when Coluccia’s house and car were vandalized. In June 2015, two men opened fire at Coluccia, missing him but slightly wounding a passerby. ”They did not want to scare me,” says Coluccia, “They wanted to eliminate me.” A few months later, he received a bullet in an envelope accompanied by a message: ”You talk too much.”

Luigi Ciotti, president of the Libera association against the mafia abuses in Italy, attends a convention at the Unicredit tower in Milan, Nov.7, 2014-Luca Bruno/AP.
Luca Bruno—AP

The priest did not stop talking from his altar. ”The church has remained silent for too long. Those days are over. Now it is time for words.”

Of all the priests that are in the cross hairs of the mafia, Father Luigi Ciotti is paramount. The priest founded the Libera organization which identifies and takes confiscated assets from the mafia and puts them to humanitarian use.

”As the boss Marino Mannoia once told the FBI, the mafia fears a church that interferes with their business,” Ciotti tells TIME. “Interfering means openly asserting the incompatibility between the mafia and the Gospel. In this sense, the actions and words of Pope Francis, against the mafia and corruption, are of great encouragement to strip the boss of their pretended faith.

‘”The mafia feel unpunishable, even before God. However the God of the mafia is false, made up for their own use, an accommodating entity,” says Ciotti, “Because, in the end, if you think about it, the God of the boss is not a God, but a Godfather like them.” 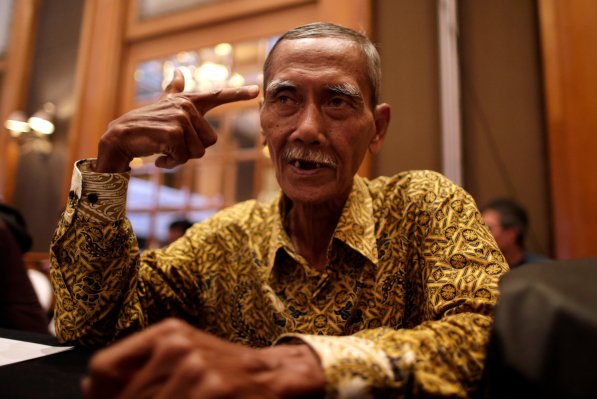 There Were No Apologies at Indonesia's First Hearing Into the Savage Killings of 1965
Next Up: Editor's Pick