You don’t often hear central bankers say, “I don’t know.” That’s because monetary wizards, like brain surgeons and rocket scientists, tend to cultivate an aura of omniscience. Their vast underground computers crank out supposedly precise answers to complex questions about where the global economy will be in the next five minutes or the next five years. But Federal Reserve Board Chair Janet Yellen has never been allergic to uncertainty.

In a recent interview with TIME, she made it clear there are plenty of things about the economy both at home and abroad that the Fed—not to mention economists, investors, politicians and the rest of us—doesn’t grasp right now. Unemployment has dropped to pre-crisis levels, but wages remain stagnant. The traditional relationship between job creation and inflation seems to have broken down. More and more technology has not boosted productivity, as it has in the past. Asset classes like stocks or bonds no longer move together in the ways they used to. In short, the global economy is playing by new rules, rules Yellen and the Fed itself are trying to puzzle out. “Sometimes you have to make decisions without knowing all that you would like to know,” she says. “That’s part of the job.”

This new reality is partly the result of the $29 trillion that central bankers pumped into the global economy over the last few years. (The Fed alone dumped $4.5 trillion in the U.S.) Central bankers were forced to take such steps because gridlocked governments didn’t act to put more fiscal stimulus into their economies after the 2008 financial crisis. They became, as economist Mohamed El-Erian has written, “the only game in town” for propping up growth. The downside of the recovery: distortions in corporate debt and equity markets and the risk of another crash.

The Fed has frequently been criticized, particularly by Republicans but also by some on the left, for continuing to keep rates low in such an environment. By many metrics, the American recovery is improving, and easy monetary policies have been known to encourage risky financial behaviors of the sort made infamous in 2008. But Yellen sees herself less as a wizard that backs into numbers via computer models and more of a family doctor who’s taken an oath to first do no harm. “We necessarily operate in an environment in which there’s a great deal of uncertainty,” she notes, talking about everything from the Chinese financial markets to the future of European integration. “In such an environment, it makes sense to use a risk-management approach to identify and avoid the big mistakes. That’s one reason I favor a cautious approach.”

Will Savers See a Fed Rate Hike This Year?

Yellen, in other words, is not keen to rely only on old models. Rather, she is sending scouts out to map the new landscape, measuring and analyzing data. The hope is to be able to quickly change tack as the economy continues to twist and turn and confound.

For Yellen, “risk management” means doing everything she can to keep the U.S. recovery on track, employment especially. That’s one reason rates remain low. If she had to choose between worrying about financial bubbles or jobs in the Midwest, she’d choose the latter. It’s an approach consistent with her kitchen-table approach to economics—more focused on the empirical than the theoretical. That’s a big shift from past regimes at the Fed, which have trended toward the academic. “We are focused on Main Street, on supporting economic conditions—plentiful jobs and stable prices—that help all Americans,” she says.

MORE: The Panama Papers Reveal the Secret World of the 1%

That’s not to say that Yellen is ignoring the sort of market distortions that the last few years of loose monetary policy have engendered. In a 2014 speech, she made it clear that higher rates aren’t the only way to head off bubbles. Regulation can also help. “Efforts to promote financial stability through adjustments in interest rates would increase the volatility of inflation and employment,” she says. “As a result, I believe a macro-prudential approach to supervision and regulation needs to play the primary role.”

Translation: the Fed is stepping up its game as a financial regulator. It’s a mandate that has gotten a bit dusty over the last several decades as Fed chairs have focussed more on the other two parts of the mandate: keeping unemployment and inflation low. But it’s one that Yellen would like to bring back. Already, the central bank has issued cautionary notes about the frothy technology and commercial real estate sectors. Look for more such warnings, as Yellen, continues to transform the Fed and leads the U.S. through its new economic wilderness. 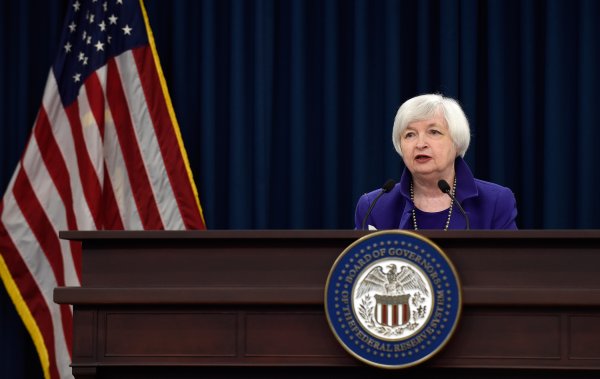