Ruby Rose Says 'She Turned Me Gay' Is Her Show's Catchphrase

Ruby Rose has never been one to shy away from talking openly about sexuality—and her recent interview with Galore is no exception.

“I think being strong is sexy,” the actress said.

As part of the conversation, Galore asked Rose about how people “love to say that you turn straight women gay.” In response, Rose insisted that’s not a thing.

Read more: Ruby Rose Opens Up About Life With Depression

“When people say to me that I turned them gay, I just laugh because that’s not really even a possibility,” she said. “It sounds like I did something against their will in the middle of the night, as if I crept into their brain and pushed the gay button, then did an evil laugh and left them to fend for themselves—newly gay and alone in the world. I break it down like this: Did I find Channing Tatum in Magic Mike to be extremely hot? Yes! Could I now turn straight for him without having previously ever had a desire to be with a man? The answer is, nope. Haha. But people will say to J. Law, ‘I want to be your best friend,’ or to T. Swift, ‘I want to be in your squad.’ Everyone has got their little thing, and the catch phrase I got after Orange was, ‘She turned me gay.'”

At the end of the day, the Orange is the New Black actress says she doesn’t care about labels. “I’m one of those people who feels everybody is somewhere on the spectrum,” she said. “I don’t think it needs to be labeled. Love is about the person.” 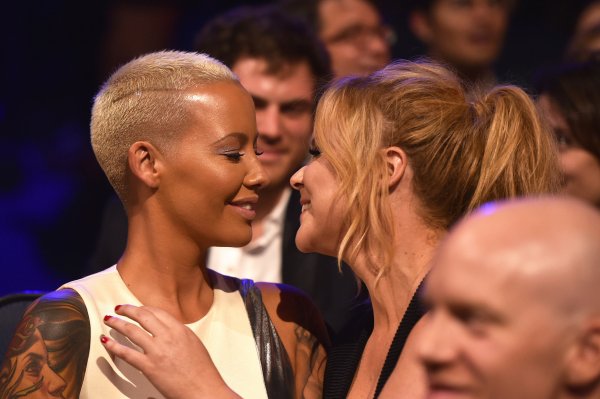 Amy Schumer Celebrated Her Kiss-aversary With Amber Rose on Instagram
Next Up: Editor's Pick