After months of widespread speculation and quiet experiments, Facebook is officially adding automated “bots” to its Messenger chat app.

The Menlo Park, Calif. firm is releasing tools that will let developers create the bots, which can handle customer service queries, plan travel itineraries, or provide a weather forecast within the messaging app.

“No one wants to have to install a new app for every business or service they want to interact with,” CEO Mark Zuckerberg said at the company’s F8 Developer Conference in San Francisco, Calif. Tuesday. “We think you should be able to just message a business in the same way you message a friend.”

Starting immediately, developers will be able to use a Facebook-created tool to host computer-controlled conversations with their followers within Messenger. The search feature in Messenger will now allow people to browse the available bots.

During his presentation, Zuckerberg briefly showed off a bot from CNN, which could answer a user’s request for news updates. In another presentation, Facebook Head of Messaging Products David Marcus walked through the process of using a bot to shop for sneakers from an online retailer. The purchase process used a mixture of in-line messaging, browsing images and confirmation buttons typical of commerce apps.

“You need a hybrid approach of conversational elements and [user interface],” Marcus said.

Facebook has spent the last couple of years making big bets on messaging as the next dominant ecosystem for mobile devices. The company bought WhatsApp for an eye-popping $22 billion in 2014, and spun off the direct messaging feature of Facebook into a separate app, now known as Messenger. Today Messenger has more than 900 million monthly users, WhatsApp has more than 1 billion, and the two combined process more than 60 billion messages a day. Traditional SMS texting peaked at about 20 billion messages per day, according to Facebook.

With such scale, Facebook now believes bots can supplant apps as the primary way we buy things and access information online. “We download fewer and fewer apps, and we certainly don’t turn on push notifications for new apps anymore,” Marcus said. The company’s hope is that offering a more streamlined, user-friendly experience via messaging can help spur social commerce, an area that’s received lots of hype but has yet to translate to significant sales.

Some developers are already excited about bots’ potential. Poncho, a weather forecasting service based in New York, is launching its Messenger bot April 12. The bot, targeted at younger users, aims to present the weather in an entertaining way, nimbly responding to people’s comments even when they veer off topic to talk about food or movies. The startup has enlisted an entire staff of comedy writers to help make the bot engaging and keep its jokes fresh on a day-to-day basis.

“We want to establish a little bit of an emotional connection,” says Poncho CEO Sam Mandel. “It’s not just about pure functionality . . . We really want Poncho to be your first bot friend.”

Ultimately the bots will be geared toward helping both Facebook and businesses boost their profits. The company is already experimenting with ads in Messenger, but stresses that users will be able to block any bot that gets too annoying. Poncho, meanwhile, plans to experiment with the kind of branded promotions that are common among social media stars on YouTube or Snapchat. It’s not yet clear how different developers, or Facebook itself, will make it clear what’s an ad and what’s not.

Facebook’s ambition has long been to “connect the world,” but Zuckerberg pulled out an updated slogan as he outlined the company’s 10-year roadmap: “Give everyone the power to share anything with anyone.” That “everyone” will now begin to include brands in a big way, at least on Messenger. Say hello to an even more convenient way to live a digital life (potentially), but goodbye to one of the last corners of the online world that revolved almost solely around human-to-human interaction. 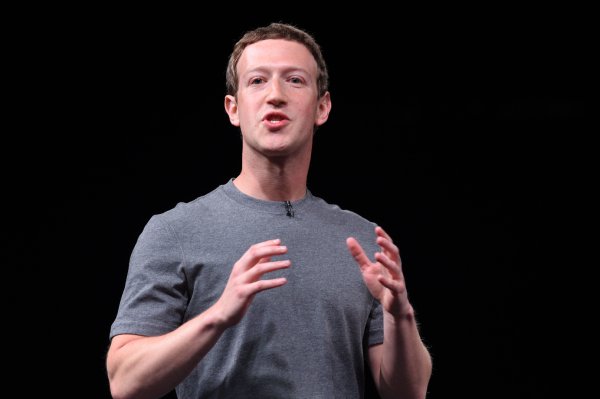