Boats at Scarborough Shoal in the South China Sea are shown in this handout photo provided by Planet Labs, and captured on March 12, 2016
Handout—Reuters
By Simon Lewis

China’s government has slammed Group of Seven (G-7) members for “taking sides” in its maritime territorial disputes with other nations in the East and South China Seas.

According to the Associated Press, a statement issued after the Foreign Ministers of the group of industrialized countries met in the Japanese city of Hiroshima on Monday appeared directed at China when it expressed “strong opposition to any intimidating, coercive or provocative unilateral actions that could alter the status quo and increase tensions.”

China is locked in increasingly tense disputes with the G-7’s only Asian member, Japan, over islands in the East China Sea, and with several Southeast Asian countries over the South China Sea — which China claims almost in its entirety. Beijing is accused of undertaking a provocative campaign to expand small atolls and reefs in waters where its claims overlap with those of Brunei, Malaysia, the Philippines, Taiwan and Vietnam.

“We urge the G7 member states to honor their commitment of not taking sides on issues involving territorial disputes,” China’s Foreign Ministry said in a riposte reported on Tuesday by Reuters.

The Philippines has lodged a case against China at the Permanent Court of Arbitration in the Hague, but Beijing has consistently rejected efforts by smaller claimants to deal with the disputes through multilateral mechanisms.

“We urge the G7 member states to fully respect the efforts made by countries in the region, stop making irresponsible remarks and all irresponsible actions, and truly play a constructive role for regional peace and stability,” China’s statement said. 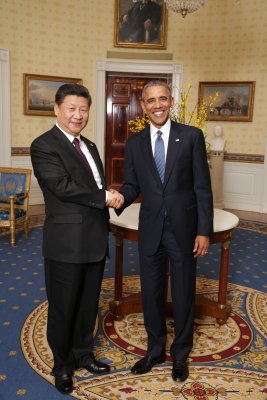