“Well, once I did watch the part when I thought my friend’s category was going to be on,” he said recently over chamomile tea in New York’s Rockefeller Center. “And my mom watches them, I think.”

He laughed a big, hearty laugh about this, flashing his giant smile, the alluring one that’s earned him troves of fans for his roles as Marquis de Lafayette and Thomas Jefferson in the record-shattering Broadway musical Hamilton.

The rapper—whose Tony nomination for Best Performance by an Actor in a Featured Role in a Musical was announced Tuesday—never saw his story heading in this direction. Born in California in 1982 to a white, Jewish mother and an African-American father, Diggs forged his path into performing early on, studying theater at Brown, where he also became a track star. He spent years working as a hip hop artist, touring with his band Clipping and even sleeping on the subway overnight when he couldn’t afford an apartment.

Now he’s on a first-name basis with the entire Obama family, has rapped for French President François Hollande and rubs shoulders with celebrity theatergoers like Beyonce, Jay Z and Jamie Foxx, to name a few.

“The incredible moments just keep piling up,” he said. “The entire day at the White House was pretty surreal. When the President says your name before you say his, it’s like, whoa.”

Diggs plays Lafayette in the first act of the show, letting his wild hair down—literally—for the second act as a gaudy, somewhat charming version of Jefferson, for whom he gets regularly recognized on the street.

“I think Jefferson’s the more recognizable character, he has more to do but also people like to choose favorites,” Diggs said. “There’s a Team Lafayette and a Team Jefferson.”

Jefferson has been the more difficult character to embody, considering that the complicated president not only owned slaves, but most historians agree he fathered children with some of them.

“It’s tricky with Jefferson because there are so many things about him that I disagree with,” he said. “The way that we made him function in the show is to make him incredibly charismatic.”

It’s this charisma that’s turned what was a small hip-hop-focused fan base of Diggs’ into a vast array of supporters ranging in all ages, races and genders.

“The funnier thing, the thing that perks my ears up, is the generational thing, when someone whose interests really predate hip hop, like someone who’s in their 70s, and they say I listened to all of your songs,” he said. “That’s a trip.”

This trip he’s on is only speeding up, though, especially with his latest Tony nomination and Hamilton‘s record 16 nominations. “I’ve been an artist for my whole life, and this happens to be the thing people know me for more than anything else, but for the smaller group of people who know me from before, they’re like, what are you doing?”

Diggs thinks of what he’s doing as reclaiming history, both for audiences and for himself.

The impact Lafayette’s and Jefferson’s legacies have on Diggs is unbelievable to the actor—shortly after his interview with TIME, he headed to Christie’s to handle Lafayette’s pistols before they were auctioned off. And in a more somber way, he said he felt a stronger connection to his French character the day of the Paris attacks.

“Toward the end of the first act I’m yelling ‘Freedom for America, freedom for France,’ and there is this political and military bond between France and the United states that I didn’t know much about before the show,” Diggs said. “I was definitely feeling things that night on stage and there were a lot more emotions, I was tearing up.”

The emotions, whether happy or sad, are only inflated by a supporting cast that’s grown to be as close as a family. Lin-Manuel Miranda, the show’s star and creator, is definitely “the oracle” of the family, Diggs says, while Anthony Ramos, who plays John Laurens and Hamilton’s first son Phillip, is “little brother.” Chris Jackson, who plays George Washington, is “pops, full of pearls of wisdom and great advice,” while Renée Elise Goldsberry, who plays Angelica Schuyler, is “kind of the cool aunt.”

“But the great thing about all of these people is that whatever role they’re taking backstage, on stage they are the most giving people. All of the hierarchy disappears,” Diggs said.

His role in the family he’s not even sure of, calling himself the lost puppy dog who’s always slightly befuddled. He said he looks up to Phillipa Soo, who, starring as Eliza Hamilton, sings a line in the show directing her family to “look around at how lucky [they] are to be alive right now.”

Diggs is looking around. He just can’t believe his luck. 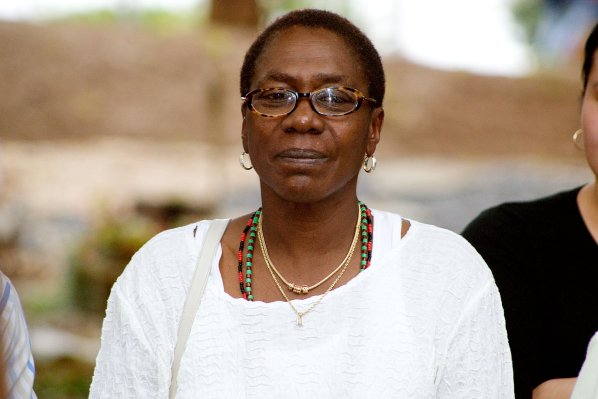 Tupac Shakur's Mother Dies at 69
Next Up: Editor's Pick